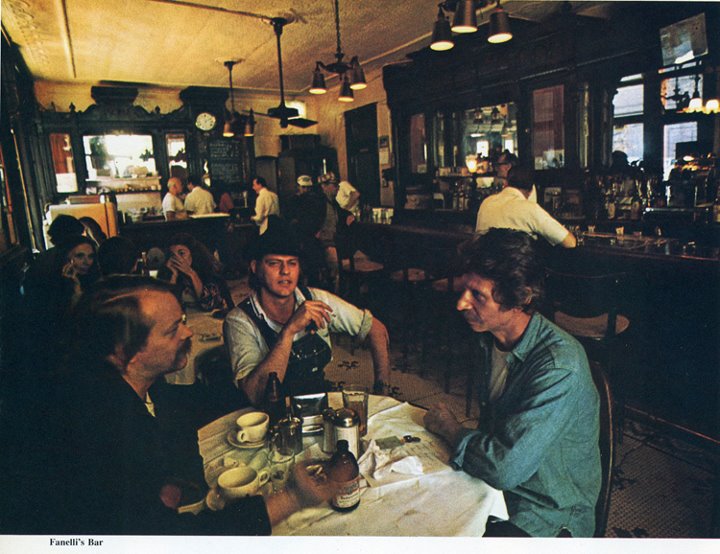 Where Everybody Knows Your Name: Placemaking and SoHo

Ken Schol Mon Levenson and another artist at Fanelli’s. Beer and coffee for breakfast. (Horizon Magazine)

Over the past few years, "placemaking" has become a buzz word in unrbanist circles. The term seems to have supplanted "community building" and "neighborhood enhancement," terms with somewhat similar definitions, as the key to (re)vitalizing and unifying neighborhoods. As defined by Wikipedia:

Placemaking is a multi-faceted approach to the planning, design and management of public spaces. Placemaking capitalizes on a local community's assets, inspiration, and potential, with the intention of creating public spaces that promote people's health, happiness, and well being.

Can you think of such a space that exists in SoHo? Do you wish we had more places like this to congregate and socialize? Karissa Lidstrand, who is completing her M.S. in Urban Placemaking and Management at the Pratt Institute, has kindly offered to write a guest post about placemaking and SoHo. The following is an extension of a finding from Chapter 3 of her thesis, Creating Seats at the Table: A Business Improvement District’s Methods for Evaluating Community Needs.

Figure 1: Food Restaurant on the corner of Prince and Wooster ca. 1973

The Struggle to Build Social Capital

When asked what community means to you, how would you respond? The term community can be very subjective. Some may think of their friends and family as their community while others may think more broadly. If you were to use that definition when thinking about community space would the result be a community center or something more private?  In SoHo community space has appeared in a variety of forms in part because of the neighborhoods land use.

Prior to World War I the manufacturing industry was booming in SoHo, as it was in many other cities across the United States. The cast iron architecture that lines the streets of SoHo was created in the late 1800s, influenced by the textile industry that located there. Legally these buildings were, and still are, zoned for manufacturing use. The manufacturing designation prohibited community facilities such as houses of worship, community centers, hospitals, and schools from being established.

It wasn’t until the textile industry gave way to foreign competitors after World War II that neighborhoods like SoHo began to see the effects of manufacturing leaving the inner city. Buildings occupied by factories in the 1800s later became vacant loft spaces post-1940. Not all manufacturing left SoHo at once, printing companies and warehouses moved into the upper floors, taking advantage of reduced rents and the large, open spaces.

The rapid decline of manufacturing in the neighborhood left the area inactive. The quick transition of SoHo to an artist community began in the early 1960s. A variety of artists saw the potential in the loft spaces as locations for their studios. Building owners rejoiced with the opportunity to rent their vacant spaces, even for a low price. As manufacturing declined and the artist community made this neighborhood their home, the lack of community facilities become more apparent.

In the twenty first century SoHo and New York City have experienced a significant amount of investment and population growth. This has impacted the composition of many neighborhoods, impeding efforts to strengthen "social capital," the relationships between residents (old and new) and the people who work in the neighborhood.

Through interviews conducted with community stakeholders the lack of community space in SoHo was identified as a concern among a variety of stakeholder groups.

Yukie Ohta, a longtime resident of SoHo, reminisced of spaces where people used to come together when she was growing up and where she would take her children. Some of those spaces included Food and the Scholastic Store. Food was a restaurant on Prince Street where locals could grab a bite to eat, artists could find employment, and neighbors could converse. It was perfect for families because below the restaurant was a play group where parents could drop their children off to interact with other kids while they sat upstairs conversing with friends.

The Scholastic Store was a neighborhood staple where parents could take their children to read and hang out for hours without the looming pressure of purchasing anything in return. Finding places to take children has become a concern given that the only major outdoor space in the SoHo neighborhood is Vesuvio Playground. For those that live on the east side of SoHo closer to Lafayette Street, walking to Vesuvio Playground on Thompson Street is at least a 10 minute walk.

Sherri Machlin, acting manager of the Mulberry Street Public Library Branch, discussed how community spaces are limited and that there needs to be more especially since the library is at capacity and has little room to grow.

Community space is more than just publicly assessable; it provides a level of comfort and facilitates interactions between community members. The lack of dedicated community space in SoHo has created a situation where residents have had to create their own.