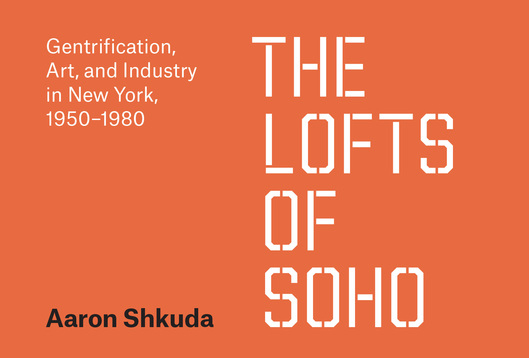 I am so very pleased to announce the publication of The Lofts of SoHo: Gentrification, Art, and Industry in New York, 1950-1980, by SMP friend Aaron Shkuda. I've know Aaron since he was doing research for his dissertation (also on SoHo) a few years back. He is now a professor at Princeton and has written this fascinating book about how residents transformed the industrial neighborhood that is now called SoHo into an artist district, creating the conditions under which it evolved into an upper-income, gentrified area.

From The University of Chicago Press:

In The Lofts of SoHo, Aaron Shkuda studies the transition of the district from industrial space to artists’ enclave to affluent residential area, focusing on the legacy of urban renewal in and around SoHo and the growth of artist-led redevelopment. Shkuda explores conflicts between residents and property owners and analyzes the city’s embrace of the once-illegal loft conversion as an urban development strategy. As Shkuda explains, artists eventually lost control of SoHo’s development, but over several decades they nonetheless forced scholars, policymakers, and the general public to take them seriously as critical actors in the twentieth-century American city.

The following is an excerpt from chapter 4 of  The Lofts of SoHo:

In February 1961, SoHo artists faced another threat that almost ended their nascent colony. This peril was not an economic downturn, the prospect of a highway, or even the early stages of gentrification. Instead, the culprits were some of the most mundane elements of urban governance: zoning ordinances and building codes. These types of regulations are meant to protect residents, and it was the issue of resident safety that caused an acute crisis in the SoHo artist community. In late 1960 and early 1961, a series of fires broke out in industrial lofts below Houston Street, leading to the deaths of four people, including three firefighters. Though none of the fires occurred in lofts where artists lived, these blazes led the New York City Fire Department and the New York City Department of Buildings to launch a series of inspections of SoHo structures.1Chapter 4 Artist Organizations, Political Advocacy, and the Creation of a Residential SoHo

Although both agencies initially reacted to a series of code violations in industrial buildings, they soon made a surprising discovery: artists living il- legally in these structures. The New York Herald-Tribune reported that city officials found at least 128 illegal apartments in the area containing “beatniks, complete with beards” living with “mattresses on the floor and works on Zen Buddhism,” along with vermin and cockroaches. In turn, Deputy Assistant Fire Chief Thomas J. Hartnett wondered how anyone could stand living in this section of Manhattan, asking, “How do they get their milk delivered?”2 This “discovery” of SoHo residents reveals an important element of the neighborhood’s early history: that the very idea of living in a loft was completely novel. Whereas lofts are now ubiquitous in urban areas worldwide, hardly any people considered living in former industrial space before the 1960s. Similarly, few observers saw artists as people with the power to trans- form neighborhoods or develop real estate, as demonstrated by the Herald-Tribune’s use of the word beatniks, the derogatory term for bohemians of that era, to describe SoHo residents; in that writer’s view, they did not even rise to the level of artist. As mentioned in the previous chapter, local building and zoning laws made no allowance for people who wanted to live in industrial buildings. As a result, when they encountered loft residents for the first time, city officials did not celebrate the possible rebirth of a struggling industrial area at the hands of artists. Instead, they threatened them with eviction.

In response to the specter of eviction, artists organized themselves politically, forming lobbying organizations and using public demonstrations and boycotts to advocate for their housing needs. SoHo artists threw the entire weight of the New York art world behind their cause. Well-known artists such as Willem de Kooning and Isamu Noguchi, as well as curators and gallery owners, spoke out in favor of loft residents. Through their advocacy, SoHo residents worked to redefine the role of the artist in society in the minds of local leaders. They argued that affordable housing for up-and-coming art- ists was crucial to New York’s future because artists were the backbone of its cultural economy, as well as the people who gave the city its reputation as the world’s leading creative and artistic center.

In making these arguments, SoHo artists placed the arts at the center of the debate about how to redevelop cities at a time of urban crisis. By finding value and beauty in outdated industrial structures, they also reclaimed prop- erties viewed as obsolete eyesores by urban renewal advocates. By pioneering new uses for lofts, SoHo residents created powerful arguments against slum clearance, particularly in industrial and commercial areas. SoHo artists also shifted the terms of the ongoing debates over neighbor- hood preservation and rehabilitation. Although meeting the housing needs of lower-income populations in central cities had long been a preoccupa- tion of policy makers, artists looked to demonstrate that they were a unique group—relatively poor people with distinct housing needs but who also had the power to drive the city’s economy and give it its unique identity. They urged city leaders to help bolster one of the few things that New York still had going for it—its reputation for the arts—by allowing artists to live in the manner that best suited them: in converted industrial lofts with room to live and work affordably. Though they fought to change zoning laws, rather than against slum clear- ance, artists developed powerful arguments that pushed the debate over the future of urban neighborhoods beyond the renewal/community defense paradigm that had dominated discourse up to that point. Unlike antirenewal protesters, who mainly focused on preserving their neighborhoods, SoHo artists posited a new future for their community. They argued that their efforts would revitalize an area shaped by deindustrialization and urban re- newal. At the same time, SoHo artists placed the arts at the center of a debate over the future of their neighborhood. To SoHo artists, urban culture could do for SoHo what other urban development schemes could not: create a vi- brant neighborhood that helped drive the city’s economy and identity. Much like the backers of projects such as Manhattan’s Lincoln Center, SoHo artists were staking out a place for culture in the city. The same New York artistic culture that could help the United States compete with the Soviet Union for cultural dominance globally could also help breathe life into moribund in- dustrial neighborhoods.3

In the end, artist groups in SoHo achieved goals that were both modest and significant. Their advocacy led to changes in two regulations that allowed only a limited number of artists to live legally in a loft. Yet these laws were the first to make it legal for anyone to live in such a structure and the first to give government sanction to anyone, artist or otherwise, to live in any former industrial space. Moreover, these policies indicated that more New Yorkers were starting to support an argument made by SoHo activists: that artists had a unique power to reinvigorate neighborhoods long ago left for dead. Thanks to artist advocacy, policy makers began to connect artist housing and urban vitality, a link that would become the foundation of theories of creative place making and the creative class several decades later. Through their actions and words, SoHo artists made the case that art could be a force for urban change.

Aaron Shkuda is Project Manager of the Princeton-Mellon Initiative in Architecture, Urbanism & the Humanities, and holds a PhD in History from the University of Chicago.

This book is available from The University of Chicago Press and at local bookstores including McNally Jackson at 52 Prince Street, and through Amazon.com.

To read another excerpt from this book please visit The Gotham Center blog.