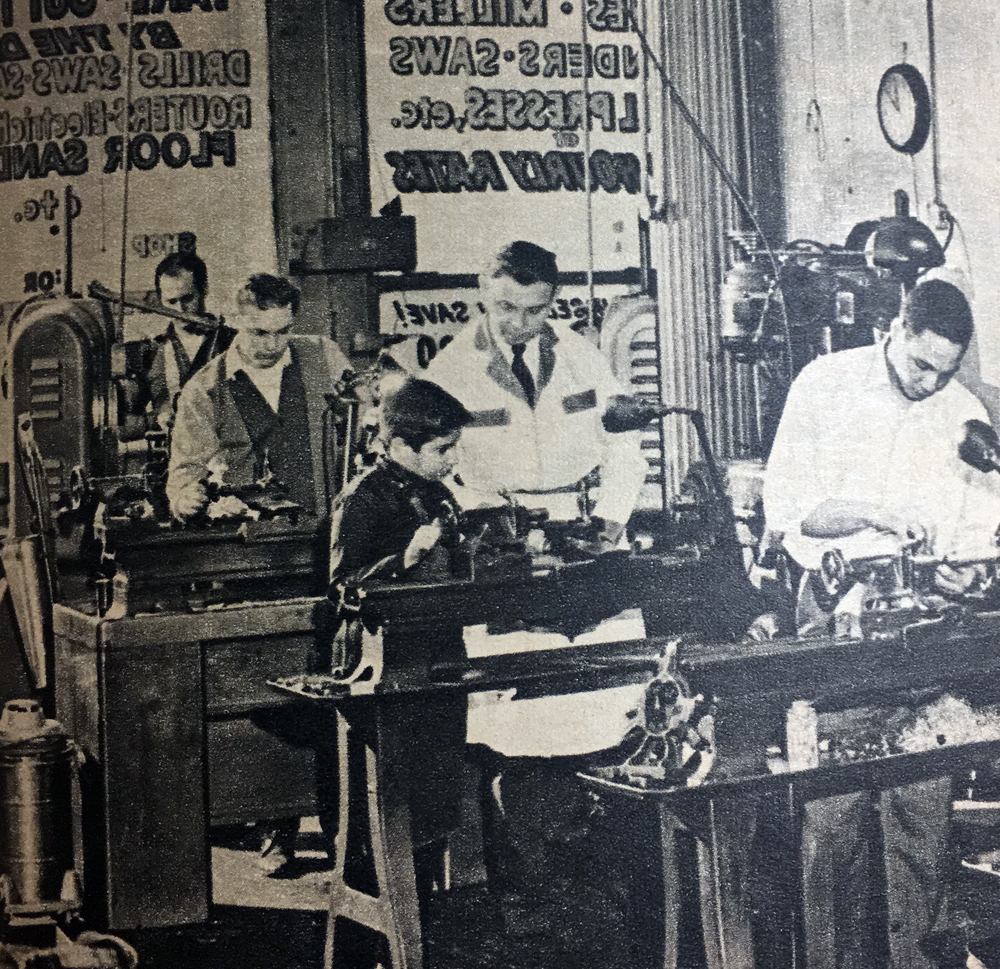 A history of 1970's SoHo would not be complete without a section about Zelf, the institution that enabled all of us to walk barefoot in our homes and avoid splinters.  I have only the vaguest memories of Xelphin Dugal (Zelf) and Rene Schwartz (Chickadee) and their store, Zelf Tool and Die Works at 44 Greene Street, so I am going to rely on the memories of others to help me tell the story of this most memorable store that was an integral part of the SoHo landscape. From the August 16, 1971 issue of New York Magazine (page 36):

Crammed into the first floor of his 1830s cast-iron-front building are a multitude of lathes, planers, pantograph engravers, band saws, welders—even a 40-ton power press.  Not only are these for rent by the hour but, and this is what makes Zelf’s really unusual, even if you’re a complete novice you can use them.  He will teach you on an individual basis (reasonable hourly charges by arrangement).  Half a day with a welding torch ($2 per hour for cutting, $3 for burning, acetylene and oxygen supplied) has convinced several sculptors to switch from marble to steel. Typical on-location rentals are: drill press 75 cents/hour, Kalamazoo band saw $1.25/hour, New Bridgeport vertical miller $2.25/hour, and Logan engine lathe $1/hour.  In a spirit of blue-collar revivalism, you punch in on a Calculagraph and take your place next to the other craftsmen working on such projects as a granite guitar or an about-to-be-patented vinyl waterbed mattress sealer. Zelf’s motto is “The fast are not held back.  The slow are not rushed.”  So work away, ask for help when you need it, and enjoy.  Hours: Mon.-Sat. 9-6.

Numerous times in 1970’s I rented sanders, edgers, buffers and an occasional hammer-drill from Zelf tool on Greene. I used my bank savings account passbook, instead of cash, for my deposit, which Zelf appreciated because he had large amounts of hidden cash and as a repeat customer I could skip the tutorial although I saw many given to the client ahead of me. He wore a hole into his floor repeating his 3-second sanding demo. His rates were the lowest because he kept patching and maintaining the machines himself.  The machine shop also rented time on the tools to inventors and machinists making prototypes and short production runs. He and Chickadee sat at a desk in the filth and dust, eating homemade vegan snacks from plastic bags. He told me that they slept in a bed he made with the head-end a foot lower than the foot end.  He had peculiar health theories and did not like “double-insulated” electric wiring (that 3rd prong on plug) even though I complained of electric shocks from using the edger near radiators. Chickadee had tattooed numbers on her arm typical of concentration camp survivors and the worst red wig imaginable. (D.K.)

I sanded a number of East and Middle Village floors in the 70s and got to be reasonably well known at the shop.  I sublet a series of apartments through a little agency on the East Side, and the owner of that agency put me on to Zelf.  The most unique story that I can contribute came from my later contacts, sometime in the late 70s. I was a psychology undergrad at NYU at the time, and somehow that came up when Zelf and I were talking.  He showed an interest in the subject of dreams, and as we chatted he shared something I have always cherished in memory: he told me his dreams.  He didn't ask me for a dream interpretation (I'm not sure how I would have responded) but he rather just wanted to share an experience that afforded him  great personal pleasure.  Zelf explained that he dreamed nightly of his companionship with two lionesses named Alpha and Beta.  They would join him as he drifted off to sleep and then accompany him through the night, and he would roam freely with them through brush and wilderness.  He spoke of them with great fondness and reverence.  I felt very privileged that he shared so personal a matter with me, and this touching inward adventure somehow seemed the perfect compliment to the vaudevillian sideshow that was Zelf's. (P.K.)

On the wall behind Chickadees desk was a sign saying that in a car, he noticed/honked for blondes and brunettes, but he backed up for redheads.  My recollection of Zelf was that he didn't actually die the graying temples/sideburns on his head, but just applied some kind of dye on the skin below those graying hairs.  Definitely a one-of-a-kind NY businessman.  (M.L.) I also do remember that Mr. Zelf (until yesterday, I thought Zelf was his last name) was quite polite and patient to us, and that Chickadee was professionally competent, when we had time to get our eyes off her hair. Of course, Mr. Zelf had that weird combover now modified and made famous by Donald Trump. (S.S.) I was there when Xelphin finished his brown bag lunch, and opened a drawer in his desk, which contained 100 or more identical neatly folded used bags. I rented from them in 1976. (C.E.)

What happened after Zelf passed away:

After Zelf died, the family did not know what to do with the business. A niece (I believe a daughter of Mr Dugal's sister, but a redhead for sure) stepped in and ran the business for years at Greene Street. She moved the business to Tribeca in the late nineties. It survived there until 2002 or 2003. I rented all kinds of tools from him and then later from her. She did her best to bring some professionalism to the business (buying new tools, expanding the selection and improving maintenance) but the floor-sander demonstration remained the main attraction. "Move the sander forward and slowly lower the drum as if landing an airplane." I think I must have earned my wings along the way. (Chris)

Boy, what I would give for a photo of Zelf and Chickadee!  If anyone has one, PLEASE send it along and I will post it.  The only memory I have myself of Zelf’s is going in there with my dad, a carpenter, when I was little, and being kind of scared.  It’s more of a sensory memory of “what in the world is going on here?” and “maybe I shouldn’t be here!”  It was no place for a kid to be hanging out. Power tools, bad hair, burning metal, vegan food.   Yuck. Thanks to everyone who wrote in to share memories of a most memorable SoHo business!