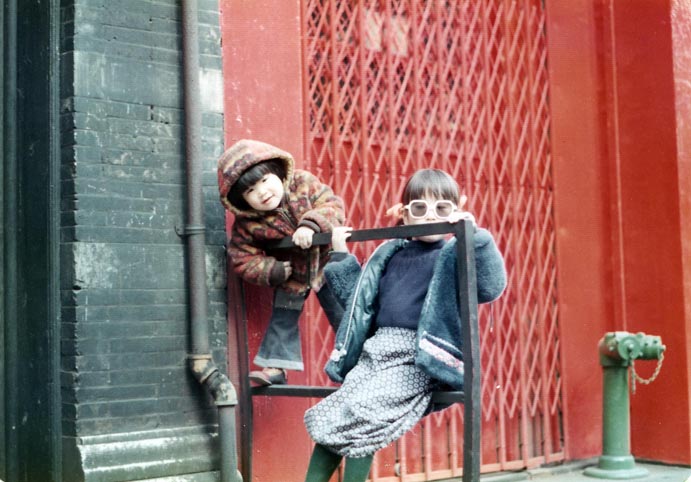 I realize that it must seem a bit strange that I am doing a profile of myself, since this entire blog is kind of a profile of me, in bits and pieces.  But I thought I'd end the year by looping back to my first post, on January 1, 2011 where I wrote that "[w]hat I would like to do, . . ., is to celebrate a very special place at a very special moment in time."

I am a product of SoHo in the 1970s.  A very special place at a very special moment in time.  My experiences growing up here have made me who I am today, for better or worse.  Since graduating from college, I have been a grants administrator, an editor, a literary translator, a handbag designer, a boutique owner, a collage artist, an archivist, a librarian, and a writer. I have also gone to graduate school twice, once in my twenties and once in my forties.  I guess I'm one of those people who is pretty good at a lot of things but not super-proficient at any or one.  Another way to look at it is that I have a spectrum of interests that I pursue avidly, more for experiencing the process than obtaining the result.  I enjoy the ride and hopefully pick up some knowledge and skill along the way.

Stereotypical parents would have plotzed long ago from the agony of seeing such a flighty and fickle daughter make her way through the world.  But my parents once said to me, after I told them that my store was about to celebrate its tenth anniversary, "You've had that place for ten years?  It's about time you thought of something else to do!"  Variety is the spice of life, and it is not shameful, rather, it is your birthright, to move from one passion to the next, and nobody will think the less of you if you did not go to law school or marry a doctor.

This was the spirit of the SoHo that nurtured me into adulthood.  This is not to say that everyone around me changed their professions every ten minutes.  Some did, some didn't.  However, it seemed to me that everyone was here because they needed a place to like what they like and be who they are without others bugging them about it.  Many of my friends' parents were artists, like my father, who found a community of  like-minded souls south of Houston Street, and their children, my peers, were able to benefit from their having been brought here, or born here.

I have often thanked my lucky stars that I was not born in rural Japan.  It could have happened, and I'm sure that I would have loved my home and my community and the opportunities they afforded me.  But what a different existence it would have been!  My mother ventured out from her home in the mountains where the kitchen had a dirt floor, the house was filled with the smell of the pigsty just outside, and the toilet was a hole in the ground where a truck came to vacuum out its contents once a month or so.  She left and followed my artist-father to New York, moving to a place where the conditions were not much better or different!  A loft space with no rooms and a coal burning stove for heat where she could not wash the windows for fear that someone would notice that they were living there illegally. Odd neighbors who would come and go at odd times in odd getups whose houses smelled odd, like an angry skunk was living in the bathroom.  Filthy streets with piles of "garbage" from which they pulled their home furnishings.

These beginnings made it possible for me to be the kind of person who goes with the flow and can be flexible, not to mention the kind of person who can withstand cold weather, having passed many winters being able to see my breath in bed.  I am not perturbed by the sight of vermin, as I have had cockroaches living in my house with whom I was on a first-name basis.  I treat everyone with the same level of familiarity and respect because growing up, SoHo was a motley community of people with such a wide variety of past experiences and future plans, none of whom had any money, so there was not an obvious hierarchy to warrant using the honorific with one person and the familiar with another.  So everyone used the familiar, by default.

But those of you who have followed this blog from the beginning know all of this.  These are the tropes to which I have returned again and again throughout this past year.  I thank you for indulging me my navel gazing and I thank you for your participation and sharing.  Going into the next year, in order to fill out this narrative, I would like The SoHo Memory Project to become more and more about memories other than my own and less and less about what I remember, although I acknowledge that the line between the two is elusive, as many of us have shared the same experiences.

Memory is also elusive,  at best an unreliable friend on whom we must rely when there is nobody else to lean on.  Our story will never all come into crystal-clear focus, but what I am hoping for, if not clarity, is to give shape to amorphousness and ambiguity.  I don't know or care if growing up in SoHo was better or more fun than growing up anywhere else, but the discussions of the past year have begun to clarify what was so special, so singular, about the experience, value judgements aside.