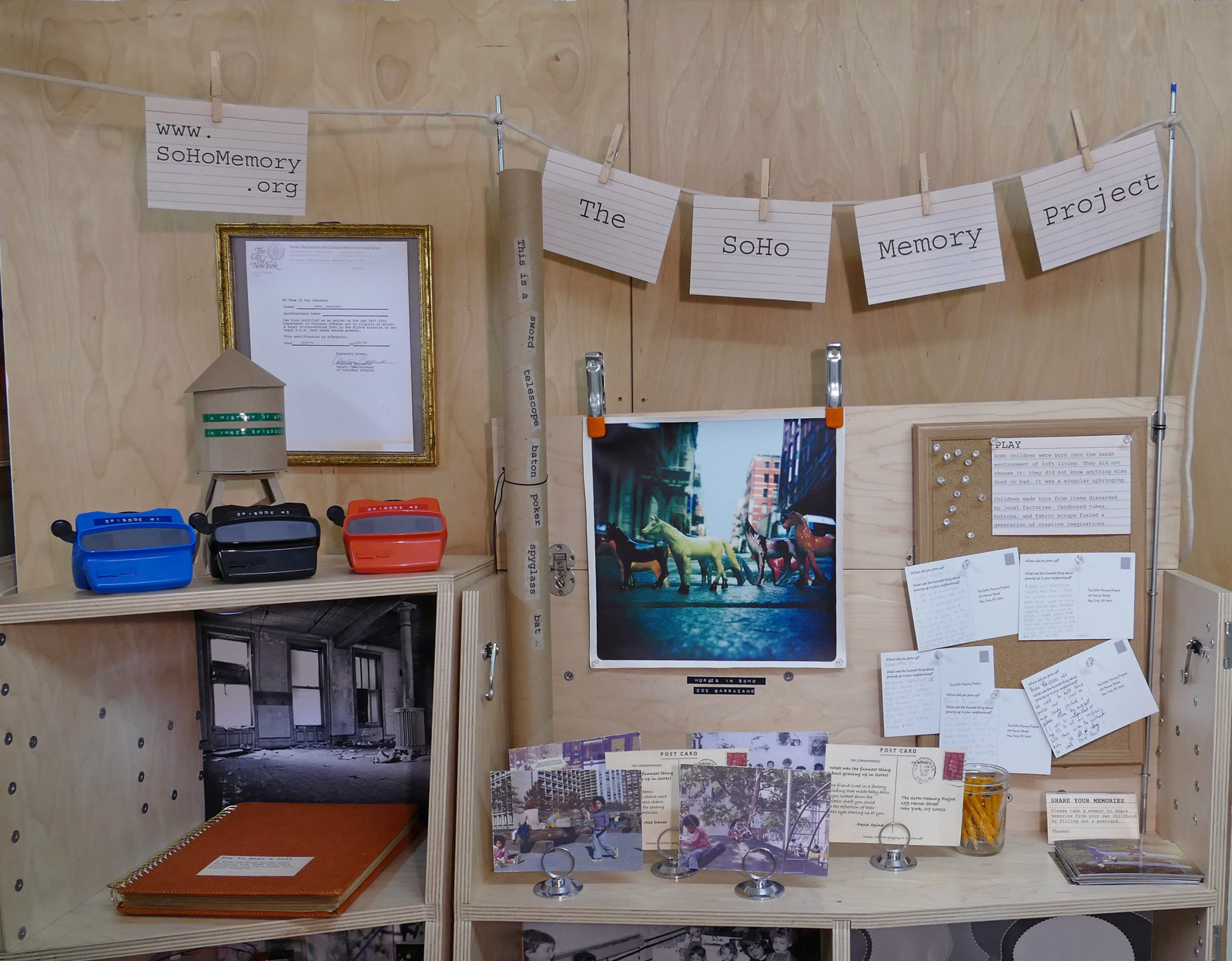 On January 1, 2011, I started writing this blog without a clue about where it would lead. I began almost grudgingly, thinking that someone ought to be preserving SoHo's important and endlessly interesting history, but not me. Five years later, I am very happy that I took the plunge, as this project has only reinforced my conviction that preservation in all of its forms is not only important, but essential to how we situate ourselves in the present and how we envision our future.

2015 was a very busy year for The SoHo Memory Project. After a successful Kickstarter fundraising campaign and a fabulous article by Kyle Spencer in The New York Times, my project expanded in leaps and bounds, keeping me busy with exciting new developments. Here's an overview of what's to come and nja recap of highlights from the past few months.

Many thanks to all of you for your continued support in input!

A visitor watches a film at the SMP Portable Historical Society

It's finally finished and ready to hit the streets! Thanks to a grant from the New York Council for the Humanities, The SoHo Memory Project Portable Historical Society will be popping up at SoHo Arts Network (SAN) member organizations throughout 2016 beginning with four dates at Judd Foundation in January and February. The Judd sessions require a reservation, and we are currently fully booked, but the mobile museum will be at The Drawing Center two weekends in February and March, open to all:

For a full schedule of events, please click here. I hope to see you at one (or more) of these sites in 2016!

From the SAN press release:

The SoHo Arts Network Announces Its First Collaborative Program, with the SoHo Memory Project, supported by a grant from the New York Council for the Humanities.

New York, NY (December 15, 2015) – The SoHo Arts Network is pleased to announce that it has been awarded $5,000 from the New York Council for the Humanities to fund its first collaborative program, with the SoHo Memory Project (SMP), a mobile museum, archive, and blog dedicated to preserving and sharing the history of SoHo as a New York City neighborhood, founded by Yukie Ohta. Five SoHo Arts Network member organizations—the Judd Foundation, The Drawing Center, the Renee and Chaim Gross Foundation, Storefront for Art and Architecture, and the Center for Italian Modern Art—will host the SoHo Memory Project’s Portable Historical Society for a series of free and interactive public sessions during the first half of 2016. The SoHo Arts Network (SAN) was founded in 2014 by a group of nonprofit arts organizations based in New York City’s SoHo neighborhood; it is dedicated to celebrating the rich history of SoHo’s unique creative community and to advancing the neighborhood’s continued cultural contributions to the lives of both residents and visitors. The network facilitates and reinforces collaboration between institutions and artistic leaders within the area, as well as the sharing of best practices.

I hope the conversations sparked by this collaboration with SAN will help situate the mythic artists’ SoHo of the 1970’s within its singular place and time in New York City’s long history. This partnership will further The SoHo Memory Project’s mission to preserve and share the history of SoHo, not only as a locus of creative foment, but as an urban neighborhood of individuals, families, businesses, and civic groups working together to form a cohesive community.

In partnership with the New York Public Library, The SoHo Memory Project had begun work on SoHo Stories: A Neighborhood Oral History Project. Although the project does not officially launch until this month, we already have a bunch of interviews up for listening.

Volunteers were trained by NYPL staff to conduct interviews in November and the program will officially launch in January 2016 and run through June. Interviews will be available for listening at the Irma and Paul Milstein Division of United States History, Local History and Genealogy of The New York Public Library and will be accessible also through The New York Public Library Community Oral History Project website and this website. Click here to listen to the stories we have gathered so far.

Hannah Rosenzweig, filmmaker and SoHo native, and I are producing a documentary film about growing up in SoHo in the 1970’s. In the coming months, Hannah will film my interviews with people who grew up in SoHo. Using this footage, along with archival footage, Hannah and I plan to tell the story of what it was like to grow up in New York’s 1970's urban wilderness. 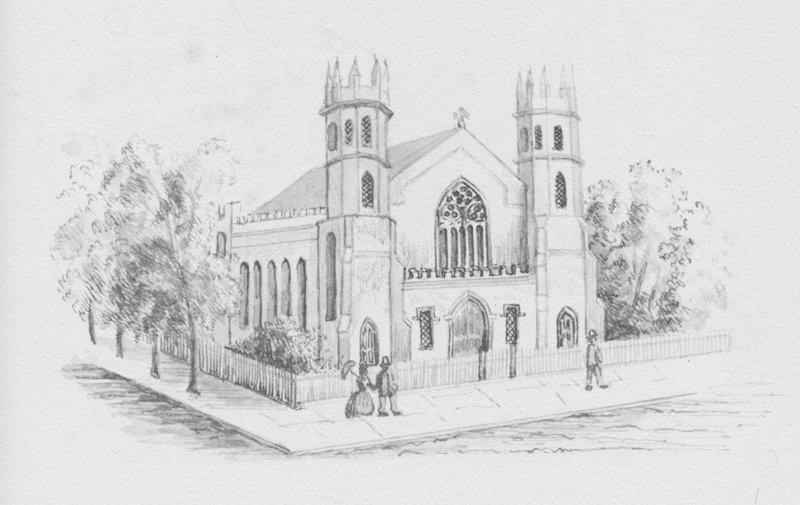 A Look Back at SoHo's Broadway

If you haven't already gotten your fill of SoHo history from this blog, I will being writing a monthly column onThe SoHo Broadway Initiative's (SBI) website called A Look Back at SoHo's Broadway about SoHo’s rich history along the Broadway "corridor" between Canal and Houston Streets. Tune in each month to read juicy stories about Broadway's interesting (and sometimes sordid) past!

And in case you missed it, here's are some highlights from the past few months:

Last month, The SoHo Memory Project was included in a list of "10 of SoHo’s Anchors and Innovators" in The Spaces Magazine, along with Judd Foundation, Fanelli's, The Drawing Center, McNally Jackson, to name a few!

On October 22, 2015, I spoke at the Municipal Arts Society's Jane Jacobs Forum on “Sensing the City,” with a focus on Jacobs’ legacy in SoHo at The TimesCenter. We had a great turnout and a lively Q and A after the presentations. Watch the entire event on YouTube here.

I was interviewed on WBGO's Conversations with Allan Wolper (former Editorial Director of The SoHo Weekly News) about my project and about growing up in SoHo. Listen to the 30-minute interview, which aired in October, here.

The SoHo Memory Project partnered with StoryCorps for an exclusive day of oral history recording on October 3, 2015. StoryCorps is an independent nonprofit project whose mission is to honor and celebrate the lives of everyday Americans by listening to their stories.

SMP invited six pairs of SoHo pioneers to participate in this project by having their 40-minute conversations recorded by StoryCorps staff at their recording booth at Foley Square. These six interviews grouped together provide a firsthand account of how SoHo was "made."  Excerpts of the interviews will be available for listening on this site soon (please stay tuned!) and they will also be preserved and archived at The Library of Congress.

There you have it, The SoHo Memory Project in a nutshell. Moving forward, I will, of course, continue to write my monthly posts and am, as always, collecting items for The SoHo Memory Archive. If you have any questions, comments, or suggestions, or if you have anything to donate to the archive, I would love to hear from you---yukie@sohomemory.org. Hope to see you in 2016!