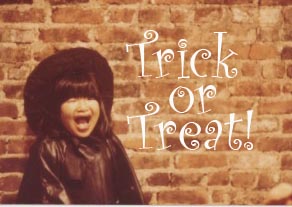 My sister dressed as a witch for Halloween, ca. 1975

Every year, when Halloween comes around, people who grew up in the suburbs often ask me, “If you grew up in the city, how did you go trick-or-treating?”  Believe it or not, there was actually some door-to-door activity, even in 1970’s SoHo.  An old-timer recalls:

[We] were the only tenants living at 94 Prince Street (the Fanelli building) and had a single, not easily accessible bell-button to ring near our darkly lit and forbidding door.  So, prearranged, 'reservations' were necessary to have our home visited on that night.  (I believe there was another family or two that also had to do the same.)

Reservations to trick-or-treat!  Only in New York!  Most of us, however, just went across Houston Street to the Silver Towers.  We would start at the top floor of a building and then make our way down, floor by floor.  One building was plenty for me, and I would go home with a stash of candy that would last until Thanksgiving.

We always used to get some really yummy home-made treats mixed in with the M and M’s and Hershey’s Kisses.  A friend recalls a parent who took her task of treat-making very seriously by “including in the little bags of treats she gave out a small-font text typed message describing the ingredients of what the goodies presented were made of!”  This was before the age of widespread food allergies, so it was merely a courtesy on her part.

I remember some ghoulishly gruesome neighborhood parties as well.  One of my friends had an annual Halloween party where the children were asked to close their eyes and stick their hands in bowls of worms (spaghetti) and eyeballs (peeled grapes).  Another old-timer recalls a guy who used to spook up is loft:

He would leave the door ajar for us. His house was all decorated, dark and scary like a haunted house. It was super scary and exciting.  [Once] he grabbed the "plastic" snake from around [my friend’s] neck and swung it around his head several times later learning it was a real snake!

And, of course, there was the parade.  But it was nothing like the bonanza it has become of late.  Back then, the parade wound through the narrow streets of the West Village, showcasing the bizarre and fantastic costumes dreamed up by local artists, and it included lots of children.  wildnewyork writes in her blog, Ephemeral New York:

…in the early 1970s, the Greenwich Village Halloween Parade was more of a small-scale bit of street theater, a mile-long walk planned by a local mask-maker and puppeteer for his West Village neighbors. It started in the courtyard of Westbeth, the factory-turned-artist lofts on Bethune Street. From there, a few dozen revelers in masks and costumes—including a man in a lobster outfit and a two-headed pig—wandered along the Village’s side streets to Washington Square.

The thing I remember most about the Halloween of my youth, however, is how cold it always was.  Not wanting to ruin the dramatic effect of my costume, I forewent the jacket and paid dearly.  Passersby may have thought I was shivering in fear of ghosts and goblins, but I was really just freezing my ass off!