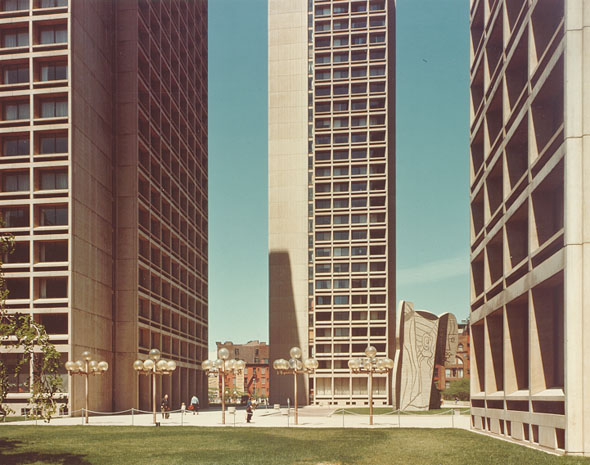 The Silver Towers, back when they still had those globe lights (photo: Pei Cobb Freed & Partners)

The other day I was sitting at the Silver Towers apartment complex watching my daughter ride her new scooter when I realized just how large a presence that Picasso statue is in my personal landscape.  The Silver Towers was (and still is) a world away from SoHo, with it's unadorned, uniform buildings guarded by doormen set around a large open public space with manicured lawns and "keep off the grass" signs (those signs have since disappeared).  Yet it was just across Houston Street, on my way to the supermarket, on my way home from the school bus stop, and the closest open-air plaza to my house.  It was the first place I ever rode a bike outdoors (after learning how to actually ride in my living room).  It was the first place I ever built a snowman.  It was the first place I ever went trick-or-treating.  It was where many of my friends from P.S.3 lived.  In the winter, the buildings form the fiercest wind tunnel imaginable, but it is also the shortest way to get home from the Village, so I brave it anyway and always swear to myself I'll never do it again.  During summer, because there is almost no shade there, it gets so hot it makes me want to weep (I'm a wimp when it comes to heat).

Picasso's sand-blasted concrete bust of Sylvette at The Silver Towers

Completed in 1966, the three towers, designed by James Ingo Freed and I.M. Pei, are part of a 5 1/2 acre complex that was part of Robert Moses' ambitious "urban renewal" program.  The tower that faces LaGuardia Place is a Mitchell-Lama middle-income cooperative building for area residents while the other two, owned by NYU, are faculty and graduate student residences.  The large concrete abstract bust in the center of the plaza sculpted by Carl Nesjar was inspired by Pablo Picasso's small metal sculpture "A Portrait of Sylvette,"  and built in consultation with Picasso himself.

In the early-1970's Christo and Jeanne-Claude wanted to wrap the Sylvette sculpture in brown fabric, but this never happened.  In the early-1980's, the towers were cited as part of I.M. Pei's accomplishments to date when he was awarded the Pritzker Prize.  In 2008, the Landmarks Preservation Commission designated the complex, including the sculpture, a landmark.

I never understood why they were called "silver" when they were really a drab beige color.  I guess The Drab Beige Towers just doesn't have the same ring to it.  Actually, I think they were named for Julius Silver, a major NYU donor, but I'm not 100% sure.  What I do know is that I used to think the Silver Towers were just about the ugliest buildings around.  Why would anyone build anything, not to mention a whole residential complex, in concrete, I would wonder.  But sitting there the other day, I realized that I actually dug it.  The beige.  The concrete.  All of it.  I love it.  There is a soothing, earthy quality to the blandness that pervades the entire "superblock," especially in stark contrast to all of the shiny glass and metal used to build the towering towers of today.  Is it nostalgia?  Longing for childhood?  Maybe.  Will I feel this way in forty years about the Time Warner Center?  Oh boy, I hope not.