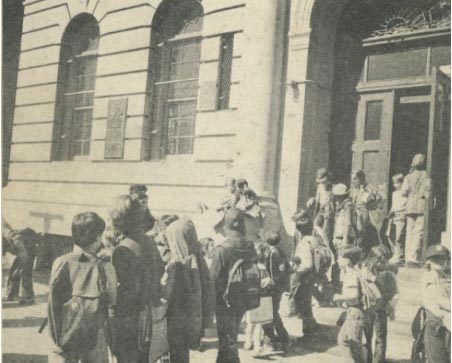 My daughter will turn four this year, which means that she will be entering Pre-K (that’s pre-kindergarten).  Back when I was a kid, we didn’t have pre-K.  We just went to playgroup and then when we were old enough, we went to P.S.3.  I don’t think we even officially lived in the zone for P.S.3, but that’s where all of the SoHo Playgroup kids went when we turned 5, and school overcrowding and variances were never an issue.

So it was a surprise to me to find out that P.S.41, in a way, begat P.S.3, back during the teachers’ strike in 1968.  According to Charles R. Simpson in his book SoHo: The Artist in the City:

A group of P.S.41 parents, a faction within the P.T.A. living in Greenwich Village, opposed the strike.  The dissidents broke the locks on P.S.3, a surplus school scheduled for demolition, demanded that it be reopened, and chose a staff from among substitute teachers.  The Board of Education, taken aback but interested in creating pressure to end the strike, paid the staff.  While the strike lasted, the parents got a taste of running a school; and when the strike ended, they demanded that P.S.3 be retained as an annex of P.S.41 in which experimental education could be carried out.  (212)

For the first few years, the parents had control over the school.  They decided, by a council of three teachers, three community members, and twelve parents, how the school was to be structured and which teachers would be hired.  The council was chaired by the school’s head teacher, who I presume was John Melser, a teacher from new Zealand who taught in the tradition of A.S. Neill, an advocate for personal freedom for children.

By the time I got there in 1974, the Board of Education had taken back control of the school, but it still retained the basic structure put in place by its founders.  John was now the principal (we called everyone, including the principal, by their first names).  The classroom had mixed grades, mostly either K,1,2 or 3,4,5, but there was one that was K-5 (taught by Fredlyn, I think), which allowed for different rates of progress and encouraged the younger students to learn from the older ones, who were in turn encouraged to guide the younger students.  There was also heavy parent involvement in the school. Many of the parents were artists who would come in to the classroom to lead art activities.  My mother came in and taught the class how to do origami.  Another parent, an actress, came in to lead improvisation exercises.  I even remember learning a little Italian.

At the core of P.S.3’s educational philosophy was an emphasis on individualism.  This, I am guessing, resulted in less cliquey-ness and more “kookiness” than in other schools.  But, all in all, I think I got as good an academic education as anyone else, with a strong sense of self and a penchant to think outside the box thrown in as a bonus (AND free breakfast—raisin bran with wheat germ).

I get the sense that over the years P.S.3 has become a bit more mainstream in terms of its approach to education but that it still holds its core character from back in the John Melser days.  I have only fond memories of John and my teachers (Lila, Edith, Annette, and Ruth) and am grateful for the strike that started it all.  Unfortunately, I do not have high hopes that my daughter will have the same privilege as I did of attending P.S.3.  As the school zones are drawn at present, the back of our building abuts the wrong side of the P.S.3 zone, and with the severe overcrowding of downtown schools, legacy or not, I cannot count on a variance.  We will not likely be starting a dynasty.  Alas, if only my name were Carrington.

P.S.  Here are the words to the P.S.3 graduation song, as I remember it, written by Lucy, sung to the tune of Sloop Jon B by The Beach Boys (please feel free to correct, amend, etc.!):

The first per son I ever drew
I said it looked a lot like you
And then we decided we would be best friends
I taught you to write You taught me to fight
You called me up for the homework
Almost every night.
Chorus: I'm graduating from P.S.3
I wonder how my life's gonna be
It's hard to leave so many memories behind
The friends that I've known
The ways that I've grown
P.S.3's been a kind of a home.

I remember when I couldn't spell
There were times I couldn't wait for the bell
But then I learned how to read and write and sing
The teachers were nice
They checked us for lice But mostly they gave us Very good advice.

Repeat Chorus
(Was there another verse after this?)