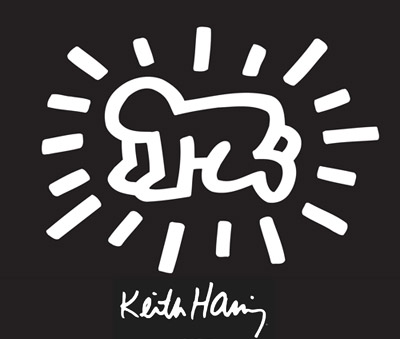 The Same Old, When It Was New

The 1970’s were the heyday of New York graffiti.  I remember sitting in subway cars so thoroughly covered, inside and out, with spray-painted tags and images that I could hardly see out the windows.

I also remember a starker form of graffiti that, although not limited to SoHo’s boundaries, most certainly originated in the downtown scene that grew out of SoHo.  Around 1980 or so, as I was getting off the D train at Broadway-Lafayette, I began to see white chalk drawings of a glowing baby in the subway station.  No words, just a single image.  The black rectangles of empty ad space were the perfect backdrop for the young pre-Pop Shop Keith Haring, who arrived in New York in 1978 to attend the School of Visual Arts, to display his artwork.  Inspired by the immediacy of graffiti, he began exploring its possibilities.  He explains in his journal:

One day, riding the subway, I saw this empty black panel where an advertisement was supposed to go. I immediately realized that this was the perfect place to draw. I went back above ground to a card shop and bought a box of white chalk, went back down and did a drawing on it. It was perfect–soft black paper; chalk drew on it really easily. I kept seeing more and more of these black spaces, and I drew on them whenever I saw one. Because they were so fragile, people left them alone and respected them; they didn’t rub them out or try to mess them up. It gave them this other power. It was this chalk-white fragile thing in the middle of all this power and tension and violence that the subway was. People were completely enthralled.

A message from SAMO in a doorway

As I exited the subway station, I would then see messages, just words, no images, some political, some just silly, written on the walls of buildings around the neighborhood:

Who was this SAMO?  Was it pronounced sam-oh, like the name?  It was later revealed that SAMO was the brainchild of the later-to-me-mega-artist Jean-Michel Basquiat and Al Diaz, his friend from City As High School (is that place still around?), who went on to become a well-known graffiti artist.  Basquiat explained that the name SAMO is pronounced same-oh, as in “same old shit,” a reference to the marijuana they smoked.  He created a comic book character named SAMO in high school.  He and his friends developed this character and took it out into the world in 1977, first as stickers and pamphlets and then as a graffiti tag with the ironic copyright symbol attached.  In a video interview with Basquiat done for the ART/new york tape "Young Expressionists" (1983), he explains that “we used to just drink Ballantine Ale all the time and just write stuff on the walls and then throw bottles…just teenage stuff…there was no ambition in it at all.”

Needless to say, Haring and Basquiat both went on to become darlings of the art world in the early-1980’s, bringing their “low” art to great heights, selling canvases for tens of thousands of dollars.  Haring’s gallery work was an extension of his street art whereas Basquiat presents a completely different style on canvas.

According to Haring’s journals (as quoted in Wikipedia), he met Basquiat quite by accident after wondering who was behind the SAMO tag:

I still hadn’t met Jean- Michael—I had only heard of him. Well, one day a kid came up to me just as I was going into SVA, and he asked if I could walk him through, past the security guard. He wanted to get inside the school. I said “sure” and we walked through. I disappeared into a class. When I came out an hour later, I noticed there were all these fresh SAMO poems and tags in places they hadn’t been an hour ago. I put two and two together and realized that the person I had walked through was Basquiat...  Later that day, I ran into him again and I asked him if the tags at SVA were his, and he said yes...

Back then, Haring and Basquiat were just kids exploring their creative impulses and following their dreams, just like everyone else in SoHo at the time.  And in doing so, they, along with an army of nameless subway graffiti artists, livened up what otherwise would have been my somewhat mundane and monochrome commutes to school, to the grocery store, and back home again.