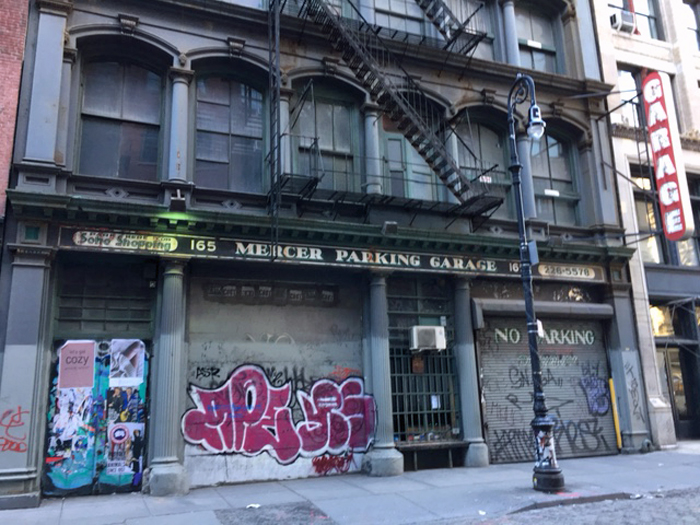 The Mercer Parking Garage after it closed for good

And it certainly was a mainstay in my life. The garage guys were there, year in and year out, when I came home from school, and later when I came home from college (all the way from Morningside Heights!). As an adult, I still saw the same faces from when I was a child. Morris, Junior, Willie and later, Jay, Pedro, Juvie (sp?), and still Willie. They were my security detail back when SoHo was dark and desolate, they saw me grow up and they’ve known my daughter since the day she was born.

I had a recurring dream (nightmare?) when I was a teenager.  I was being chased by a faceless someone.  As I turned the corner onto my block, I saw Willie standing in front of the Mercer Garage so I ran up to him and he said something like, “It’s okay.  You’re safe here.”  Since then, whenever I see the garage or Willie, who has worked there since 1983, I feel safe.

The famous PARKING sign. Where will it go? Perhaps it needs a home in the SoHo archive

In 2011, spoke with Jay, the owner of the garage, and found out that his family has a long history in SoHo and on Mercer Street, WAY longer than my family.

The building at 165 Mercer Street was originally a factory but was converted to a parking garage when automobiles began to be popular.  During prohibition, there was also some bootlegging going on in the building as well.

In the 60’s, Jay’s father, Calman, an auto mechanic, bought the building. Calman and his brother, Jay’s uncle Morris, who had worked in an embroidery workshop down the street since just after WWII in what is now the Donald Judd building, ran the garage, which used to sell Getty gasoline.  Calman would work the morning rush at the garage and then leave to work at an auto body shop on Bleecker and Lafayette (where Pinche Tacqueria is now) all day and then he would come back to the garage to work the evening rush. He would take Saturdays off, and then on Sundays, when the garage was closed, Jay would come in to the city from Brooklyn with his father and mother. His father would go to the shop to work on cars he didn’t get to during the week while his mother would clean and sweep at the garage.  Jay would go across the street to the former NYU playground (see my post on the playground here) to play pickup basketball games and then in the evening the whole family would go to Chinatown for dinner. That was their Sunday ritual.

Morris Diamond worked at his family’s embroidery factory at 101 Spring Street from after World War II until 1969 when the factory closed. He then worked with his brother, Calman Batt, at the garage at 165 Mercer Street until his death in 1987. Jay Batt, Morris’ nephew, ran the garage until it closed at the end of last year

I did not know Calman, but I have only fond memories of Morris, who passed away in 1991.  He always greeted me and my family cheerfully, and on spring and summer evenings in the 1970’s, I would sometimes sit with a friend on the bench outside his garage and practice the songs we learned in our chorus.  Morris would come out of his office applauding and give us each fifty cents for our “beautiful” singing.  Fifty cents could buy us a slice of pizza, a subway ride, or a boatload of candy, so, to us at least, it was a substantial chunk of change.

Back then, the garage’s clientele was mostly comprised of commuters coming in to SoHo to work at the factories and offices. The garage workers knew all of their customers, as they were mostly monthly parkers who would come in every weekday.  They were Monday morning quarterbacks who would talk sports and chat and there was a real camaraderie, a sense of community, at the garage.

The enormous car elevator. I always wanted to ride in it

By the early 1980’s, most of the factories closed and the clientele began changing.  There are still some monthly customers, but Jay says that there are more and more “transients” who remain anonymous.  Lunchers.  Shoppers.  Weekend partyers.  The garage is open late on Saturday nights to accommodate the dinner crowd, but they still close at 7:30 pm on weekdays, which gives them just enough time to get all the cars out and the trucks in.

This sink has seen it all

Business declined due to the recession. More and more people chose to just stay home.  But Jay said he would never sell, and he didn’t.  He knew just how valuable his enormous building was, but he liked running a business and he planned to pass it along, just as it was passed along to him. But things changed, as they always do.

The good news is, Jay will still be able to pass it along, as he did not sell the building. From what I have heard, after an extensive renovation and restoration, the building will house offices and retail on the ground floor. This will change the block considerably, but it will not be an anomaly. The building will feel right at home with the Mercer Hotel, Prada, Balenciaga, Zadig and Voltaire, Versani, Marni, Vera Wang, 45 RPM, and the currently-under-construction Tori Burch, Marc Jacobs, and a three story Dolce and Gabbana. As a matter of fact, in recent years it was the garage that was the anomaly on the block.

But the question still remains, who will protect me now? I’d better start getting cozy with the doormen at the Mercer Hotel…

Pedro in the garage's office