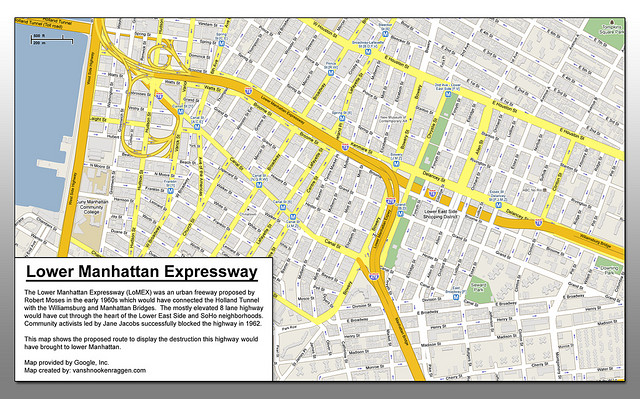 The idea for the Lower Manhattan Expressway, or LOMEX as it was known, which was to run the length of Broome Street, was first put forth in the 1930's and gained support in the 1950's and 1960's and would have razed most of what is now SoHo and Little Italy. If Robert Moses and his cohorts had had their way, SoHo would never have existed, and the whole area of lower Manhattan between the Holland Tunnel and the Williamsburg and Manhattan Bridges would most certainly have shared the same fate as the South Bronx after the Cross Bronx Expressway (another Moses project) was built. But thanks to community activists such as Jane Jacobs, Julie Finch, and Ernesto Martinez, opposition to the proposed highway connecting New Jersey and Brooklyn (via some of the most historically significant areas of New York City) killed the project, and the highway was never built.

Like David and Goliath, Jane Jacobs and Robert Moses are often held in opposition to each other, with Jacobs representing all that is right about urban planning Moses representing all that is wrong.  I readily admit that cities need public works and those who administrate them as much as they need to be checked by concerned citizens who are ready and willing to defend their neighborhoods and quality of life, but I am forever thankful that LOMEX was never built.  If it had been, SoHo would not have existed.  But it was, ironically, largely due to the  LOMEX project that SoHo was able to develop in the first place.  Beginning in 1960, support for LOMEX gained momentum in the halls of municipal government.  As a result, because the fate of the buildings around Broome Street was so uncertain, only artists were desperate (or crazy) enough to sign on to leases.  Landlords were unwilling to invest capital in the buildings, so the tenants moved into very inexpensive but raw spaces and fixed them up themselves.  Throughout the 1960's, plans for LOMEX moved forward against growing protest from the community as well as City Hall until finally, in 1969, the project was abandoned, never to surface again.  During this time, SoHo flourished, attracting more and more artists desperate for affordable studio space and optimistic enough to take a gamble, and now, instead of urban blight we have adaptive reuse, historic preservation, and SoHo.  And who do we have to thank for this course of history, David or Goliath?

Check out this video about Robert Moses, especially “The Meat Ax” (5:10-7:30),
which is about his fight with Jane Jacobs over LOMEX.