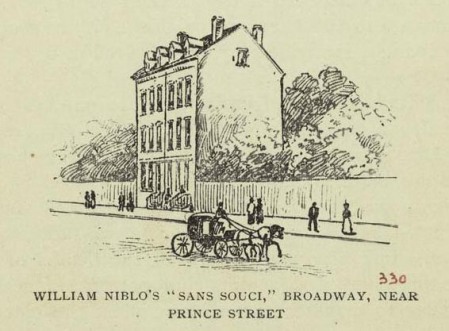 The Lullaby of Broadway

The corner of Broadway and Prince Street today

Although this blog focuses on SoHo in the late-1960's through the early-1980's, I thought it would be interesting, from time to time, to look at what was happening in the neighborhood before SoHo was called SoHo.  Our neighborhood's long history and many incarnations, from Native American territory to farmland to suburb to commercial center to red light district to industrial hub to art capital and finally to retail mecca, will remind us that, although some of us may miss the days before SoHo was a center for commerce, fashion, and gastronomy, it also wasn't always a quiet, dirty, residential/industrial community filled with quirky creative-types living illegally in palatial, underheated dwellings.  As a matter of fact, far from it.

I was recently perusing the Bowery Boys blog and came across a post on Niblo's Garden.  From the 1820's until 1895, when it was demolished to make way for an office building, Niblo's Garden was one of New York City's premier "pleasure gardens," venues where wealthy New Yorkers could find diversion and amusement, both indoors and out, before the advent of public parks.  It was located at the corner of Broadway and Prince Street and extended all the way to Crosby Street to the east and Houston Street to the north.  In addition to gardens, an open-air saloon, and an exhibition hall, in its heyday Niblo's housed a 3,200-seat theater at which the first Broadway musical was performed and also at which P.T. Barnum made his show business debut.

On this same stretch of Broadway, one could also find the ultra-opulent St. Nicholas Hotel at Broadway and Spring Street.  The only remaining part of the building, which spanned the entire block to Broome Street, is now the site of The Puma Store and Lady Footlocker.

And finally, it bears mentioning that Tiffany & Co. was once located at 550 Broadway between Prince and Spring Streets where Banana Republic now resides, on the block between Niblo's Garden and the St. Nicholas.  The Atlas clock in the image below is the clock that now adorns the facade of the Tiffany & Co. store on Fifth Avenue at 57th Street.

So although some of us lament the fact that SoHo has lost it's edge and has become a playground for the rich and beautiful, we are also forced to admit that, what goes around, comes around.

(See more images and listen to a great podcast about Niblo's Garden from The Bowery Boys.)

The St. Nicholas Hotel on Broadway between Spring and Broome Streets, built in 1854 (image NYPL)

The remaining portion of the St. Nicholas Hotel, The Puma Store and Lady Foot Locker at 521 and 523 Broadway today.