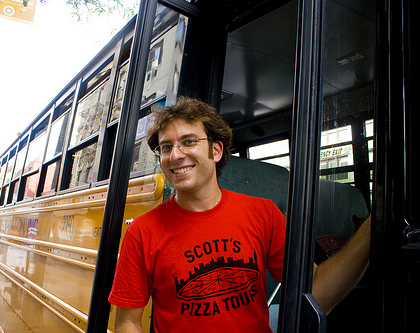 Lombardi's on Spring Street in 1905 (photo: via The Bowery Boys)

The other day, I met this great guy named Scott Wiener, who knows more about pizza than anyone else on the planet.  He researches the history of pizza. He gives pizza tours.  He blogs about pizza.  And, of course, he eats pizza.  As he explained to me  the evolution of pizza in New York, I realized that I grew up in the epicenter of pizzadom.  I never really thought about it before.  I really took it for granted.  Lombardi's, Ray's, John's, Arturo's, Joe's, Ben's.

When I was about eight years old, my mom would give me a dollar and I would go to the Carmine Street pool during the summer with my friend, Julia.  Ten cents to get in to the pool.  Fifteen cents for candy.  Twenty-five cents for a drink.  And fifty cents for a slice at Golden Pizza (where Joe's is now).  And if we were lucky, someone would put "Dancing Queen" on the jukebox.  A perfect day.

My friend, Anna, who lived on the Bowery, and I would get "white" slices from Ray's on Prince.  They were way ahead of the curve with the sauceless ricotta slices.  And who knew that they were actually the ORIGINAL original Ray's.

Ben's on Spring Street, of Men in Black II fame, was a post-Thompson Street pool treat.  And still is.  In fact, my daughter now EXPECTS pizza whenever we go to the playground.  She is only three years old and can eat an entire slice, easy.  That's my girl!

The older, more restaurant-y no-slices establishments came later in my life, once I was able to dine out on my own.  Lombardi's was closed for about a decade during my youth , but John's and Arturo's were the obvious destinations for a relatively cheap and filling (and yummy) meal.

Did you know that most true New York pizzas can be traced to Lombardi's?  In 1897, Gennaro Lombardi started working at a tiny grocery store at 53 Spring Street that he eventually owned.  A demand for cheap, ready-made, easily transportable food led hm to begin selling "tomato pie" wrapped in paper and tied with a string.  You could buy it by the pie or you could buy it by the inch (slices).  In 1905, Lombardi turned the store into a pizzeria.  Employees of Lombardi's went on to open Totonno's (1924),  John's (1929), Patsy's (1933), and Grimaldi's.  Who knew we were living so close to a historical icon?  Thanks to Scott, I will never take pizza for granted again!

To listen to an interesting podcast about the history of New York Pizza, "Kings of New York Pizza: Lombardi, Totonno, Patsy, Ray?" click HERE. Or better yet, experience history firsthand by taking a tour with Scott.