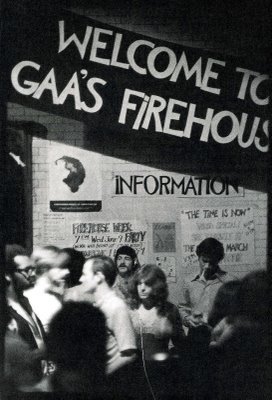 In June 2016, President Obama designated the Stonewall Inn and the surrounding area a national monument, the country's first national monument to lesbian, gay, bisexual and transgender (LGBT) rights. Preservationists are now fighting to have other sites significant in the early gay rights movement designated as landmarks, including one here in SoHo.

The firehouse building that was once the headquarters of Engine Company 13 at 99 Wooster Street was also the headquarters of the Gay Activists Alliance (GAA), whose symbol was the Greek letter lambda, from 1971-74, the period when the group was most active. The building is now home to a Victorinox Swiss Army store.

The GAA was first and foremost a political activist organization that sought to advance LGBT civil and social rights. The GAA Firehouse, however, was also a gathering place, a community center that hosted many social events, most notably its hugely popular Saturday night dance parties.

As Maggie Keenan-Bolger writes in “Discovering the LGBT Library: The Firehouse” on the New York Public Library blog:

These dances were one of very few places LGBT folks could go to interact socially and politically.  Many of the gay bars at that time were owned by Mafia members who had complicated relationships with the police and who would often blackmail wealthy patrons, threatening to out them to their employers and families.  The Firehouse offered events for LGBT people organized and run by LGBT people.  Aside from being a top fundraiser for the GAA as well as an ideal outreach and recruitment tool, the dances offered a safe space for LGBT people at the time to have some fun without fear of persecution.

The GAA also published the Gay Activist newspaper and hosted “Firehouse Flicks,” a film series curated by Vito Russo, who would later write The Celluloid Closet, a hugely popular and influential book that examines images of homosexuality and gender variance in Hollywood films from the 1920s to 1980.

Many of the GAA’s advocacy activities were planned at the Firehouse, including sit-ins and picket lines. Its most famous tactic was the "zap," raucous public demonstrations designed to embarrass a public figure or celebrity while calling attention to issues of LGBT rights.

According to the entry for the GAA on Wikipedia:

Some of their more visible actions included protests against an anti-gay episode on the popular TV series Marcus Welby, M.D., a zap of Mayor John Lindsay at the Metropolitan Museum of Art and later at Radio City Music Hall, a zap against Gov. Nelson Rockefeller (the "Rockefeller 5"), a zap at the Marriage License Bureau demanding marriage rights for gays, a zap against Fidelifacts, which provided anti-gay information to employers, a zap at the NYC Taxi Commission (which required gay cab drivers to get an OK from a psychiatrist before being employed), and a zap at the New York Daily News, which printed a scurrilous editorial attacking "queers, lezzies, pansies, call them what you will."

On October 15, 1974, a fire set by arsonists in the wee hours of the morning on the upper floors if the firehouse destroyed the GAA’s headquarters. About 50% of the building was damaged and the GAA moved to another location.

The firehouse was designated part of the SoHo-Cast Iron Historic District by the Landmarks Preservation Commission (LPC) on August 14, 1973, while the GAA occupied the building.  However, the LPC designation report does not mention its connection to LGBT history and is thus, according to The Greenwich Village Society for Historic Preservation (GVSHP) newsletter, “vulnerable to future compromise or loss…. This can be easily changed by amending the designation reports for these districts to include information about the LGBT history of these sites, or by considering the sites for additional individual landmark designation.”

Other sites that GVSHP would like to see designated as an individual landmark include the Lesbian, Gay, Bisexual and Transgender Community Center on 208 West 13th Street and Julius’ Bar (159 West 10th Street), the oldest gay bar in New York and the site in 1966 of the first civil disobedience action for lesbian and gay rights, which led to the lifting of New York State’s ban on gay bars.

To be included in this list of potential landmarks speaks to the vital importance of the Firehouse to the origins of the gay rights movement of the 1970s. It is not a surprise that it was located in SoHo, probably one of the most inclusive communities in New York City at that time.