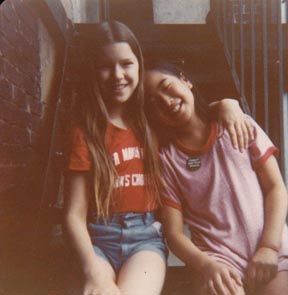 From "On the Bowery" National Geographic, September 1981 (photo: flickr/nycdreamin')

Anna, my best friend growing up, lived on Bowery between Houston and Prince, in a former flophouse.  If you told us back then that that very block would be a hub of stylish restaurant and nightclub culture in New York one day, we would have said that you were smoking angel dust (we didn't have crack yet).  The Bowery and the streets on either side of it were not the prettiest you've ever seen.  That didn't stop me, however, from walking to Anna's house on a daily basis, though I do not know what my mother was thinking letting me go.  After dark, I would take the longer but "nicer" way home, via Prince Street and the four bodegas between her house and mine.  Houston Street was lined with "Bowery bums," mostly men but some women, lying around on the sidewalk, staring off into space.  I doubt they were a real threat to my safety, but still, I was only eight or nine years old.

Anna had an enormous loft with a vast roof (tar beach) where we would frolic and play.  When I slept over, if the weather was nice, we would breakfast on the "balcony" (a.k.a. fire escape) with her three cats.  A few times when it was just too hot to breathe indoors, we slept on the roof, only to be awoken at dawn by the rising sun and humidity.  Anna's mother, Ingrid, was a clothing designer who had recently emigrated from (West) Germany.  Their house was my second home, as my parents were often working at all hours, leaving me to fend for myself.

I remember one winter evening a truck was parked on the corner of Bowery and Houston distributing meals to the hungry.  Ingrid brought us down to have some food and mingle with the other children who were there, a know-your-neighbors kind of thing.  We ended up having a snowball fight, and a pretty good meal.

I also remember the stench as I passed the poultry slaughterhouse near the corner of Prince Street during the summer months.  Thanks to that place, I can hold my breath longer than your average bear.

And finally, I remember that if you bought cheese at one of the local bodegas, it would taste faintly of the ammonia and bleach fumes that lingered in the air after they mopped the floors.

To many, the name "Bowery" immediately conjures up images of drunkards, flophouses, and people down on their luck, or at least that was its connotation before the likes of Keith McNally, Daniel Boulud, and Whole Foods moved in and made it hip.  Though some may not consider it technically IN SoHo, the Bowery in the 1970's was very much OF SoHo, a place where artists and families lived and worked, alongside the wholesale restaurant supply trade and the down-and-out on this diverse and culturally-rich mixed-use boulevard.

Ingrid talks about living on the Bowery

Trailer for the upcoming Lower East Side History Project (http://leshp.org)film, The Bowery.