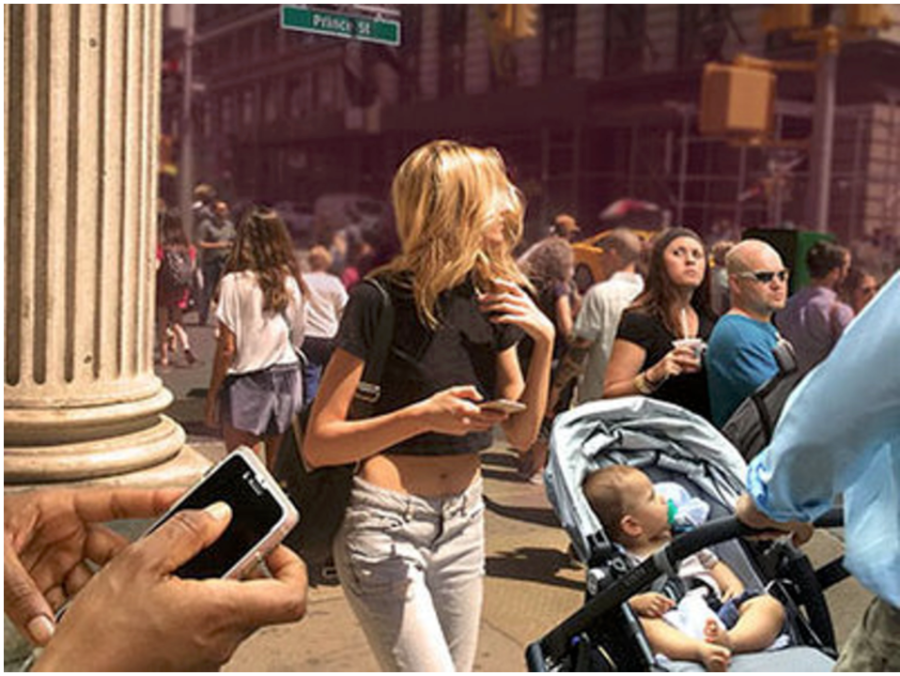 Today's guest post is by my (former) neighbor Michael Gentile, who recently moved out of SoHo after being in, out, and around the neighborhood for the last 30 years. He expresses the sentiments of a growing number of long-time residents who lament the fact that SoHo has transformed to a point of being unrecognizable to them. I wrote about my own coming to terms with this fact a while back in my post "Where is New York?"  Here, Gentile weaves the neighborhood's long history into his observations of present day in this swan song to the neighborhood he once called home.

Soho’s Not So Grand

A NYC neighborhood in flux

Soho’s current sugar high is a real buzzkill. This neighborhood, New York City’s birthplace of hyper-gentrification, originally called “Hell’s Hundred Acres,” houses the most breathtaking, fully restored 19th-century cast-iron building facades in the world. Fortunately, the successful efforts of architectural historic preservation and community boards have saved many buildings. However, Soho’s history has become diminished and lost with the results of the neighborhood’s ever-changing crossover, which gives comfort to the crowds seeking out sameness, but at a cost.

The enthusiastic transition to megastore retail, restaurants, hotels, and condominiums has claimed victims. Former loft residents, factory workers, artists, and political radicals vanished, and were not included in the neighborhood’s future.

Is creativity still at work in Soho? Sort of. On the steps of Prada, lifestyle and image are crafted. Supreme hoodie kids on Adderall snap iPhone selfies while sipping $17 hemp smoothies. At the Mercer Hotel across the street, anxious Twitter users wait, hoping to catch a glimpse of a fleeing Kardashian. On the sidewalks, fashion wannabe Snapchatters hurriedly clip-clop to double-parked, glossy-black, Suburban Uber-Lyfts. Flag-raised tour guide groups shuffle along, overflowing into the streets. Soho’s a playground for the wealthy, who look poor and shop rich.

Dystopian nightmare or growing pains? Depends on who’s talking. Soho’s present state could be perceived as a negative development in New York culture.

Business leaders, city planners, and politicians always get worked up over the idea of development. Real estate developers’ rote answers offer little comfort to the continuing gentrification problems, high rents, and empty storefronts. It’s disingenuous, hand-feeding the public a generic shopping experience structured at a marketing meeting by executives wanting to up their game. What’s the point? Money.

The daily crime scares some away. The setting is perfect. Picture any typical over-priced, high-end boutique. Enter a motley European couple—exit a pair of pricey Manolo Blahnik heels. The thieves blend into a sea of humanity.

When a grand larceny occurs, sometimes an ad-hoc protocol follows: the store empties, the staff blocks the sidewalk, the shop is put on lockdown, bummed-out employees light up and smoke. Everyone looks down, tapping away on their devices, calling the corporate office or making dinner reservations.

The NYPD set up a defensive move during peak periods: street patrols and a mobile processing “jail” station at Prince and Greene Sts. Supply and demand—where there are crowds, there are highly-organized criminals.

But crime is nothing new to Soho. During the 1860s, Mercer St. was part of the City’s “ten-cent houses” and the first red-light district, including Mrs. Van Ness’ number 149 brothel, filled with discreet prostitutes. On the same block, the recently closed, soon-to-be condo, the Mercer-Houston Street Garage, originally operated as a horse boarding stables. Then, in the 1930s as a parking garage, it housed Joseph “Black Lefty” Lapadura’s lively bootlegging operation until the FBI discovered it.

However, Soho’s most infamous moment might be the day young Elma Sands’ dead body was found underground, floating at the bottom of a Lispenard Meadow well. The well is still there, now at 129 Spring St.

It was the cold night of December 22, 1799, when Miss Elma planned on eloping with Levi Weeks. Mr. Weeks, a carpenter, was later charged and tried for her murder in 1800. His lawyers were Alexander Hamilton and Aaron Burr. It was the first recorded transcript murder trial in the United States, and the jury acquitted Weeks in only minutes. Some say the spirit of Elma Sands still roams the streets of Soho at night.

And then there are the many non-rent-paying “tenants” who’ve endured these changes and flourished: rats, estimated at 100 million citywide. One thing’s for sure, the rodents are enjoying themselves every night, running around and jumping on tied-up cardboard boxes.

Meanwhile, a sleepy Soho pauses and moans a collective sigh during the few precious moments before dawn. A walk at sunrise might turn your head for the wrong reason. Curled up in Tiffany & Co.’s elegant Greene St. doorway, a homeless person snores away. Garbage trucks barrel down the soot-stained Belgian block streets. Seafood, dairy, florist, and bakery vendors make deliveries. A dog walker silently passes a jogger in the brightening gray light. It’s all a reminder that there are no dead ends in Soho, just detours.

This story first appeared on