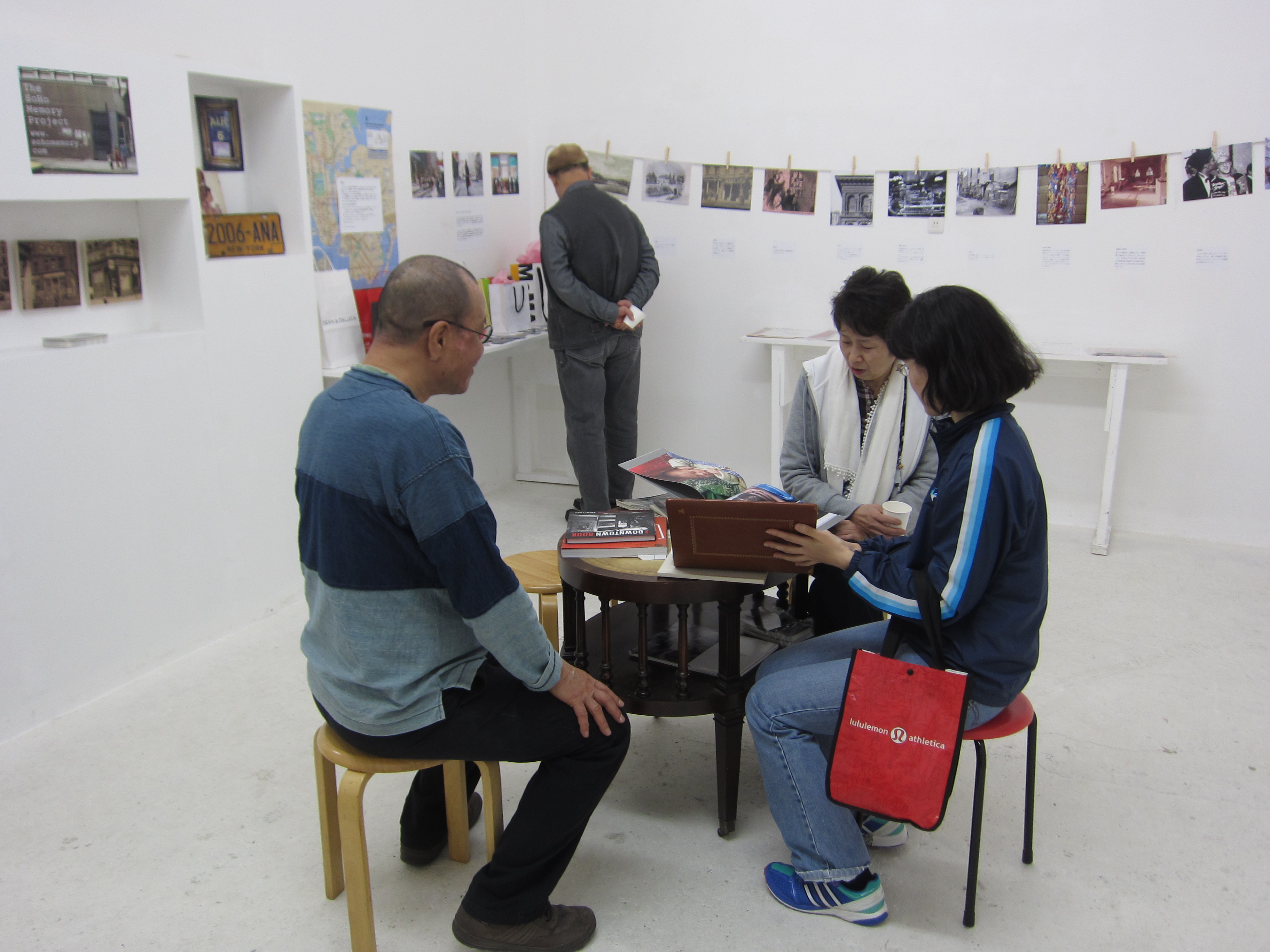 At the opening reception for the SoHo Memory Project exhibition

This is week three of my SoHo exhibition.  I think it has been rather successful thus far.  Not in the sense that it has drawn large crowds from far and wide, but it has shed a (dappled) light on the mysterious ways of my ex-expat parents in the eyes of locals.  My parents spent more than half of their lives in New York.  How could they not have brought it back to Okazaki with them?

First of all, everyone now sees that what they thought was my parents' unusual and excessively large live/work space, is de rigeur in SoHo.  Japanese homes are small, cramped abodes with small cramped rooms that at first glance appear more spacious than they really are because everything, from the sofa to the plates to the people themselves are a few degrees smaller than in the US, thus everything is to scale, as if the whole environment were thrown in a dryer set on high.  But then you realize that the overflowing plate of food offered at dinnertime is in fact a Lilliputian feast and that you are starving as soon as you’ve finished your mini-meal.  Yes, even the pieces of sushi are smaller here.

In contrast, my parents have recently super-sized their living quarters.  While they were camping out in the back of the Blue Box Gallery, they decided to build a house on the lot next door that was being used for parking.  Again, instead of building a house like all the others in the neighborhood, my father designed a three-story “loft building” where he could have an entire floor as a studio and then a spacious living space above.  The ground floor, still vacant, is a commercial space that can be used for art or dance classes or as an exhibition space, TBD.  The building has exposed cement walls, wood floors, and high ceilings, a la SoHo 1975, but also includes all of the modern conveniences of Japan 2013, such as a bathtub with a digital control panel where you can set and maintain the temperature of the bath, shower, and air, all separately, and a pleasing tune plays throughout the apartment as a soothing woman’s voice announces that your bath is ready and is at your desired settings.

The control panel of my parents' bathtub

Then there’s the more intangible SoHo ethos that emanates from The Blue Box.  Japan is not a country that generally celebrates difference.  People seem to work hard to blend in, to toe the party line in terms of behavior, dress, even how they pass their leisure time.  This is kind of a bummer for any arty eccentric types.  They must remain closeted or else risk ridicule.  Not anymore!  The Blue Box is a haven for the square pegs of Okazaki.  They come to hang out and chat and let it all hang out.  My father has a motley posse of “misfits,” who in New York would just blend in, but then, who doesn’t blend in in New York, save for a group of Japanese tourists?

I asked visitors to the gallery to share their impressions of the exhibition.  People mostly said what you would expect, “I never knew that SoHo had such a rich history,” and “I would like to visit SoHo now that I know something about it.”  One visitor wrote me a note reflecting on my childhood that said, "To bring a well-balanced, well-rounded child into the world is quite difficult.  It takes a broad-minded community, home, and family working together to achieve this.  You are very lucky to have had such a life!"  Lucky, indeed.  I will keep this in mind while raising my daughter, also a child of SoHo, with the hope that when people see her exhibition about the SoHo of her childhood, they will know that she, too, was a lucky kid.