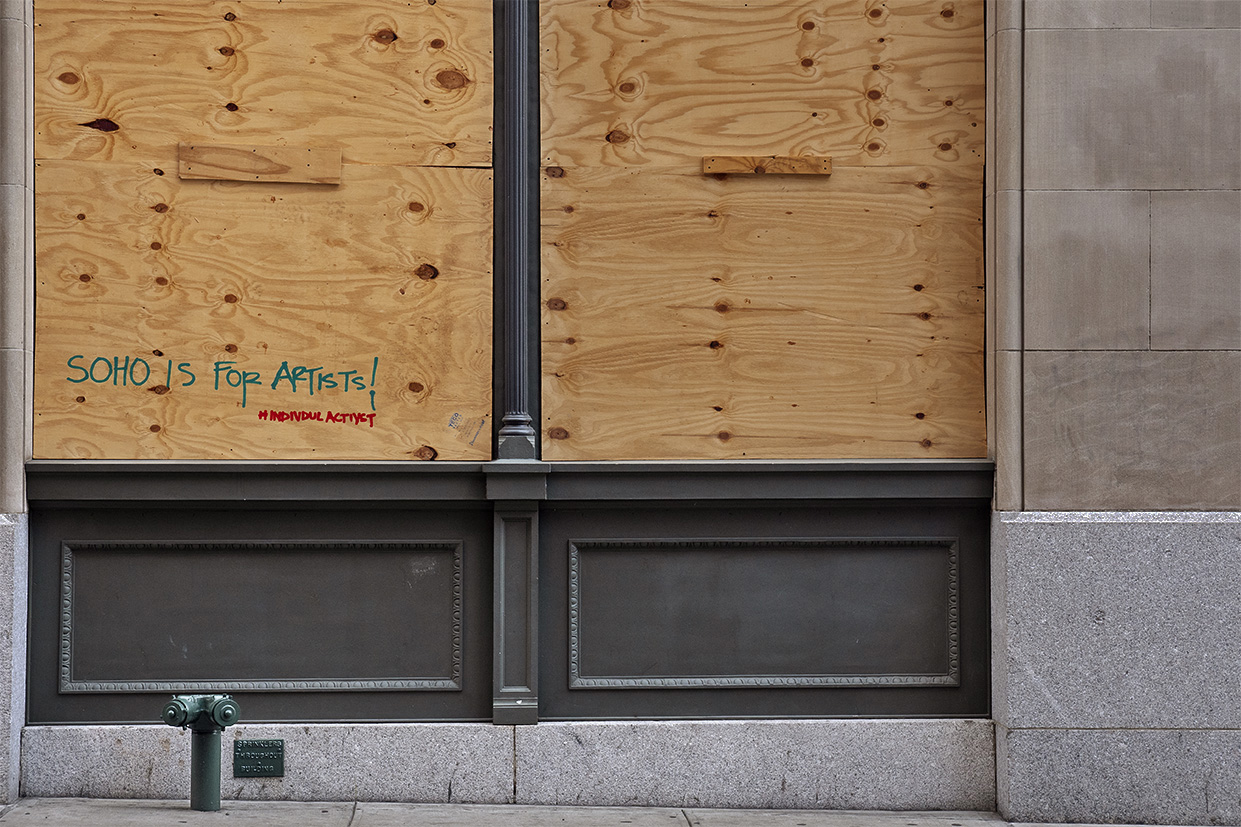 SoHo, like the rest of New York City, was a ghost town after Governor Mario Cuomo issued a “shelter in place” order on March 20, 2020. All residents were asked to stay at home, except to go shopping for groceries or for health emergencies, to help stop the spread of COVID-19. This meant that all but essential businesses closed as New York became an epicenter of the novel coronavirus.

The above photo of Prince Street looking east from Greene Street could almost have been taken 50 years ago, which was probably the last time SoHo was this quiet and deserted.

On May 25, 2020, George Floyd, an African-American man, was killed by a white police officer in Minneapolis, MN. A video of the incident depicting the officer kneeling on Floyd's neck for an extended period, attracted widespread outrage leading to local, national, and international protests and demonstrations (source)

Tens of thousands of demonstrators marched daily through New York City streets. Many of the demonstrations went up and down Broadway through SoHo. There was marked police presence in the area, especially after demonstrations gave way to rioting and the looting of many SoHo luxury boutiques the nights of May 30 and June 1, 2020.

By June 2, after two nights of looting, most storefronts in SoHo were boarded up. SoHo resembled the ghost town it once was before there were any stores and restaurants in the neighborhood.

It did not take long for SoHo artists to see the plywood lining the streets as canvases. SoHo became an open-air gallery of murals, many political, many explicitly condemning anti-black racism.

This public art movement grew out of the efforts of individual as well as groups, such as Art2heart and SoHo Social Impact, to beautify the streets of SoHo and to send messages of love and solidarity with ongoing protests.

As of July 6, 2020, New York City entered Phase 3 of reopening. Street life is making a comeback in SoHo, with outdoor dining, window shopping, and small gatherings of people. Will we enter phase 4 on July 20? Maybe. We will in all likelihood need to reverse course and go back inside for a time before a vaccine is available. But for now, SoHo is showing signs of life. Who knows what is to come? It is the uncertainty that is so difficult to accept.

With the community’s generous participation, I have collected over 1,200 photos of what transpired inside and outside the cast iron buildings of SoHo over the past four months and I will continue to collect until we are on the other side of this. I have been able to piece together the neighborhood’s trials and tribulations as well as its silver linings. These images will be kept and preserved for generations to come.

As @villagegirl said back in March, "Something BIG is happening, and everyone feels it and is trying to work it out somehow- whether through photography or writing or meditation or work or watching Cuomo’s news conferences and reading the paper." Sweet are the uses of adversity, most of the time.