SoHo People
Howard Street Storefront: Cheers to a long run at the wonderful storefront at 27 Howard Street! As exciting as the store move to Brooklyn is, we’ll miss the neighborly “bench night” congregations with other retailers after store hours, and the creative community of design, jewelry and fashion showrooms that once were, and those which still remain. 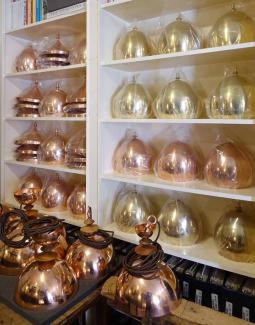 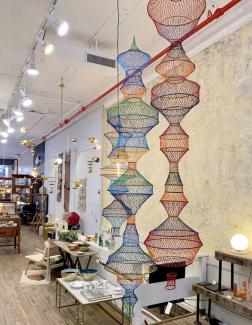 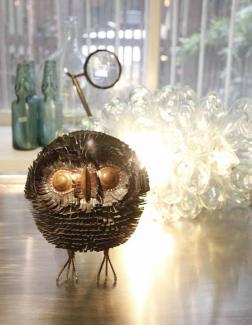 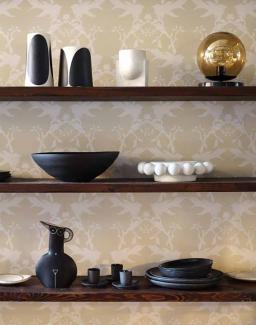 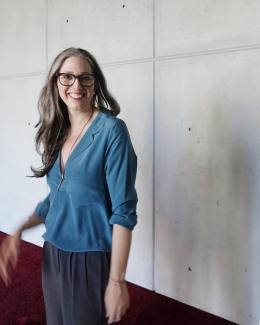 SoHo’s retail landscape has changed drastically over the past few years with the popularity of online shopping and rents so high that even many chain stores cannot survive. It is thus a small miracle in many ways that Michele Varian’s elegant and eclectic design shop was able to hold on for as long as it did in SoHo, but it’s also a testament to Michele’s outsized talent and business acumen. Throughout her tenure here, she changed with the times while staying true to her creative goals.

It is also interesting to note that it was a national tragedy (9/11), that propelled her to open her store, and a natural disaster (Hurricane Sandy) that triggered the store’s evolution and eventual exit from Manhattan.

Where was the original Michele Varian located and when did you open the store?

At first, I was doing everything out of my loft on Grand St. I was hand-stitching everything, and selling to major luxury retailers like Barneys and Neiman Marcus. After 9/11, all the trade shows were cancelled, which completely compromised my sales to other retailers. I saw a For Rent sign in the window of what had been a cycle couriers’ office, a small independent business that had a turn-of-the-century bicycle in the window. I had always been charmed by it. (They actually became my courier service, in the most neighborly way!) That became my very first store location and was on the block between my loft and Brad’s, my now-husband’s block. That first store was at 31 Crosby St.

The landlord of my original location also owned a storefront two doors down, at 33 Crosby St., which was larger. That tenant was having trouble paying their rent, and the landlord actually forced me to swap to the bigger space, believe it or not! He wanted to maintain both tenants, and so the two of our businesses traded sites.

Then I moved from that space because the landlord essentially doubled my rent on the day I was supposed to renew my lease. I decided to move to 27 Howard St, which was much larger. Think of it what you will in terms of my experience as a bellwether of what has happened to SoHo, but that second Crosby St location is now a Bonobos, which was bought by Walmart…

I lived around the corner in my loft on Grand St, and then moved into the space my husband lived in – we’ve been there together ever since. We’re able to stay there because it’s an artist-zoned, rent stabilized loft and Brad (who’s the lead singer of the Crash Test Dummies) is a musician and composer. Otherwise, there is no way that we could have stayed in SoHo.

My customer base has absolutely changed over the years. Originally, my customers were many of my residential neighbors who were, like me, mostly involved in creative professions. They had very eclectic tastes, and because the store was both accessible and aspirational, we were really part of the neighborhood. With Hurricane Sandy, a big change happened. Many of the neighbors who had children in school in Brooklyn couldn't get them there because transportation was shut down for 5 weeks, so a lot of families leased, sub-leased, or couch surfed with Brooklyn friends – then many of them decided to move there afterward. They realized the benefits of what they could afford there, versus what they were getting in SoHo.

My newer SoHo neighbors and customers are more empty nesters or involved in the financial industries. They’re not necessarily creative industry people, and they’re not here all the time because they have homes elsewhere, too. Whereas previously, people really lived here, and supported the neighborhood businesses.

Did your store change with the changing neighborhood? If yes, how?

As the residents began to change, I began focusing more on developing product for the interior design trade, since many of the new residents hired interior designers, versus shopping themselves. It’s part of the necessary nimbleness and flexibility to stay relevant.

I’ve told this one a few times, but it’s classic. David Bowie, who was a neighbor and a regular visitor, came in once and, while shopping, was singing along to the music I was playing (swoon!). Then he stopped suddenly, looking like a realization had struck him, and said out loud, ‘Oh, this is me!’ He laughed, and was very sweet and charming about it.

Another cool moment was in my previous space on Crosby St, when a rough-around-the-edges man came into the shop. He was gruff and a bit disheveled, and I could see he was making my employee a bit anxious. I thought, I don’t think that man’s homeless, I think he’s a musician! (I had spotted his Helmut Lang pants.) So I approached him and asked if he was recording up the street, a spot I knew about because my husband Brad records there. He was quite impressed with that. It turns out it was Andrew Loog Oldham, who was the Rolling Stones’s first manager! He got chatty and regaled me with many stories from their past.

Why are you moving the store? How do you feel about moving it?

It’s bittersweet. I still live in SoHo, and it makes me sad that it doesn’t make sense for me to maintain a business in my own neighborhood anymore. But the cost of having a business in Brooklyn will be a fraction of what I’m paying now. I’m very much looking forward to the creative prospects, and to being in a space that allows me to put my resources toward growth in terms of new product development and design collaborations. And of course, I’m also looking forward to the new neighbors in retail and in design, so many of whom I already know. On Crosby St., many of the businesses that were there when I opened were independent and owner-operated, which is not the case any longer. In the early days, we used to meet regularly for "bench nights" in front of my shop after work. I'm looking forward to being in a neighborhood of independently owned and run small businesses again!

One last thing I’m excited about, which may not sound as enticing but means a lot to me, is being closer to my fabricators.

What’s next for Michele Varian, the store and the person?

I’ve already begun great collaborations with other designers (like Lio and Linn, and Two Tree Studios). And with Guesst, the co-retailing platform I co-founded last year, I’ve curated a retail shop in DC. They’re so hungry for that there, versus in NYC there’s an oversaturation of retail. So that’s been wonderful. In the new year, I’m all in all looking forward to expending my energies in more creative ways.

Is there anything else you would like to add?

I’m hoping 2020 will be the first time in 20 years I’ll be able to take a proper vacation!

Michele Varian is a designer, micro-manufacturer and entrepreneur; she is also a buyer, curator, retailer and shop owner, a tenants’ rights advocate, a small business and community activist, a proudly native Detroiter, and a passionately longtime New Yorker. For more information about Michele, click here.