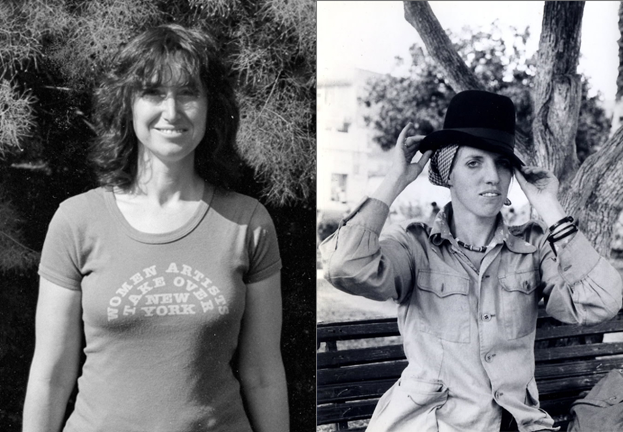 I was combing through a bunch of oral history files in the SoHo Memory Project digital archives recently and I came across a gem! Back in 2015, StoryCorps invited me to record conversations about old SoHo at their StoryBooth in Foley Square. Among the pairs of people I brought with me was longtime friends artist Joyce Kozloff and Elizabeth Weatherford, founder of the Film and Video Center at the Smithsonian National Museum of the American Indian.

This forty-minute interview conducted in the StoryCorps signature format, a conversation between two people who know each other well, is a treasure trove of stories about two young women making their way to SoHo in the early 1970s and what happened during the forty-plus years that followed.

This conversation in its entirety is well worth a listen. It flows so nicely and Elizabeth and Joyce speak so eloquently and concisely about SoHo's influence on artwork, founding Heresies magazine, the gradual process of SoHo's gentrification, and much, much more!

The following is a selection of excerpts and quotes from the conversation, but, again, the entire piece is such an enjoyable listen!

How Joyce found her loft in SoHo:

The building that I live in…had been co-oped in 1970, so we were not the pioneers. The group of people who put it together have always considered us latecomers…So we did not consider ourselves pioneers, we already knew a lot of people living in the neighborhood. But no one hardly ever leaves our building. Mostly it’s all the same people after all this time. Which I refer to as an aging dysfunctional family.

My building was a doll factory and even when we moved in four years later, I used to find these little plastic arms and legs behind the radiators and little tufts of fake hair. The arms and legs were either pink or brown.

But the building across from us on Wooster Street was still a sweatshop, so that if you looked across into the windows you would see hundreds of women at sewing machines and at five o’clock they would all come out of the buildings and go to the subway and not come back until the next morning.

So when we moved in, the transition was not complete, it was in process.

If I ran out for a quart of milk in the morning and I ran into someone, I would know them. Whereas now, I walk into the street and there are thousands of people. I feel like I’m going to be stampeded on a Saturday afternoon and I don’t know anyone. So it really was a small community and we were all familiar with each other.

I remember moving into the loft, and I have a beautiful large studio and I found myself working in a corner of it and I think I realized at a certain point that I had created an area the size of my studio on the upper west side for my comfort level and that’s where I worked. And I had to psychologically expand with the physical expanse of the space, which I eventually did. And I do big work sometimes and the space has facilitated that, there’s no question, and I think it’s done that for so many artists. And I really feel regretful that those kinds of spaces aren’t available for subsequent generations of artists in New York.

There were women’s galleries and women’s shows, but there was no publication that was generated by women artists. There were publications about women’s art that were largely monographic, but not thematic, and we wanted a magazine that would talk about the issues that we were passionate about.

It was a quarterly, but it never came out four times a year.

The gentrification of SoHo was incremental:

The gentrification of neighborhoods process is faster and faster, it’s speeded up, I mean we had a certain amount of time to live this quiet anonymous life in our community before it started to change whereas in other areas as soon as the artists move in within a few years, it’s completely transformed.

Artists can’t afford to buy these lofts, this valuable property we’re sitting on. If they could afford it they might not want to move to SoHo anyway. ...Someone in our building did recently sell a loft to someone who is not an artist and there was a bitter fight about it but he had it on the market for a long time and there just wasn’t anyone he could sell it to.

There once was art everywhere in SoHo:

When people would visit me who weren’t artists, who were outsiders, who were civilian, like my family, and they’d see something strange in the street, they’d say, "What is that such-and-such I saw up at your corner?" and I would always say. "If you don’t know what it is, it’s art!"

There were all kinds of art manifestations everywhere in the neighborhood.

My art became more political in this century, much more political than it was before. I’m not sure why. The early work had a feminist content always, but I started making work about war around the turn of this century. I became very very obsessed with the idea of aerial war and the bombardment of civilian populations and I tried to find metaphors for that in my own visual language and I’m still struggling with those kinds of issues. I think what I did was that I closed out the immediate world of commerce around me and the neighborhood and I started thinking about the larger world. It became more of an obsession and a need to try and find a forum to talk about it. I don’t know if it has to do with the gentrification of SoHo, but the work I have been doing has less and less local content and maybe there is a parallel.