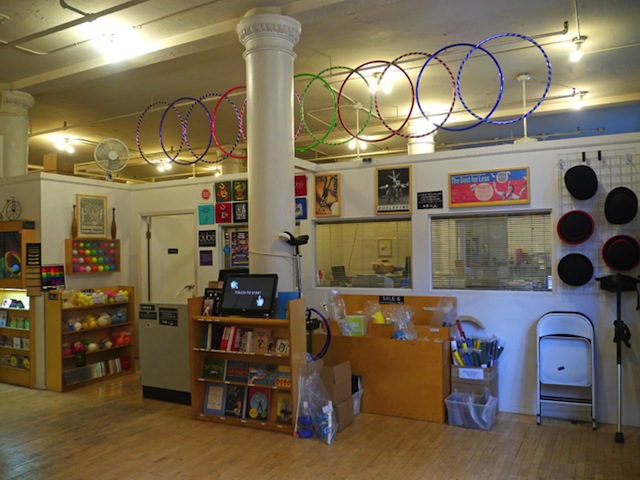 Dubé Juggling is moving.  The problem is, they don’t know where, yet.

Brian Dubé opened Dubé Juggling, a store, showroom, online outlet, warehouse, and manufacturer of all things juggling, in 1975 after dropping out of NYU.  His store on Broadway just south of Spring is the go-to place for the juggling world, including the likes of Cirque du Soleil, Penn and Teller, David Blaine, Ringling Brothers Circus, The Big Apple Circus, Philippe Petit, among many, many others.

In a December 20, 2012 New York Times article, Dubé is quoted as saying, “Not to toot our own horn, but we’ve got a community that’s fairly geeky, fairly technical, definitely artsy…But anyone can juggle balls.”  The article goes on to explain:

And balls line the laboratory-white walls of the small showroom: contact balls for body rolling, bounce balls for tricks, Russian balls for head balancing, illuminated balls for nightclub visibility and exerballs for bodybuilding. Clubs, whips and knives each have a section. Bowlers and derbies hang from a hat tree near the unicycle. Hula hoops are tucked inside Troo Hoops Alley.

Dubé has been in his current location, a third floor loft at 520 Broadway, since 1991 when the building housed mostly sweatshops, but he is being forced to move at the end of the year to make way for additional storage space for the new Michael Kors flagship store on the ground floor.  He has been offered a different floor in the same building, but at a 50% rent hike, which he cannot afford.  If he moves to the outer boroughs, like many small businesses that have been forced out of SoHo due to escalating rents, he will be harder to reach, in person at least, though his online business will continue as usual.

Some of the fabulous equipment you can find at Dubé

From the Dubé blog:

After 23 years at our location at 520 Broadway, Dubé Juggling is being forced out to make room for the new Michael Kors flagship store. …Since the news broke, we’ve received an outpouring of support from the juggling and circus communities. We want to thank our loyal customers for their support over the past 38 years in business. Because of that support, we are confident that we will continue to thrive in the future.

Dubé would like to stay in the area, where he’s set up shop for the past 28 years, and why shouldn’t he? It’s his birth right, in a way.  When he opened for business, Michael Kors had not even begun his coursework at FIT.  But we all know how it works.  Although Dubé has had a close relationship to the landlord of his building since he moved in, business is business.  Onward an upward, and all that.

This still leaves Dubé homeless as of January.  They are not closing, they are relocating, new address TBA.  So if any of you busy people out there who are juggling work and family to maintain a balanced life know of a place that could be the new home to an old SoHo friend, don't drop the ball, please contact Dubé directly.  You don't need to jump through hoops, just email them at info@dube.com.  Or even better, to stop in to show your support, join the club, and who knows, maybe you will find your inner juggler!