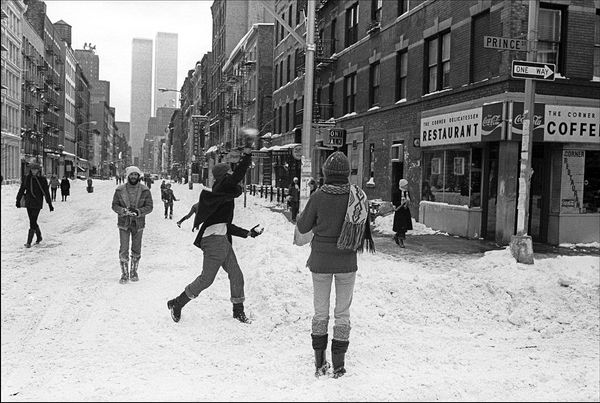 If you feel as if you’ve repeatedly read the name Allan Tannenbaum in the pages of this site, you are correct. The fact is, we would not have such a rich a visual record of SoHo in the 1970’s (or of American culture for that matter) were it not for this outrageously talented, not to mention ubiquitous, photographer.

As a young, aspiring artist from New Jersey in his late-20’s, Tannenbaum came to New York City by way of San Francisco, where he jumped up onto the stage with his camera at a Jimi Hendrix concert. “I got about 10 frames until the kicked me off. That’s how I got started taking pictures,” he explains.

Tipped off by a friend who mentioned that SoHo Weekly News, then an 8-page free paper in SoHo, was looking for a photographer, he went to the editor Michael Goldstein’s loft on Broome Street that also served as the paper’s office. Goldstein flipped though Tannenbaum’s portfolio, stopped at his photo of Jimi Hendrix, and hired him on the spot. Tannenbaum quickly became Chief Photographer for the paper. “I am truly indebted to Michael for hiring me when I couldn’t even get a job as a photo researcher for Magnum photos and was thinking if I didn’t get something soon, maybe I was in the wrong line of work,” he remembers.

Tannenbaum worked at SoHo Weekly News from its founding in 1973 until the publication closed in 1982. He documented New York art, politics, show business, music, and nightlife. His photographs of the New York rock and punk scene during this period are unparalleled, as are his images of SoHo. His subjects ranged from movie stars to the homeless population, street gangs to politicians, and, of course, SoHo artists and the gallerists who represented them.

By the mid-1980s, Tannenbaum cast his geographical and thematic net wider. He covered political unrest in South Africa, the 1986 revolution in the Philippines, and the first intifada in the West Bank and Gaza. He was in Afghanistan just after the Russians left and was embedded in Operation Desert Storm in Iraq and Kuwait.

“The irony of that was that I had gone all over the world chasing these dangerous stories, putting myself in the most dangerous place, and I got the biggest, most dangerous story of my life six blocks from my home,” Tannenbaum remarks. On September 11, 2001, Tannenbaum and his wife were at home in Tribeca when two airplanes flew past his loft and crashed into the World Trade Center. “I grabbed my camera, put on my jeans and sneakers, and I started to take pictures.” Standing under the South Tower as it began to collapse, he thought he had taken his final photograph. Thankfully, Tannenbaum survived, as did his photos.

Walking into Tannebaum’s studio (where he also lives), one is immediately star struck, standing  between a larger-than-life image of The Clash facing an ethereal portrait of Debbie Harry. There are photographs everywhere, mostly of well-known-figures, mixed in with shots of far flung lands where momentous world-changing events occurred, all of them riveting.

For me, it is Tannebaum’s images of SoHo and New York in the 1970’s that are most compelling. Seemingly singlehandedly, he documented the rise and fall of artists’ SoHo. I wonder how he managed to be in so many places in such a short period of time.

Tannenbaum’s photographs have been exhibited worldwide, have been collected in several books, and there is a forthcoming documentary film about his oeuvre. With such an immense body of work, he is now tasked with selecting the images that best represent over a generation of pop culture and political history. As Tannenbaum explains, “I think I’ve become a historian of New York City, a visual historian, so it’s part of my mission to mine these files for gold nuggets and bring them to the public.”

All photographs in this story by Allan Tannenbaum from http://www.sohoblues.com/.