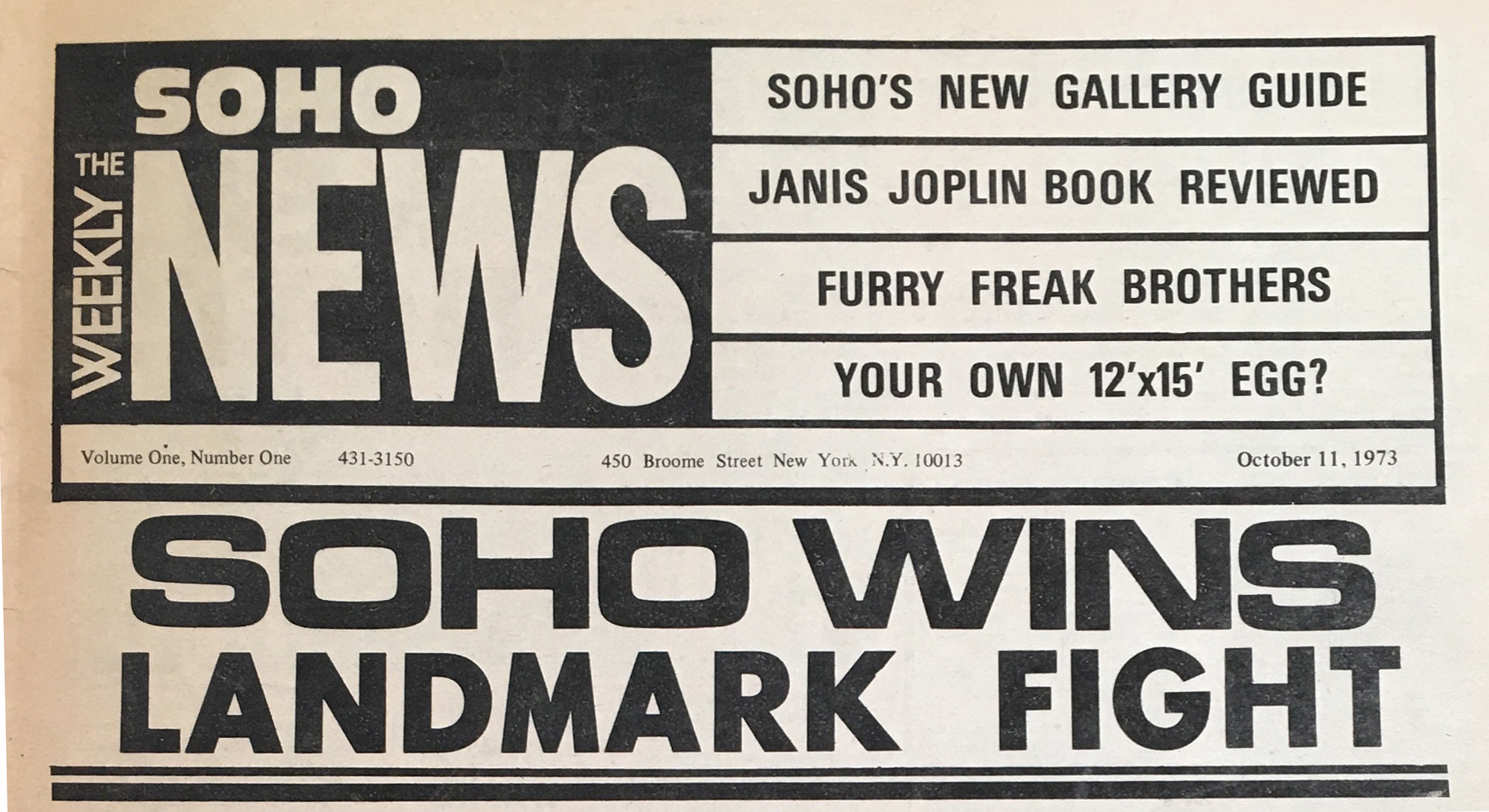 The other day, I was going through issues of The SoHo Weekly News for a research request and I came across the very first issue, Volume One Number One from October 11, 1973. I thought it merited a closer look, that it could tell us something about what our neighborhood looked like 44 years ago and also give us a glimpse of what the startup newspaper and its editor, Micheal Goldstein, had in mind at the very beginning.

The front page headline reads “SoHo Wins Landmark Fight,” announcing that SoHo had officially become the first commercial district in the world to become a landmark. The area is protected because of its large concentration of cast iron buildings dating back to the mid-19th century. Due to its landmark status, the exteriors of buildings in SoHo cannot be altered without permission from the Landmarks Preservation Commission. The article includes a humorous cartoon of what appears to be Abe Beame as Alice being asked by a faceless voice “Now let’s go over that part again, Alice, where you slipped and fell into the rabbit hole.” Beame, then City Comptroller, had reluctantly voted for landmarking the district, as he had many backers from the real estate industry in his bid for Mayor. The article states that, “The effect [of Landmark status] should be to restrict harsh tourist glitter and restrain speculation in the 26-block area, which in turn will be a protective buffer to neighboring warehouse blocks.” Perhaps it did have that effect momentarily, but we all know how that turned out. Inside the paper, there is an editorial note that lays out what the paper will be:

On the next page, in his very first “Keeping Aloft” column, Jim Stratton questions the need for the publication:

Does SoHo need a newspaper? I’m doubtful, but I’m still open. The previous effort, the SoHo Statement, failed because it attempted to sell SoHo to the Village the way the Village Voice sells the Village to the rest of the world. We didn’t need that then we don’t need it now. If the effort of this newspaper is confined to selling a neighborhood to itself, as I’m told it will be, there may be more basis for its existence.

In the end, The SoHo Weekly News took us into the 80’s, ceasing publication in March 1982. This issue of the paper includes a listings section called “Galleries, etc.” and for the record, the following galleries were listed:

From "In and Around"

Illustration from "Notes from a Dirty Old Man

There is also a gossip column of sorts, a bold face names section entitled “In and Around” that reports tidbits of news about local residents and businesses, including that “JOHN CHAMBERLAIN’S favorite fantasy is to open the largest bar in Soho on the order of Le Cupole (sic) in Paris.” Then there’s the section called “Notes of a Dirty Old Man” that features a characteristically funny/strange short story by Charles Bukowski entitled “The lady, the skeleton, the drunk and Monk” that appears to also be illustrated by Bukowski.

Then there is the form you can use to sign up for a subscription, $8.00 for one year or $13.00 for two. But what’s interesting about this is the short classifieds-style blurb surrounding the form with the headline “Husbands Wanted!!!!!!” You will just have to read that one for yourself, it’s too difficult and bizarre to paraphrase.

Also included are a book review, an exhibition review, and an article about neon signs and symbols by Rudi Stern, neon artist and founder of the gallery Let There Be Neon.

The thing about this issue that gives me the deepest sense of the SoHo vibe in October 1973, however, is the advertisements from local businesses.

Since we didn’t have any grocery stores, Pioneer boldly advertises that they will deliver to SoHo:

And of course the industrial businesses:

When it comes down to it, The SoHo Weekly News started out as a small town paper. Local news, gossip, listings, ads, coupons (and a classified call for husbands from a polyandrous Tibetan woman). Because that is what SoHo once was, a small town that tried to restrict harsh tourist glitter and restrain speculation. Ahem, speaking of rabbit holes…