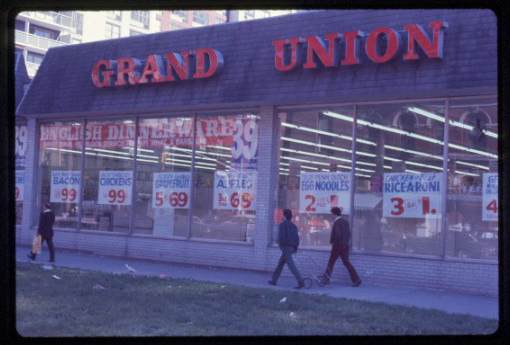 Admittedly, the Grand Union on LaGuardia and Bleecker was not in SoHo, but it was such a huge part of my childhood that I feel I must write about it.  Now called Morton Williams, the Grand Union supermarket, built to serve the tenants of NYU's Silver Towers and Washington Square Village apartment buildings, was the closest place (except for the bodega on West Broadway and Prince) to buy groceries for most SoHo residents.  A free standing-building, it is quite a behemoth for New York City standards, though no competition with the suburban hypermarkets of today.

For years and years, I would go "big shopping" there with my mother and sister.  We would fill up the shopping cart, spending (gasp!) upwards of $50.00, and have everything delivered to our loft.  It must have been not the worst way to make a living, delivering for Grand Union, because we had the same few guys bringing groceries to our house for ages.

My mother says I was about seven years old when she started sending me to Grand Union with my sister on our own.  Seven! Children's Services would be called if you did that now.  She would send us there to get, among other things, ten tubes of Crest Regular toothpaste, ten packs of cookies, and a ten packs of cigarettes (a.k.a. a carton).  My father used the toothpaste to polish the lacquer furniture he made (ancient Japanese secret), he served the cookies to his workers at tea time, and he smoked the cigarettes.  What must have they been thinking at checkout when two very little Japanese girls showed up, on a regular basis, to buy this strange assortment of groceries?  I guess they figured we'd need all of that toothpaste after eating all those cookies and smoking all those cigarettes!

The first (and only) time I ever stole anything was at Grand Union.  A Tiger's Milk Bar.  A strange thing for a kid to want, but whatever.  It happened almost by accident.  I picked one up and planned to ask my mother if she would buy it for me.  I wandered around the store for a while and got caught up looking at the Happy Days books, novelizations of the popular television series.  I realized that I needed to put down the Tiger's Milk bar to turn the pages.  With nowhere else to put it, I stuck it in my pocket and then realized that I could just walk out with it, which is exactly what I did.  After I got it home, I felt so bad about having taken it that I never did it again.  Easy lesson learned, thanks to The Fonz.

I suppose Grand Union was your average supermarket in its day.  The National Enquirer up front and a deli counter in the back.  I still call it Grand Union, though you can't get much there for fifty dollars these days.  They went upscale with the 'hood, and now they carry imported pistachios and pre-washed salad in a box (both of which I admit I buy on occasion).  I hear that NYU plans to tear it down to build another apartment building.  If that happens, where, pray tell, will a seven-year-old be able to score a pack of smokes?