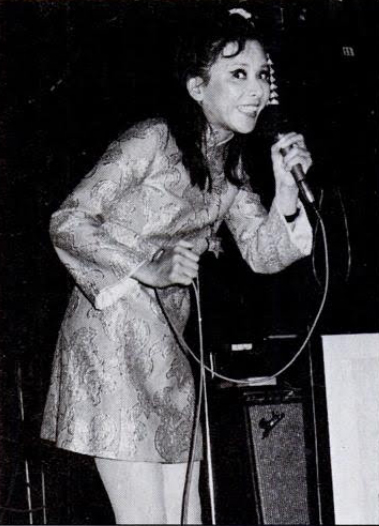 For this week’s post, I didn’t even have to come up with a pseudo-clever title.  My subject is just wacky enough to catch a reader’s attention all on its own.

The other day, I was telling some friends about Shalom Japan, a kosher Japanese restaurant in SoHo in the early 1980’s.  I went there once or twice to eat tempura and see a nightclub act.  The funniest part of the story is that it didn’t occur to me back then that there was anything out of the ordinary about the restaurant.  The restaurant was Japanese, I am Japanese, the restaurant had a floorshow, I’m a big fan of song-and-dance acts.  What’s so strange about that?

Shalom Japan, a kosher restaurant at 22 Wooster Street, was owned and operated by Miriam Mizakura, a Japanese Jew who sang, danced, did impressions, and told Jewish jokes.  In her November 17, 1980 review of the restaurant in New York Magazine, Gael Greene writes:

Dinner at 8:30.  The floor show has begun.  Shalom Japan, the vanity night-club.  Miriam is a bundle of Debbie Reynolds, stripping from kimono to miniskirt, doing Zero Mostel in Yiddish and Japanese, coaxing a surprisingly game diner from his table to join her onstage…

Miriam Mizakura is a slim, attractive Japanese-born woman whose parents converted to Judaism for obscure reasons following World War II, shortly before she was born.  In Japan, she was an aspiring entertainer, and she came to the United States to break into show business.  She didn’t have much success, though, until the day she went to visit a friend in the hospital and met Rabbi Meyer Leifer, spiritual leader of the 23rd Street Synagogue. Leifer was intrigued by the young Japanese woman with the Jewish star dangling from her neck, and the two struck up a conversation that blossomed into a kind of partnership.  Leifer encouraged her to open a kosher Japanese restaurant-supper club, and provided her with the rabbinical guidance to do it.  Mizakura reciprocated by allowing Leifer, a frustrated crooner, to sing in her nightclub.

Someone posted on Yelp that he remembered that “Miriam did a floor show and sang "Hava Nagila"...they served gefiltefish sushi.”  Another person posted on Chowhound that “Miriam also did stand up and told JAP jokes... ...it was so campy.....we always had a blast.”

One woman’s journey led to the intersection of Japanese food, Judaism, and live entertainment.  Shalom Japan did not last long.  There are rumors it relocated, but I do not know to where. What else is there to say but arigato, Miriam, for enriching our neighborhood and showing us a good time, and mazel tov, for making your (and Rabbi Leifer’s) dreams come true!