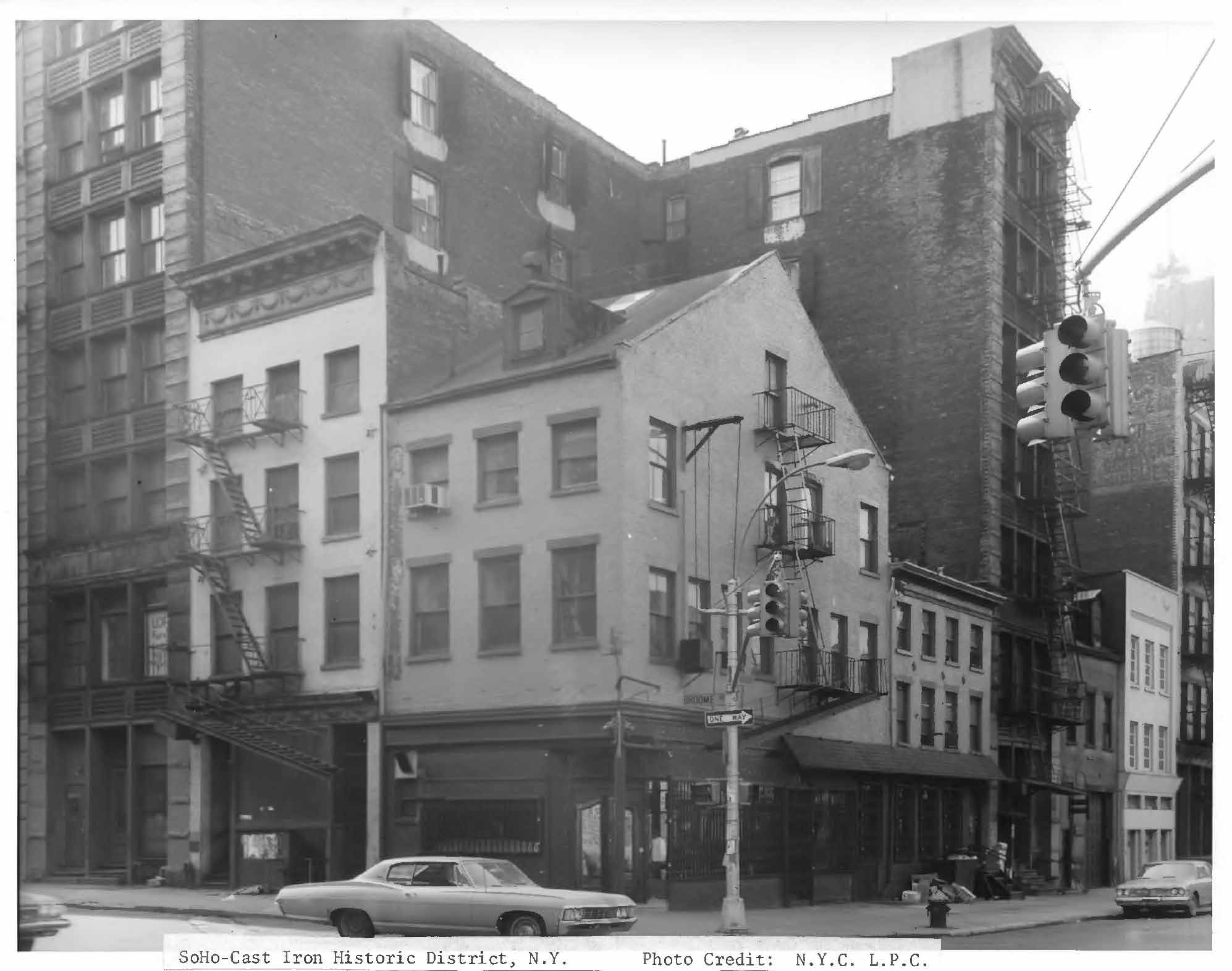 For a neighborhood that had, aside from one church that was torn down, no houses of worship, no schools to speak of, and few restaurants, SoHo sure had a lot of bars.  And many of them seemed to have been named for the street on which they were located.  Other than THE BAR, i.e. Fanelli's (see my post on Fanelli's here), there was the Spring Street Bar, the Prince Street Bar, the Greene Street Cafe, and, of course, Bob and Kenn's Broome Street Bar.  Again, as I was a mere tot back in the early 70's when the Broome Street Bar opened and when the Spring Street Bar was at the height of its popularity, I am probably not the best person to be writing about this, but I thought they should get a mention here, as they were an integral part of the SoHo community.  Those of you who were of age back then can fill in the gaps.

The Spring Street Bar at the corner of West Broaday (photo: Straatis/Flickr)

The Spring Street Bar opened in January 1972, and, according to Anderson and Archer's SoHo: The Essential Guide to Art and Life in Lower Manhattan, it was "the crossroads of West Broadway and on any given day or night you [were] likely to see Holly Solomon, Leo Castelli or Paula Cooper having lunch with clients or an artist of two."  So I guess it was for the arty-types.  It also supposedly set the tone for the "SoHo-style" restaurant when it expanded and renovated in 1977, with its "brown epoxy tables, angular windows and saffron orange bar" serving "Italian whole-wheat bread and potted butter, quiches, spinach salad and entrees that interpret both French and American cooking."  If that doesn't sound like every neighborhood meal I had with my family in my tween years. . .

The Prince Street Bar opened in 1975 and was a standard food and fancy drinks—burgers and pina coladas (those were considered fancy once)—kind of place.  The chef apparently had a thing for adding liqueurs to everything, so you could have vodka in your gazpacho and Amaretto on your Haagen Dazs.  Alcoholics beware.  The space is occupied by a Camper Store now, but I can't remember when the transition was made from foodwares to footwear.

The Greene Street Cafe was a little different from the rest.  Opened in 1979 by developer Tony Goldman, the Greene Street Cafe was a jazz supper club, the likes of which, until then, New York hadn't seen since the 1950's.  He also opened SoHo Kitchen and Bar, which was down the street.  Thus began the true transformation of SoHo nightlife from an assortment of artists bars to a magnet for a new breed of urbanite, the "yuppie" (short for "young, urban professional," a term that was coined by lawyer, author, and all-around cool person, Marissa Piesman in The Yuppie Handbook).

And finally, the last bar standing, the Broome Street Bar, a meeting place for neighborhood artists, including the late Bobby Bolles (see my post on him here), since it opened in 1972.  Another artist associated with the Broome Street Bar is Mako Tanaka, whose book Thirty Years at The Broome Street Bar: Drawings by Mako Tanaka (Beechwoods Press, Callicoon, NY, 2005), according to Amazon.com "collects works from over four decades of chalk drawings by artist Mako Tanaka that he has been drawing on the blackboard at the Soho, New York landmark since 1973."

Housed in what might be the oldest building in SoHo dating from 1825 with shutters and slanted roofs, it is certainly one of the quaintest-looking buildings in the neighborhood. Originally owned by brothers Bob and Kenn Reisdorf, Bob left the business some time ago but his name still remains.  A whorehouse in its earliest days, the building has housed a series of bar/restaurants since the 1850's, but has been a burger and beer joint since the early-1970's when SoHo was a haven for artists and before West Broadway became the Rodeo Drive of the East Coast.

Of the four bars mentioned above, the Broome Street Bar is the only one still in existence.  Do they still serve burgers in pita bread?  I haven't been there in some time, partially because it's not that close to my house and also not one the way to or from anywhere I go, but also because I could never get used to eating a burger in a pita.  And that they didn't have french fries and that they served their salads in these little tiny bowls overflowing with lettuce that was very cumbersome to eat.  But that's just me.  Countless others have made the bar their second home, and I must admit that they have managed to maintain a laid-back vibe as well as somewhat reasonable prices amidst the mayhem of today's SoHo.

The Broome Street Bar carries on.  The Spring Street Bar, the Prince Street Bar, and the Greene Street Cafe are no more.  I remember them being there, and then they were gone.  Which was the first to go?  The last?  Every time I turn a corner it seems that some old store or restaurant has been replaced, seemingly overnight without my noticing, by a Chanel or an H&M.  But the day I turn the corner onto west Broadway and find that Bob and Kenn's has been taken over by TGI Friday's, I'm outta here.