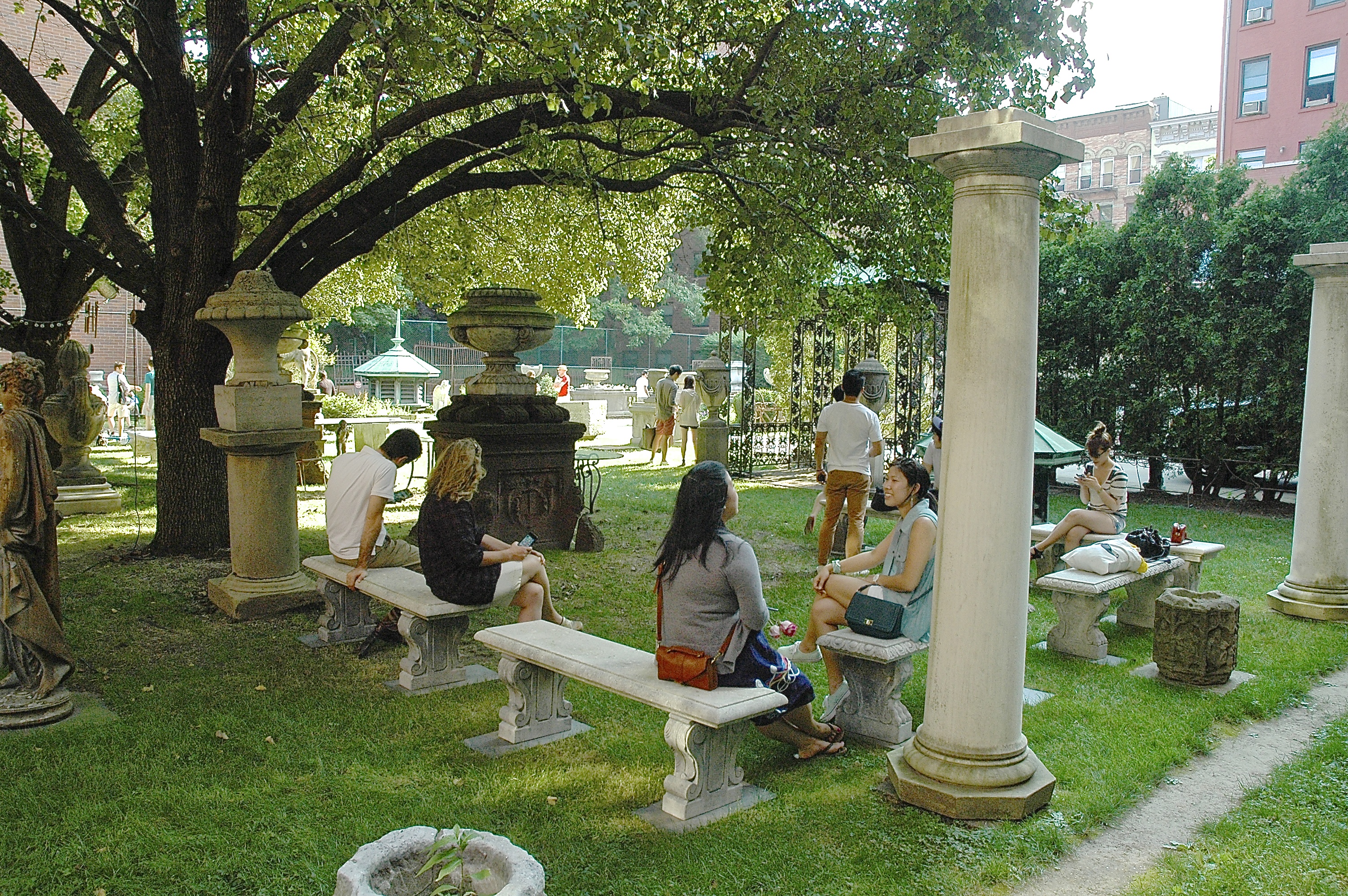 No wonder I don't like walking on grass.  SoHo is definitely not known for its green space.  Can you think of any?  There WAS the open dirt field that is now Coles.  That had potential to be green, but is long gone.  And there are a couple of weeds growing in Thompson Street Playground, but nothing much to speak of.  I was reared on concrete and cobblestones, and It is thus no surprise that as an adult I much prefer the feel of asphalt under my feet to freshly mown lawn.  So very sad.

In 1991, after I was already an adult and the damage already done, the Elizabeth Street Gallery leased an empty lot from the City, cleaned it up, and planted the beautiful garden that is there today on Elizabeth between Prince and Spring.  It is truly and oasis in an otherwise greenless neighborhood.  And now the garden might be in danger of closing.

The following is information from The Elizabeth Street Garden, whose mission is to preserve the Garden as public green, open space.  They are having a Harvest Festival on October 20 (tomorrow) from 12-4 where you can find out more about how to support the Garden.  Hope to see you all there!!!

The Garden sits on a city-owned lot that was a portion of the site of former P.S. 21.  The school was demolished in the late 1970s and in 1983, Section 8 housing was built at 21 Spring on the south side of the lot.  The site of today's Garden remained a vacant and blighted lot until it was leased to the Elizabeth Street Gallery in 1991 on a month-to-month basis.  The lessee cleaned up the lot and planted the beautiful Garden you see today.   Last summer, a group of neighbors came together to improve access to the Garden and program public events.   Our mission is to preserve the Elizabeth Street Garden as public green, open space.

The Elizabeth Street Garden hosts a number of public events, including the October 20th Harvest Festival from noon to 4 p.m. There will be activities for adults and children, performances, pumpkins and planting of over 2,000 daffodil bulbs.  Please spread the word!

Last summer, we learned that the lot was included in the Community Board 3's SPURA rezoning as a site for additional affordable housing.  Because CB 2 was not part of the SPURA discussions and our community has a wide range of views for how the lot should be used, Community Board 2's Land Use Committee will hold a hearing on the future use of the site on Monday, November 4th, 6:30 pm at PS 130, 143 Baxter Street between Hester and Grand.