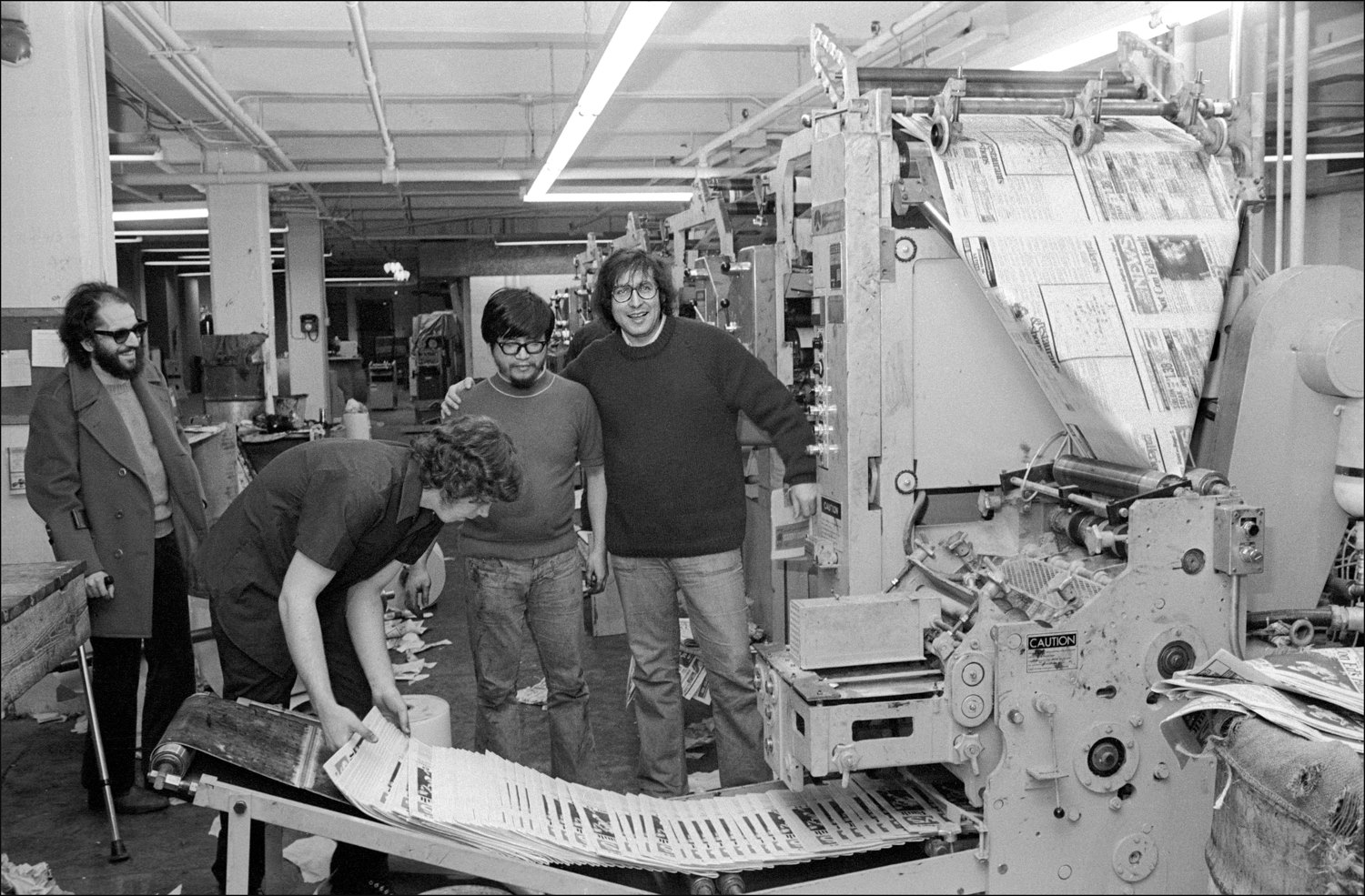 Michael Goldstein, founder of the SoHo Weekly News, died on May 19 at the age of 79. One of SoHo’s great influencers, Goldstein left his mark on our neighborhood through his newspaper, as well as his larger-than-life personality. The SoHo Weekly News (SWN) published Volume 1 Number 1 on October 11, 1973. Michael Goldstein once said that he started the paper so tate SoHo residents didn’t have to hang fliers everywhere to let people know what was going on. In an editorial in the inaugural issue Goldstein wrote:

Thank you for picking up our first issue. We are planning to report what's going on down here honestly and fairly. To do that we need your help--in telling us your problems, filling us in on what's happening and keeping us generally informed. The support for this paper, as you can see from the advertisements, comes from within the community. Starting next week, we would like to run as many community bulletins as possible (e.g.., playgroups, openings, bake sales, lost and found etc,). If you send us these items in writing, we'll be happy to print them at no charge...

So began The SoHo Weekly News, which ran from October 1973 until March 1982, though Goldstein left in 1979 after he sold the paper to Associated News Group. The paper “defined the disparate region of lower Manhattan that became known as "SoHo". If our experiment in creating a new culture and a new lifestyle eventually failed, the SoHo Weekly News did not fail in reporting it,” says contributing illustrator Harry Pincus. What began as a local paper grew in influence over the years to become a competitor of the Village Voice, the only other downtown paper to cover news and culture at the time. Goldstein founded SWN after being burnt out by a successful career in public relations. As a music promoter, Goldstein “eventually represented a long roster of marquee clients that included Jimi Hendrix, Sly and the Family Stone, Frank Zappa and the Mothers of Invention, Jefferson Airplane and the Grateful Dead. He boasted that he represented 10 different acts at the Woodstock festival in 1969, and that across the years 17 of his clients were voted into the Rock & Roll Hall of Fame,” according to The New York Times.

At SWN, Harry Pincus tells me Goldstein “hired a gang of young talents, like Cynthia Heimel, Allan Tannenbaum, Janel Bladow, Stephen Saban and Peter Occhiogrosso, as well as some old refugees and beatniks from the East Village Other and the Village Voice. Yakov Kohn, the editor, was a former Israeli ‘freedom fighter’ who ambulated with a cane and weighed about eighty pounds who had once thrown a ‘punk’ named Bob Dylan out of his jewelry store on MacDougal Street.” Those who knew Michael Goldstein have vivid memories of his strong and seemingly irksome-yet-lovable character. Tannenbaum remembers when he was first hired by Goldstein. A young aspiring photographer in his late-20’s, Tannenbaum came to New York City by way of Rutgers and San Francisco State. Tipped off by a friend who mentioned that SWN was looking for a photographer, he went to Goldstein’s loft on Broome Street that also served as the paper’s office. Goldstein flipped though Tannenbaum’s portfolio and stopped at a photo of Jimi Hendrix, his former client, and told him, “Yeah, you know how to take pictures." Goldstein sent him on an assignment to cover the Avant Garde Festival at Grand Central, promising to pay $5 a photo if they were good.

Following that assignment, Goldstein put Tannenbaum on staff at $40 per week. Tannenbaum had recently been fired  from a job as a bartender (for failing to break up a fight), so he was collecting $45 in unemployment in addition, which more than covered his $90/month rent in his Brooklyn commune. Still, $40 was not a lot of money, so to make the deal more equitable, Tannenbaum asked Goldstein to pay for his film, to list him as Chief Photographer on the paper’s masthead, and to grant him full ownership of all his photos. Goldstein agreed to these terms and is said to have given “everyone a piece of the action in lieu of payment,” according to Allan Wolper, former Managing Editor of SWN. “I am truly indebted to Michael for hiring me and giving me the rights to my pictures,” Tannenbaum says. “He hired me when I couldn’t even get a job as a photo researcher for Magnum photos and was thinking if I didn’t get something soon, maybe he was in the wrong line of work.” Peter Occhiogrosso, Music Editor and Associate Editor at SWN from 1975 to 1982, says of Goldstein, “He was the only person who fired me and then hired me on the same day.” He describes SWN as a place where people had a freedom unlike most other places, and adds that Goldstein gave him a stepping stone to a career as a writer. Occhiogrosso, whose writing focused on jazz and the downtown music scene, adds that Goldstein “let me write about anybody, whatever length I wanted.”

“At a time when The Village Voice seemed to have a monopoly on coverage of Downtown news and arts, Michael offered an alternative,” Occhiogrosso told The New York Times. “Maybe because of his background in the rock ′n’ roll world, Michael was especially attuned to the developing music and associated night life scene south of 14th Street, but especially in the semi-industrial zone between Houston Street and the business district.” Occhiogrosso, who worked at the Village Voice for around $50-$75 per story before he came to SWN, was asked by the Voice to choose between the higher paying, higher profile paper and SWN, who they saw as a direct competitor. He chose to go with SWN, even though they only paid $10 per story. When Occhiogrosso came onto staff, he told Goldstein that he had to be paid at least $50 a week, so Goldstein, who could not afford to pay him that much up front, offered him $20/week plus $30 in equity, a similar deal to Tannenbaum, who received equity through ownership of his photographs. Goldstein, a man of his word, paid Occiogrosso the accumulated $30 a week in equity when Associated News Group bought the paper from him. Another example of Goldstein giving staff “a piece of the action.” Allan Wolper was also hired away from the Village Voice. He posits that it was Goldstein’s role at the paper to keep everyone there “a little crazy.” Stories of heated arguments and even throwing objects abound. “All that yelling and screaming gave birth to a lot of great journalism,” Wolper says, adding that it was also Goldstein’s belief that anything could happen and his gift for promotion that moved the paper forward.

Harry Pincus remembers the day he was hired by Goldstein at the SWN office:

There was a loud noise, and a seemingly deranged gentleman was ejected from the bowels of the office, hurling every vile epithet imaginable at [Goldstein,] the cherubic gentleman with the oversized eyeglasses. He then paused to dump a waste basket on [Goldtein's] head, angrily slammed the door shut and fled to the street. Silence. The poor man was sitting there covered in garbage. His desk was covered in garbage.

One can only wonder what Goldstein had done to provoke such an outburst. Allan Wolper remembers that Goldstein once told every writer who worked for him to go to newsstands and if SWN was not sold there, told them to demand why. This went on until his paper was featured at the "big newsstand" on 8th Street and 6th Avenue, right next to the Village Voice. SWN had arrived. Even so, it drove Goldstein crazy when nobody believed that people were actually reading SWN. To prove that he did indeed have many readers, he decided to list an event on the back page with the incorrect time, and it worked. People showed up an hour early for the event. Point proven, and may people pissed off, I’m guessing. Despite his shenanigans, Goldstein was a pillar of his community, and through his newspaper, he had a large hand in shaping SoHo’s culture. “The SoHo Weekly News was a welcome challenge to the Village Voice — and much hipper. All of us in SoHo certainly read it with enthusiasm. Michael Goldstein was a rising star in the downtown culture,” says Mark Gabor, former member of the SoHo Artists Association, an artists’ advocacy group. “The scope of what he did was fantastic. He really gave openings to people who were coming up, emerging writers,” says Peter Occhiogrosso. Harry Pincus sums it all up by lamenting, “Those days are gone forever, and there will never be another SoHo News. Or another Michael Goldstein.”