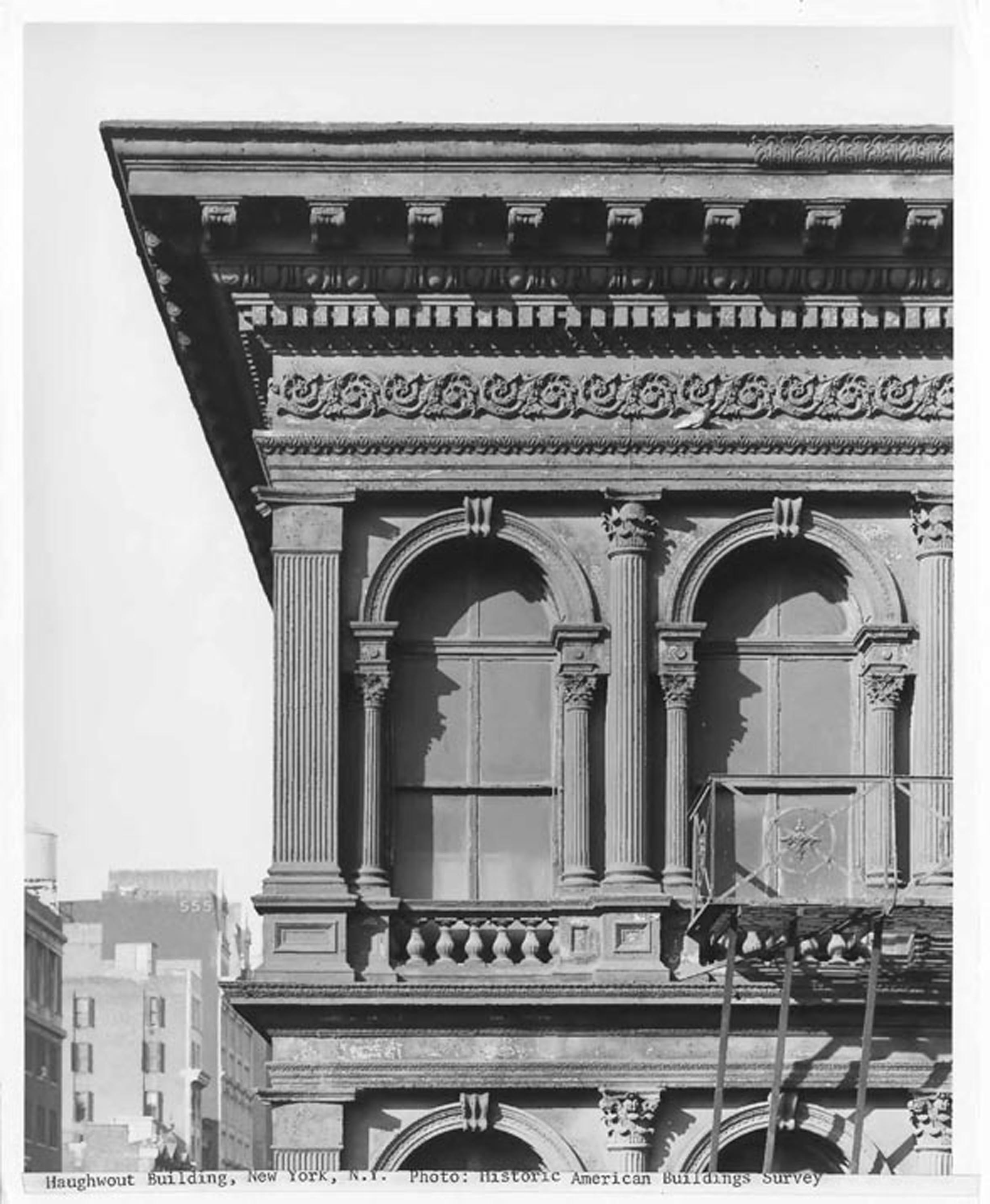 The work of the destroyers has always been made easier for them by the nature of our history: A country that is founded on a revolution is not likely to show undue reverence for its predecessors.

SoHo is also known as the Cast-Iron Historic District, as it was designated by the Landmarks Preservation Commission in August 1973.  Ornate cast iron facades were originally used to spruce up pre-existing buildings, kind of like brickface and stucco, but was later used in new construction as well.  There are approximately 250 cast iron buildings in New York City, most of them in SoHo and mostly dating from the mid to late-1800's.  An American invention, cast iron facades were not only less expensive to produce than stone or brick, but also much faster, as they were made in molds rather than carved by hand, and stuck to the face of buildings.  In addition, the same mold could be used for multiple buildings and a broken piece could easily be recast, making it a very efficient decorative method.  Because iron is pliable, ornate window frames could be designed, while the strength of the iron also allowed for enlarged windows that let floods of light into buildings as well as high ceilings in vast spaces with only columns necessary for support.

Although cast iron architecture enjoyed short-lived popularity as an architectural style, being replaced by steel-skeleton construction with high speed elevators by the 1880's, the buildings of SoHo are considered the protoypes or precursors to the skyscraper and therefore hold much historic significance in the development of New York City.

First put forth in the 1930's, the idea for the Lower Manhattan Expressway, or LOMEX as it was known, which was to run the length of Broome Street, gained support in the 1950's and 1960's and would have razed most of what is now SoHo and Little Italy.  However, community opposition to the proposed highway connecting New Jersey and Brooklyn (via some of the most historically significant areas of New York City) killed the project, and the highway was never built (see my post on LOMEX and Robert Moses here).

Overlapping the plans for LOMEX, the historic buildings of SoHo were also slated to be demolished to make way for new housing construction.  A group called the City Club put out a study in 1962 called "The Wastelands of New York City" that recommended that a large part of what is now SoHo be razed, as "there are no buildings worth saving." But then Chester Rapkin, a city planning commissioner, came out with a report that same year titled "The South Houston Industrial Area" (also known as the "Rapkin Report"), which stated that, although the number of businesses in the area had declined over the years, the old buildings still housed small industries that employed many low-income and minority workers and were also a still-viable tax revenue source for the city.

In the end, it was also a simple matter of the city's financial health that saved SoHo from the wrecking ball.  Of the minority group of people in power who preferred preservation to novelty in New York City, Brendan Gill, writer, critic, and  one time chairman of the board of the Landmarks Conservancy of New York writes:

Their unwitting allies in perserving certain remnants of the past were the poor, for if eccentricity has always been a good friend of preservation, poverty has been an even better friend.  Much of the most admired architecture of older New York—the SoHo district, for example, and scores of square blocks in Greenwich Village and Little Italy—have survived because, at a critical moment, the city didn't have enough money to pay for knocking them down.

-Brendan Gill, "Preserving the Visible Past"

The buildings, thus, remained intact, and, as mentioned above, the neighborhood was given landmark status in 1973 and was protected from any further demolition plans.  Thanks to a variety of forces coming together in the 1960's and early 70's, the Rapkin Report, the tireless work of preservation activists, and a serendipitous lack of funds, SoHo has remained and will continue to be for the foreseeable future an architecturally and aesthetically significant part of New York's "visible past."