An Alternative Education within the Public School System 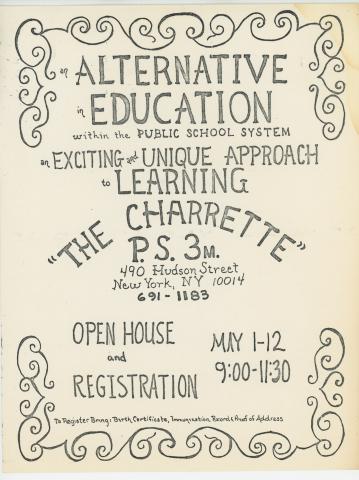 So it was a surprise to me to find out that P.S.41, in a way, begat P.S.3, back during the teachers’ strike in 1968.  According to Charles R. Simpson in his book SoHo: The Artist in the City:

A group of P.S.41 parents, a faction within the P.T.A. living in Greenwich Village, opposed the strike.  The dissidents broke the locks on P.S.3, a surplus school scheduled for demolition, demanded that it be reopened, and chose a staff from among substitute teachers.  The Board of Education, taken aback but interested in creating pressure to end the strike, paid the staff.  While the strike lasted, the parents got a taste of running a school; and when the strike ended, they demanded that P.S.3 be retained as an annex of P.S.41 in which experimental education could be carried out.  (212)

For the first few years, the parents had control over the school.  They decided, by a council of three teachers, three community members, and twelve parents, how the school was to be structured and which teachers would be hired.  The council was chaired by the school’s head teacher, who I presume was John Melser, a teacher from new Zealand who taught in the tradition of A.S. Neill, an advocate for personal freedom for children.