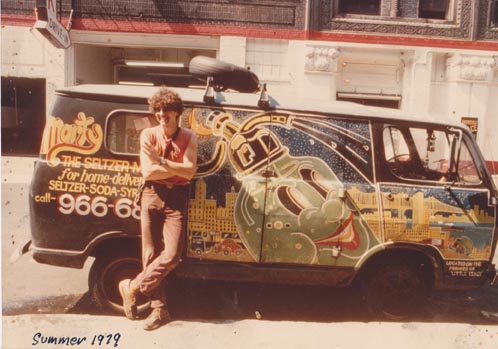 You may have seen Marty around SoHo recently.  He is usually either on the corner of Mercer and Prince in front of the Mercer Hotel or on the corner of Prince and Greene across from the Apple Store selling lovely bags, jewelry, and hats with his wife. Whereas now Marty's customers must come to him, in the 1970's it was decidedly the other way around when Marty was one of a few seltzer deliverymen (there were no women) who revived the practice of door-to-door seltzer delivery at a time when it had already disappeared into history.

I remember Marty from back in the day when he had his delivery route.  He used to deliver seltzer to my best friend Anna's house, and this was no small task.  Anna lived on the fourth floor of a loft building on the Bowery, and Marty would lug a full case of seltzer up those four long flights of stairs and swap them for a case of empties.  A case, made of pine, held ten 26 ounce siphons made of thick glass each full of delicious, perfectly effervescent water.  And he did this numerous times a day, every day.

One of Marty's self-designed ads

Marty told me he got into the seltzer business after he got back from spending some time in India, when he was staying with a friend who had his seltzer delivered.  At first, he was going to buy the route from his friend's deliveryperson, but when that didn't work out, he painted his van and went off on his own.  At first, it was only a hobby, but word spread about Marty's business and then his hobby became his profession.  The very olde tyme-seeming practice of having beverages delivered to your home in antique, reusable bottles (new bottles were not being made, even back then, so each one was precious) turned out to be something New Yorkers craved, only they didn't know it until the likes of Marty went into business.  As one of four such deliverypersons, Marty's territory was downtown, from Canal to Thirtieth Street.  He did a brisk business until he left New York to live abroad in 1983.

A Pratt graduate, world traveler, Vietnam veteran, and former Madison Avenue art director, Marty has had an interesting-sounding life.  In a 1979 New Yorker article, Tony Hiss wrote that he "looks like what Bob Dylan would look like if he kept regular hours."  An intelligent, adventurous, and reserved but very kind man, he has done and seen a lot, including the rise and fall of the old SoHo.  When asked what he missed most about SoHo in the 70's, he replied, "There's not much I don't miss about it."