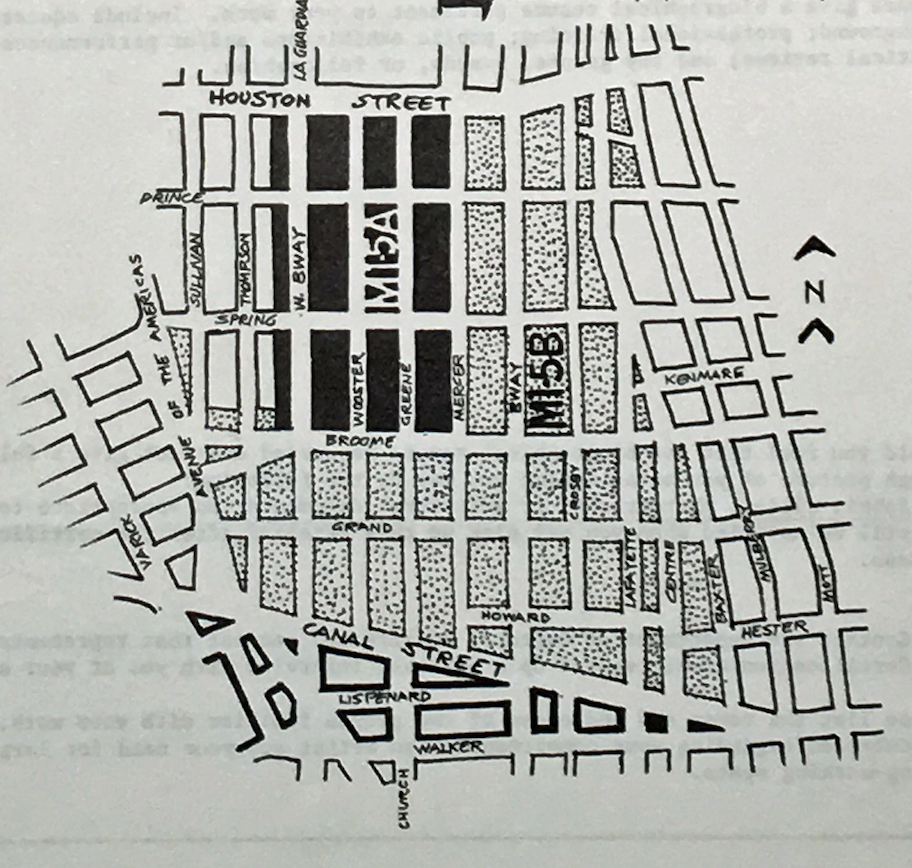 On Monday, October 23, I led a Community Conversation at the Mulberry Street branch of the New York Public Library on “SoHo in Transition.” It was the first in a series of three such conversations to take place this fall that examine SoHo’s past, present, and future. The purpose of these conversations is to engage dialogue that creates a greater connection among old and new residents of our community. This first conversation focused on SoHo’s past.

The new 55,000 square-foot Nike superstore on Broadway and Spring is all new construction.(source: The Villager)

New York City has never stopped changing. Change is what defines us as a city, yet today people in neighborhoods across New York are alarmed by the rapidity and direction of the city’s development. Many feel that the “mallification” (some might even say “mollification”) of New York City through the proliferation of big box and chain stores has erased much of what made New York, and SoHo, unique in the world.

In this sense, SoHo has become unmoored from its history, from what makes the neighborhood singular and therefore worth celebrating. Through interviews with a long-time SoHo resident and a relative newcomer to the neighborhood, followed by a lively discussion about what people feel is special and specific to SoHo, the group came up with a varied list of things in SoHo that are worth preserving as we move forward into the future.

Many attendees felt that SoHo is losing its local color and charm, and that one cause of this was the fact that many small businesses have left the neighborhood due to rising rents. Several people also felt the need to preserve the architecture of SoHo and to monitor all new construction and the buying and selling of air rights. The preservation of green space came up, specifically Elizabeth Street Garden, as it is the only green space in SoHo. Others said that SoHo has already lost its sense of community and a sense of cultural history, and that we should renew connections between neighbors.

This is not to say that anyone was keen on going back to the old days, or for SoHo to stay frozen in the present. Several people mentioned the many vacant storefronts throughout the neighborhood, speculating that impossibly high rents coupled with a dramatic shift in the retail landscape (mostly to online vendors) have led SoHo to a possible turning point. Someone mentioned that SoHo is always changing, from an industrial zone to an artists’ community to a retail hub, and there definitely was a sense in the room that we were on the verge of another major turning point. SoHo will continue to develop, but its stakeholders can have some say in how it develops.

The Trump SoHo (2008, Varick and Spring) was originally built as residences, the building was too tall for the area's zoning, so it was converted into a "hotel" which the inhabitants can only live in for part of the year. The building was then built higher than allowed even for an hotel. (Source: Wikimedia Commons/Beyond My Ken)

Thoughtful development can be enacted through various means. One great tool we have to preserve SoHo’s past is through, well, preservation. The SoHo-Cast Iron Historic District was designated in 1973, which means that buildings in the district cannot be demolished or their facades altered. New construction is permitted only on empty lots, though those are very rare these days. The Greenwich Village Society for Historic Preservation (GVSHP) was founded in 1980 “to preserve the architectural heritage and cultural history of Greenwich Village, the East Village, and NoHo. GVSHP is a leader in protecting the sense of place and human scale that define the Village’s unique community,” according to its mission statement.

Much of SoHo’s preservation advocacy is initiated by the SoHo Alliance (SA). SA’s predecessor, the SoHo Artists Association, advocated for historic districting and zoning changes. Now SA and other community advocacy groups, along with many individual residents, advocate for “controlled and appropriate development – a balance between residential and retail, seeking a quality-of-life that benefits everyone who visits, lives or works in SoHo,” in the words of Sean Sweeney, SA’s executive Director,

In addition to preservation, zoning laws regulate the landscape of our neighborhood. Before SoHo became a mixed-use (residential+commercial) neighborhood, SoHo’s first residents, mostly artists, were living here illegally, when SoHo was zoned solely for manufacturing and commercial use. Artists advocated for zoning changes to legalize their live/work lofts. “Mastering the Metropolis,” a recent exhibition at The Museum of the City of New York, celebrated the centennial of our zoning laws:

The character of New York’s varied neighborhoods is governed by a novel set of rules first envisioned by New York reformers 100 years ago – the groundbreaking Zoning Resolution of 1916. Zoning, which was designed to tame the unruly process of free-market real estate development, has continued to shape the city we know today in countless, often unseen, ways.

When it comes to the absence of a sense community in SoHo, I think one of the reasons why there is little neighborhood cohesion is that there is no place where SoHo residents can meet, gather, interact, and share ideas. In other communities, such a place would be a house of worship or a community center. When SoHo’s population was small are less diverse, there were restaurants, cafes, and bars where one would encounter people from various sectors of the community, artists, business owners, workers, families. The disappearance of these places has left a void.

Karissa Lidstrand, in her guest post on Placemaking and SoHo writes:

Another reason SoHo residents may not feel connected to each other is that they do not have any shared sense of history. Although they do not share a personal history, they share a history through the neighborhood. The SoHo Memory Project aims to shed light on this connection. It is surprising to me that there is no neighborhood or historical society to educate residents, building owners, visitors about the history of our neighborhood. As I wrote in my post "SoHo Past, Present, ...Future?":

One of my main goals moving forward … will be to think about how The SoHo Memory Project can create mutually beneficial programming that will bring past and present together to create a future for SoHo that will leverage what makes SoHo unique to benefit all members of our community. To do this, we must devise strategies that leverage the power of our successful commercial district to serve our community’s arts culture while driving a broader agenda for change, growth and transformation in a way that also builds character and quality of place. In other words, we need to find ways for art and commerce to work together to create win-win situations where the missions of all involved are fulfilled.

The most cynical of us will throw up their hands and say, what’s the point? People in New York no longer know their neighbors. People cannot see past their own doorstep. Developers with the cash will pay to play and there’s nothing any of us can do about it. Believe me, I often feel that way too. I have often thought that this is not my SoHo anymore, that it belongs to others with whom I have no connection. I even often think of leaving. But where would I go? There’s really no place else I’d rather live. So until that changes, I’m here for the duration. There are many things about SoHo that I love, the beautiful buildings, the (albeit fragmented) community, and especially artistic community that still remains here.

What do you think is worth preserving about SoHo as we move into the future? And how do you propose we move forward as a community to make sure these things are preserved?

Living Lofts: The Evolution of the Cast Iron District (Urban Omnibus, June 2013) About zoning and SoHo.

Our Visible Past (July 23, 2011) About LOMEX, the Rapkin Report, Brendan Gill, and preservation.

(W)here is New York? (September 3, 2016) About my relationship with the new SoHo and a sense of community (or lack thereof).