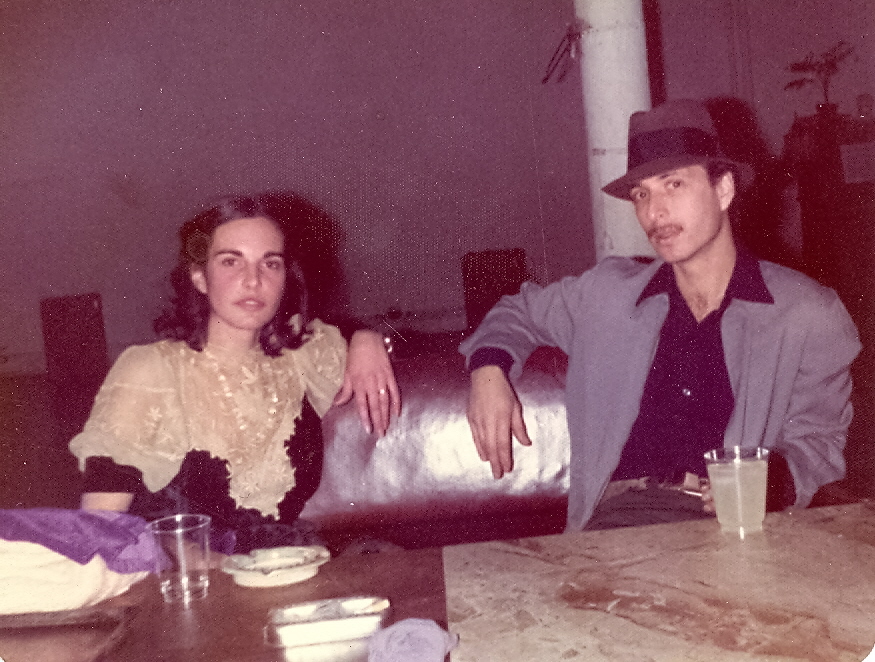 The following is a profile of Leonard Goldstein, written by his daughter Bethsheba.

My father, Leonard Goldstein, was born in 1945. He grew up on Longfellow Avenue in the South Bronx in the 1950’s, the 7th child born to Eli Goldstein and Kathrine Mednick. My father’s parents both grew up on the Lower East Side. Grandmother Katie worked as a secretary for her Russian immigrant parents who were tailors by trade and owned a clothing store. As a teenager, she worked for the Shanker Sheet Metal Company, which produced, sold and installed decorative tin metal ceilings in many of the buildings in and around SoHo. This is where my grandparents met and fell in love in the 1920’s. My father worked for my grandfather installing ceilings and learned carpentry skills from him.

Portrait of Leonard by the artist Colette (ca. 1970) drawn at the Spring Street Bar

As a teenager, my father attended the High School of Industrial Arts in Manhattan and then attended the University of New Mexico where he studied painting and architecture. He studied abstract painting with the late John Kacere, who lived in SoHo in the early 1970’s and was known for painting over-sized photo-realism paintings of his wife dressed in sexy lingerie. I remember once visiting his loft with my father as a small child and seeing one of his huge boudoir paintings.  Sometime around 1967 my father met up with the sculptor John Chamberlain at UNM and was offered a chance to work for him in New York on his compression art series and some early foam sculptures. Chamberlain also introduced my father to the art scene at Max’s Kansas City.

From the early 1950’s, my father earned living working as a carpenter, assisting his father install tin ceilings and then renovating for The Mass Brothers Construction Company. During the early 1970’s, my father renovated theaters and art galleries in SoHo. In 1971, he helped build Robert Wilson’s theatre on Spring Street. In 1972, he worked with a small group of SoHo artists that collaborated to build the Dwan and Weber Galleries at 420 West Broadway. Over the years, he became well know in the neighborhood for his affordable loft renovations.  He worked for the photographer Richard Avedon, renovating his studio and in 1973, he built a counter in Giorgio Deluca’s cheese shop on Prince Street. His last project in SoHo was in 1991 at the home and personal kitchen of the Italian chef Giuliano Bugialli on Wooster Street.

In addition to doing renovation projects throughout Manhattan, my father was (and still is) also a painter. His early work consisted of large, over-sized abstract pointillism paintings. The patterns he used were based on the then-new technology of radar imagery that was shown on television in the early 1970’s. Several of his paintings depict the killer hurricanes and tornadoes that touched down in the US around that time.

Over the past few years, I have been discussing these stories with my father in an attempt to document the work he has done. My father was never the kind of person to write down anything about the projects with which he was involved.  He was too busy working and being a full-time single father. There was little time left for promoting his work as an artist. I am quite sure the task of single parenthood was more then enough to contend with. As we discuss his life and work, I am learning more and more about my father’s professional life, and I am constantly amazed by all of his experiences.  Talking to him now, I realize he has never really slowed down to assess all that he has done throughout his life.  I have taken it upon myself, then, to be the chronicler of Leonard Goldstein, painter and father.

An interview with Leonard Goldstein: