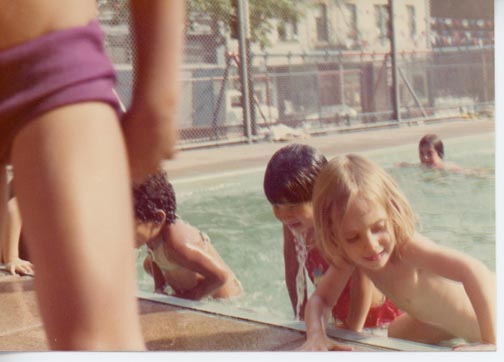 For me, summer always meant dips in the Thompson Playground pool. Before they renovated it, it was none too clean, but we all built up our immune systems there and we all lived to tell about it, so no harm done

I was in Thompson Playground (now called Vesuvio) the other day with my friend and our children.  We had gotten a pizza from Ben’s and were looking for a spot to sit and eat lunch, but all the tables were taken.  I asked a family at the big picnic table if we could sit with them and they obliged, sliding over and letting us squeeze in.  As we were almost sitting on each other’s laps, we all started talking about the park and the neighborhood, and it turned out that our tablemates grew up playing in that park as children, just as I did.  They now had children of their own so they must have been around my age.  When they left, my friend commented that she found it interesting that I had grown up in the same neighborhood as they did, yet we seemed to be from two different worlds.  She was most perplexed by their accents, old-school New Yawk and proud of it, and my lack thereof.

It’s true. Thompson Street is only one street over from West Broadway, yet, at least back then, it was a world apart.  The children who grew up to the west of West Broadway tended to be from Italian-American or Portuguese-American working or middle-class families who all knew each other and went to Catholic school, either St. Anthony’s on MacDougal or Our Lady of Pompei on Carmine.  They also tended to have longer histories as Manhattanites, unlike the residents of Wooster, Greene, and Mercer Streets, the blocks east of West Broadway, where the “pioneering” loft dwellers lived.  But we all often shared the same physical space on Thompson Street, especially on the block between Prince and Spring Streets, where Thompson Playground and pool, Mary’s Candy Store, and later, Ben’s Pizza and Milady’s Bar, the bookends of the block, acted as social equalizers.

There is no doubt that there was often tension between the two “camps.”  Signs of development and gentrification were also signs of upward mobility to many of those who had lived in the neighborhood for at least a generation.  The newly arrived artists, however, did not feel that way.  Commercial and real estate development were considered the enemies that would ruin the creative oasis they had created for themselves below Houston Street.

But what did we kids know or care.  Playground!  Pool!  Candy!  I probably swam with the people I met at the picnic table more than once as a child.  That filthy pool!  That which does not kill us makes us stronger, right?  And that sad little playground.  It was renamed Vesuvio after the bakery on Prince Street owned by Anthony Dapolito, a.k.a. “Mr. Parks,” who tirelessly advocated for open spaces in the neighborhood until his death in 2003.  After we’d tire ourselves out swimming and climbing, we'd run down to Mary’s to load up on sugar so we could start the rampage all over again.  I remember Mary’s being kind of gloomy for a candy store.  But they had what we needed.  Candy!

Now that I think of it, that block was also “neutral” or crossover territory for the grownups too.  Mary was part of the Fanelli family that owned Fanelli’s, the meeting place of blue-collar workers and artists alike, and later Milady’s, on the corner of Thompson and Prince, another well-appreciated watering hole.  And Dapolito and his bakery were loved by all.

Then the deli on the corner owned by a Korean family came along.  One of the first in Manhattan.  I remember thinking to myself, what are those guys doing setting up a grocery store around here?  Little did I know that they would DEFINE the New York grocery store in the years to come!  Next maybe was Auggie’s, the Porto Rico coffee place (which sadly closed its door recently). But now I think I’m getting into the late-80’s.  In any case, that block, like all the other blocks around it, changed slowly.  I’ve seen Nick Nolte, Sandra Bullock, and a host of other paparazzi magnets in Vesuvio playground since I’ve begun hanging out there as a mother.  It’s definitely lost, and gained, something over the years.  But I’m happy to know that I can still run into some old timers there, even ones who grew up on the other side of the tracks.