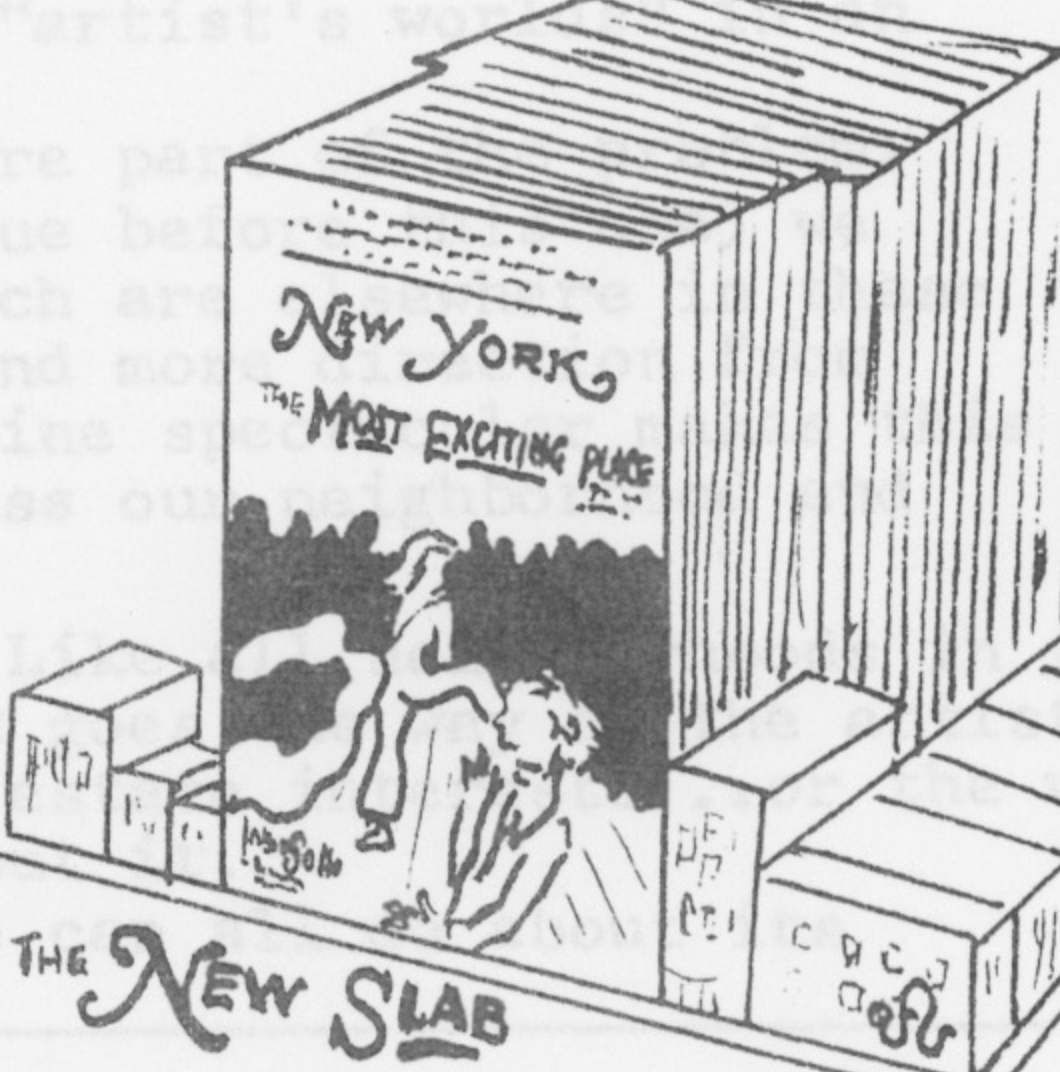 The Times They Are a-Changin'

This piece by Jim Stratton appeared in the June 7, 1974 issue of the SoHo Newsletter in response to a series of articles about SoHo that appeared in the May 20, 1974 issue of New York Magazine. These articles appeared around the time when loft living was transformed in the popular consciousness from a way of life to a "lifestyle."  SoHo residents fought valiantly to protect their Shangri-la, or to at least slow down the pace of development in their neighborhood, but, in the end, no person or group of people was able stem the tide of hipification.

Illustration from the SoHo Newsletter, June 7, 1974

The Most Exciting Place to Destroy in New York

“…This is the fourth time SoHo has arrived.  Perhaps more than any other part of the city, the area has swung between boom and bust…”

Thus begins part of the first of a superficial, counterproductive, and downright mendacious glimpse of this neighborhood by New York Magazine.  What is most galling is that the magazine’s so-called reporters had access to much material and many people, then chose to ignore all that didn’t fit with the narrow profit motive of their publishers.

This line quoted above was a rather senseless comment/headline from the lead article, which itself was no more than a paraphrase of a research report done by the Landmarks Commission in conjunction with this neighborhood’s historic district designation.  A similar, but hopefully more tasteful, synopsis of that report appeared in this Newsletter last year.

That Landmarks historical account shows with much affection that in New York City, a neighborhood is really a process… a subtlety missed by reporter Dorothy Seiberling in her NYM article.  Many factors bring about change, whether it be gradual or quick, for better or for worse, for richer or for poorer.  The factor of the snob-appeal of New York Magazine is calculated, probably deliberately, to hasten the change for richer… and for the worse.

Contrary to Seiberling’s leading premise, SoHo has probably been more stable longer than any other part of the city.  For more than an entire century it has remained a mercantile and warehouse district, relatively unchanged since the “fair Quakeresses” of Mrs. Hathaway and the “French belles” of Miss Lizzie Wright chased away the middle class in the mid-19th century.  Most of the buildings in the area were built during the latter half of the 1800’s and have housed the same kind of industries ever since.  In a real sense most of this was the “boom” period…merchandising thrived, workers found employment, and all was stable.  “Bust” began a score of years ago when competition, automation, and sliding economic conditions began to take their toll of local industry.  The buildings were still in good condition but they were organized vertically, with slow elevators and crowded streets, and, one by one, businesses in the smaller buildings began to find their spaces inefficient in competing with modern corporate techniques.

As industry moved out, a hardy kind of pioneer tended to move in…the artist seeking space.  Conversion of spaces to living, however, turned out to be almost irreversible, like the drying out of the Everglades.  Rag waste companies, sewing machines, cardboard box-makers, and doll factories were disappearing, and the only new industry willing to take their place was live-in art.

Faithful to its monied mentality, New York Magazine now seeks to be catalyst to a further conversion…the supplanting of the artist by the fashionable, the uptown, the “arrived.”  What they picture in most of their 25 pages of flummery is only partly real…it may represent, or misrepresent, perhaps 10% of residential SoHo, and residential SoHo still represents only a fraction of all that is here.

There are some artists with some money and some resources sufficient to put together a Better Homes and Gardens loft, and that’s fine.  There are other artists who can make a space eminently livable with a lot of hard work, and that’s fine too.  But there are even more who don’t pay much attention to the fixtures and just want to work on their art, and that may be the best of all.  The range is probably a typical sine curve, with New York Magazine aiming only at the tiny upper end to satisfy the salivations of their hip readers.

Part of what makes the magazine spread so damaging is not just its snob appeal, but also that it turns adversity into an attraction.  Just enough spirit of adventure to tantalize the ennui of the wealthy…suffer just a tiny bit along with the phalanx of workmen as they try to fit your chosen wall around a sculpture of ceiling pipes, or attempt to chop through an unexpected beam to bring up your winter’s warmth.  Suffer, baby Jane, suffer.

Romanticizing the hardship…for indeed it does exist…to sell it to people who have enough comfort where they are and have no reason to seek out the few artist work spaces that remain in New York Magazine’s legacy to SoHo and to art.  For, as is painfully obvious about their treatment, neither the magazine nor its reporters give a damn about art, creative energy, or the need for space to work… they are only interested in real estate and the kitchen cabinets.  Practically everyone pictured is an artist, yet there is no sign of the art neither in picture nor in commentary in five of their seven “featured” spreads.  There was a gratuitous sneer with every reference to the “poor starving artist,” a wink at every reference to artist certification or investment possibilities, a dig at the artists’ “exclusivity.”  Self-serving quotes from brokers, misquotes from artists and gallery owners, and a passion for cosmetic SoHo seemed to be the mark of the NYM feature writer, Joan Kron.  She saw only what they thought the upper East Side would like her to see.

The only reference to the SoHo Artists Association, unsurprisingly enough, was through the words of an artist long known to be rather dyspeptic about SoHo. Coincidentally, he happened to be the one artist who got his work as well as his loft featured in the spread.

“…Irresponsible and thoughtless…’ he apparently described the SAA, decrying what we have done to publicize the neighborhood.  He has, however, managed to get his loft pictured in a good many other such SoHo centerfold spreads.

For his information, the SAA’s last street festival was in 1969, and its last loft tour was shortly after that.  They were tactics used then to bring muscle to our negotiations with the city.  Since then the SAA has been working, in fact, to minimize neighborhood publicity…a nearly impossible task when there are local folks who leap into color magazine spreads to talk disparagingly about “artist’s worlds” in an open invitation to the chic to come see.

In our December 1973 Newsletter (the issue before this one) we circulated a questionnaire, the results of which are elsewhere in these pages, and plaintively called for more help and more direction from members of the community.  The New York Magazine spectacular makes this an ideal time for us to get together to discuss our neighborhood and its problems.

Come to the public meeting.  See what we can do about its direction together.