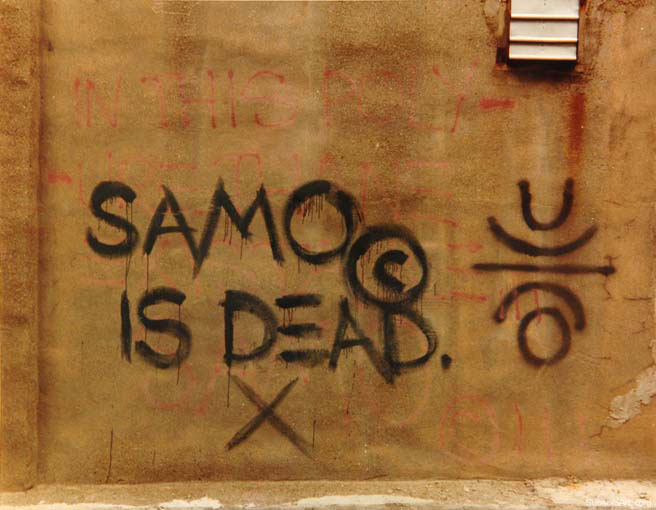 Happy summer everyone! Thanks to all of you who have shared their SoHo stories over the  years (those of you who have not yet filled one out, click on the link above to submit one).  It’s been great to read your memories of old SoHo.  I thought I’d share some of them here anonymously.  Although I have received a wide variety of responses to each of the questions, I feel that I can somehow relate to all of them because my memories of SoHo, like yours, are so varied, bitter and sweet, dark and light, foul and fond. At the end of this post, I've included links to recent pieces on SoHo and old New York!

I still love the old buildings, the urban landscape. I’m sad it’s so commercialized. I loved the remoteness, the outlaw feeling. I remember going home from the bar at night, walking down the empty center of the street instead of the sidewalk, because it was safer.

The deserted streets, the cobble stones, I remember the 18 wheelers.

The desolate feeling.  Soho was a neighborhood then. The Italians on Thompson Street. The kids all met at the park.

All the galleries and how remote it was from the rest of Manhattan.

Its spontaneity, the creative use of space, the community of artists, the vacant lots that we’d hang out in, too many things to list.

Art Galleries and the way everyone was involved in making art.

The quiet of the streets, the look of almost desolation on the weekends.  The feeling that we could go anywhere and do anything and explore any corner of the neighborhood as young children like you might expect in a quiet town in the suburbs.

The vast emptiness and community.  The light, the rents, knowing almost everyone, the creativity, the architecture, the empty cardboard fabric spindles put out as garbage that my brother and I would sword fight with.  Dean and DeLuca being a cheese shop.

Cheap space and privacy with a sense of ‘small town’ community.

Bleecker Street Cinema, the lack of chain stores, the feeling that this was real NYC, the Greek Restaurant on Bleecker, the fact that is was really a small town in a big city.

I miss how it was a real neighborhood and not just the pretentious commercial district it has become.

I hated getting mugged. Also, some friends were actually not allowed to come to my house because it was such a “dangerous” neighborhood. ha.

So hard to get food for the family.

No places to shop.

Our moving building garbage bags because there were rats running around inside of them.

No heat in building nights and weekends.

The pending changes, the visitors who looked at the area with a sense of comic awareness and judgement.  Grand Union was a mainstay but I don’t miss shopping there.

It was hard to catch a cab. Billboards above Blimpie at Canal and Lafayette (image: Jaime Davidovich)

Playing at playground east of Silver Towers while my parents climbed the fence into the field at the NE corner to play softball.  Judson Health Clinic.  Mary’s Candy store on Thompson.  Dumpster diving!  Running along Greene or Wooster along the tops of loading docks and other building structures playing “don’t touch the ground” with my brother.  Sword fighting with cardboard tubes left over from bolts of fabric.  Climbing in and on the bread delivery trucks at Wooster and Prince.

Paula Cooper Gallery when it was on Wooster Street (photo: Jaime Davidovich)

The loft parties after gallery openings.

Walking home after midnight in a snowfall. Walking past a store window on West Broadway and seeing a pair of exquisite shoes I couldn’t afford (I think there was one boutique there then). Meeting Isamu Noguchi on my roommate’s couch, in her loft (he was her friend).

Dragging in discarded furniture for home and studio; having people yell our names outside the building cuz we didn’t have buzzers, then throwing a sock down with the key in it; having all mail put into a slot in the street door;

Living in my loft when I was fixing it up. I was the only person in the whole 12 story building at night and on weekends.

The streets were always dead at night. The neighborhood was like a giant park. We use to ride our bmx bikes everywhere. I remember eating on Prince Street at a place called “Food”.

Too many.  But breaking my leg when my bike flipped over the curb on Greene and Prince ranks up there.

From "On the Bowery" National Geographic, September 1981

Jake and Peaty his dog living on the street, working the loading platforms. Fire in the barrels for warmth.

The lights in the artist’s lofts high up at night.

Crazy mad art scene. MusArt Spiral Foods, watching the WTC buildings go up from my south facing windows, waiting for a call from Arnold about the evening’s parties.

Building our space from scratch and all the truly insane things that we went through to get that done.

How quiet it was after 5pm.

Walking my dog at 6:00 am and watching everyone stream into the neighborhood going to works from the R and the 6 trains, all going in one direction while I walked in the other with the rising sun streaming down the street making the old building seem new and glistening.

Artist Rick Parker and his dog on Prince Street in the 80s (photo: Rick Parker)

Some of the big street happenings that shut down Prince and West Broadway.

The snowstorms, how they shut down entire blocks.  The playgrounds in what is now the Coles center and how the ballfield on Houston and Mercer was really a lot of stones and dirt, there was nothing green about it.

Playing on the street with my friends. Jumping robe and playing handball in Thompson Street Park.  The R&K bakery truck and the daily news night owl edition.  Egg creams  and walk aways at Sammys. My mother calling me from the window.

I have so many.  Here is one:  My mother sent me to the bodega on West Broadway and Prince street to get her beer and cigarettes when I was 9. One of the guys who worked at the bodega sent me home to get a note from my mother.  When I returned with the note he put the 6-pack in a paper bag and walked me half way home before handing me the bag.  I think he was nervous about breaking the law.  That kind of thing would be impossible today.

Walking down deserted streets, even in the middle of the day.

How can I pick one?

And for a little added summer reading and listening, ...

A new podcast about SoHo from The Bowery Boys: The Story of SoHo: The Iron-Clad History of ‘Hell’s Hundred Acres’

An article about the Loft Law from Artsy: How Artists Fought to Keep SoHo Rents Affordable—and Why It Matters Today