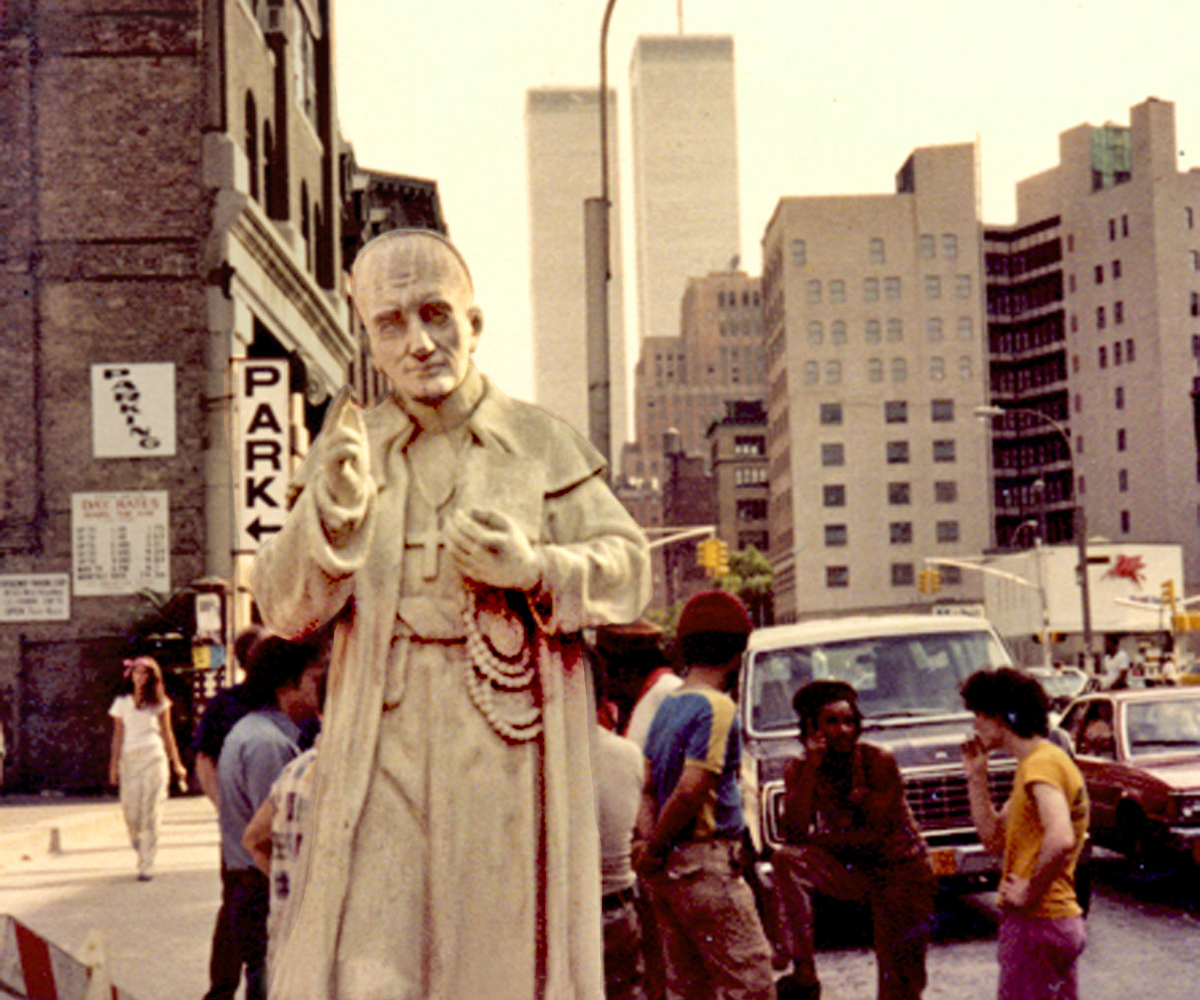 This amazing photo, part of a series of the razing of the Church of St. Alphonsus Liguori taken by artist Harry Pincus in 1981, tells many stories. It tells us that there used to be a church where the Soho Grand Hotel is today. It reminds us that the twin towers once stood downtown until they didn’t. It is proof that West Broadway was once home to a community of German Catholics and then at some point became a victim of urban decay and that it is now an affluent street with a high-end hotel.

I asked Harry what he remembers about the church’s demolition:

I don't remember much about the church, other than that the demolition was a terrible thing to see, and it went on for a while that summer. They also demolished a beautiful red brick rectory…. At the time, I assumed that the supposed structural deficiencies were a ruse for someone's blatant real estate grab.

I probably would have assumed the same thing. Yet the 1872 church was in fact slowly sinking into a streambed and had to be taken down for safety reasons. Artist Susan Fortgang tells me:

The church was torn down because it was sinking and there was no relevant congregation. No one could raise the money required to restore the foundation of the church an so the entire property was sold to Hartz Mountain (in 1988), who eventually built the hotel.  During that time we tried to stop the hotel, but we were not successful.  Sadly, religious institutions, many of which are a part of New York history, are not automatically landmarked.

In another photo from the series, artist Rene Moncada pays homage to the salvaged statue. I asked Harry if he remembers anything about taking this photo:

As I recall, I just happened along, probably on my way to Pearl Paint on the day that the statue was being carted away. Rene was there with his hard hat, and was probably aware that I was taking pictures with my little pocket Olympus XA. It was a surreal scene.

Moncada, best known for his infamous “I Am The Best Artist” murals painted on walls all over downtown Manhattan remarked:

What is amazing is that the church was demolished without any protection structure surrounding it.  Anyone could go inside and take what they wanted, and many did!

If you look in the background of the photo, you can see some guy is sifting through the rubble, and Moncada himself is wearing a hart hat, so one must wonder what he was doing there!

I recently spoke to someone else who more than sifted through that very same rubble. Artist and cartoonist Rick Parker risked life and limb to salvage the cross from the roof on the Thompson Street side of the building.

Parker writes on his blog, Autobiography of a Former Zygote:

There was a large wrought iron cross at the apex of the roof on the building’s west end. No doubt, it, too, would have been removed had Thompson Street not been too narrow for the wrecker and crane. The cross had probably been made by a German craftsman on a forge one cold Winter’s day during the Fran- co Prussian War and transported across the ocean in the hold of a merchant vessel. For the last hundred and ten years it had perched atop the upper story of the nave wall rising above the aisle roof, probably one hundred and fifty feet above the street. Only brave birds dared rest on its outstretched arms. I was determined to save it.

After climbing to the roof of the gutted church, Parker was able to lasso the five-foot-tall cross and somehow get it down to the street and into his studio on Grand Street.

Once the wreckage of the church was removed, the lot remained vacant for close to fifteen years. In the early 1990’s, the Grand/Canal Park Group proposed making the land into a park. SoHo did not and still does not have any green space, and because the water table was just below its surface, a park, they argued, would be the best use of this site. The Group’s brochure includes a star-studded list of supporters, including Laurie Anderson, Eric Bogosian, Leo Castelli, Spalding Grey, Agnes Gund, Isaac Mizrahi, Meredith Monk, to name only a few.

The Group also co-sponsored an art show called SOS: Save Our SoHo that also included a bunch of A-list supporters, to raise money to fight development on the St. Alphonsus site as well as others.

In the end, the Grand Canal Park Group did not succeed in its mission. Hartz Mountain Industries, the company that purchased the lot from the archdiocese put forward plans to build a hotel, and hotels are as of right in the M1-5 zoning district that this part of SoHo is in. Community groups tried in vain to amend zoning regulations and to have the Landmarks Preservation Commission include the west side of West Broadway in the SoHo-Cast Iron Historic District. It was the scale of the building, 15 stories amid the surrounding five-story buildings that people most objected to, but also the additional traffic the hotel would create and the stress on the sewer system in an area not originally built for habitation.

The SoHo Grand Hotel, opened in 1996, was the first hotel to be built in the area now called SoHo in over 100 years, and only after 7 previous proposals had failed. It’s scale was indeed out of proportion to its neighbors, but over the past 22 years, the SoHo Grand has been integrated into the landscape of the “new” SoHo as new construction has gone up in surrounding lots,  including the SoHo Mews, just across the street at 311 West Broadway and The Dominick (formerly Trump SoHo) on Spring Street.

If anyone is wondering what ever happened to the displaced statue of St. Alphonsus, it now resides on Houston Street between Thompson and Sullivan in the church yard of St. Anthony of Padua, safe and sound.