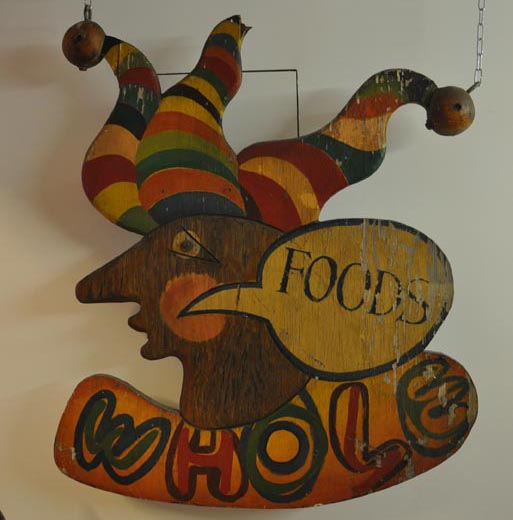 Food, Whole Foods, Dean and Deluca.  These three pioneering meccas of gastronomy, all less than a block from each other, had a major influence on how and what many of us eat today.
The restaurant Food (see my post on Food here) opened in late 1971 at 127 Prince Street at the corner of Wooster.  It was a place that employed struggling SoHo artists and  served inexpensive but hearty food to the local community, and it was, for a long time, one of the only places to eat in SoHo other than Fanelli's and a few greasy spoons.  It was also WAY ahead of its time in that it served fresh, seasonal foods cooked using local ingredients in an open kitchen.  This may be the norm these days, but back then it was virtually unheard of. The ORIGINAL Whole Foods, at 117 Prince Street between Greene and Wooster, was opened by Charles Rosenblum in 1970 and closed on April 1, 2000.  It was most certainly a "health food" store of the old school, a neighborhood store that was slightly odd-smelling and had slightly odd people (in a good way) working behind the counter, it was no Whole Foods Market or GNC, but it was the precursor to both.  One of the first health food supermarkets, rather than the usual hole in the wall that sold little more than brewers yeast and a few limp organic carrots, it was a vast (for that time anyway), well-stocked store with an extensive prepared food section and an even more extensive nutritional supplement section.  Whole foods as an industry was just starting to take off at that time so variety and choice were limited, but if it was out there, Whole Foods probably carried it, from whole grain bread loaves that weighed ten pounds each to rennetless cheeses to, of course, Tofutti.

Before Giorgio Deluca's THE CHEESE STORE, our choices were limited to white or yellow

And let's not forget Dean and Deluca.  In 1973, Giorgio DeLuca, son of an Italian food importer, opened The Cheese Store at 120 Prince Street, where he sold a wide selection of domestic and imported cheeses previously not readily available in the US, and then in 1977, DeLuca, along with two partners, Joel Dean and Jack Ceglic, went on to open Dean and DeLuca, the gourmet food superstore across the street and converted The Cheese Store into a sandwich shop.  DeLuca describes how he came to open his now world-famous store:

A lot of this was in reaction to the processed food that America was starting to live on,” DeLuca says.  “The Swanson’s TV dinners, the Tang, the fucking WisPride cheddar in a crock—Americans were losing their ability to taste.  I wanted to show that some things are better than others.  Americans are taught just the opposite: ‘Whatever makes you happy.  You like Coca-Cola and this guy likes fine Burgundies?  You can’t say one is better than the other!’  Can you imagine the absurdity of that?  But that’s the underlying philosophy that Americans are brainwashed into. (from David Kamp's The United States of Arugula: How We Became a Gourmet Nation, Broadway Books, 2006, page 201)

Nowadays, we take for granted that we can get meals made from fresh, local ingredients, or organic, gluten-free frozen waffles, or imported, unpasteurized, stinky cheeses pretty much whenever we want.  But before Food, Whole Foods, and Dean and DeLuca came along, we didn't even know that we wanted these things. But it is thanks (or NO THANKS! depending on your tastes) in large part to these pioneering food establishments (along with a few others, such as Zabar's and Balducci's) that we now have a President who is derided for his taste for arugula and lattes, and who has a wife who farms organic produce on the White House lawn.  I guess that's what we'd call "trickle-up foodonomics."