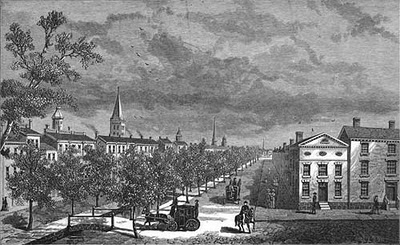 The Etymology of Street Names

One way we New Yorkers define ourselves is by where we live—in what neighborhood, on what street.  We’ve repeated our own addresses an untold number of times, yet we usually do not know for whom or for what the streets that make up our neighborhood are named. As I discovered during my research for this post, the etymology of street names reveals much about the history of the areas through which those streets run.

In the early 1800’s, Nicholas Bayard, once the largest landowner in Manhattan, cut a street through his land and named it after his son-in-law, William Houstoun, a congressman from Georgia, who, it is thought, pronounced his name house-ton, instead of hews-ton, like the city in Texas.   There is a Houston County in Georgia that is also pronounced house-ton.  At some point, the second “u” in Houstoun was dropped, but the pronunciation remained. Some have said that the name comes from the Dutch words huijs tuijn, meaning “house garden,” but this etymology is false.

Collect Pond was a fresh water pond located just southeast of the present-day corner of Broadway and Canal Street.  In the 1700’s, it was used for recreation as well as a reservoir, but as industries began dumping waste there, it became a toxic wasteland.  In 1807, the city widened a small spring that ran from the pond to the Hudson River to drain it and planted rows of trees along both sides of this new canal.  This path was known as Canal Street, even after it was paved over in 1821 because residents complained of its foul smell.

Until the mid-nineteenth century, West Broadway was called Lorenz Street, after a general in George Washington's army.  The street was nicknamed “rotten row” because it was lined with numerous brothels.  Briefly renamed South Fifth Avenue, it was re-renamed West Broadway in the 1870’s. In 1972, August Heckscher, the city's Parks, Recreation and Cultural Affairs Administrator, proposed that the stretch of West Broadway between Canal and Houston Streets be renamed "Jackson Pollock Place"  The proposal was not very popular amongst residents (read my post on the controversy surrounding this proposal here). The portion of West Broadway that is north of Houston was renamed La Guardia Place, after former New York City Mayor Fiorello H. LaGuardia, in 1967.

Originally a native American trail called Wickquasgeck that meandered through Manhattan, Broadway was made into a wide thoroughfare by the Dutch.  Before 1899 when the name “Broadway” became the official name for the entire road, it was known by different names in different parts of the island.  The name is a literal translation of breede weg (Dutch).

Lispenard's Meadow taken from the N.E. corner of the present Broadway & Spring St. (Drawn by A. Anderson, 1785 via Art NYC)

Spring Street was named for a spring that flowed in Lispenard's Meadow, which, along with Collect Pond (see “Canal Street” above), was used for recreation by early European settlers.  Spring Street was earlier known as Brannon Street, because it ran through the garden of a man of that name.

Collect Pond was located just southeast of the present-day corner of Broadway and Canal Street. (Image via The Bowery Boys)

Many of the other streets that run through SoHo, such as Mercer Street, Greene Street, and Prince Street, were named for Revolutionary War heroes whose legacies stretch beyond the borders of New York City.

So the next time you are wandering through the neighborhood, if you picture it as a seedy red light district, perhaps you will feel grateful that instead of brothels, we now have not one but TWO Camper stores along Prince Street.  But if you instead conjure an image of the bucolic expanse of Lispenard's Meadow, perhaps your yearning to run barefoot through grass will remind you that we could use a little more green space on SoHo and a little less Spanish footwear.