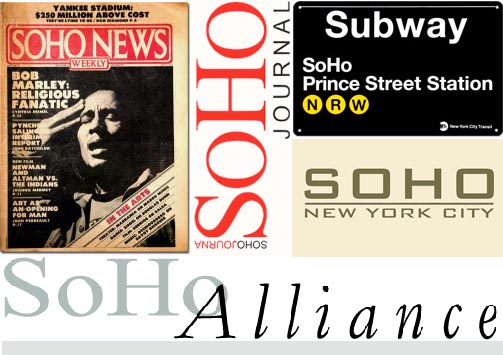 That Which We Call SoHo

What's in a name?

First there was SoHo (south of Houston), and then came Tribeca (triangle below Canal), Nolita (north of Little Italy), NoHo (north of Houston), DUMBO (down under the Manhattan Bridge Overpass, I think), and the really awful SoHa (south of Harlem).  And I'm sure there are many more.  But who started it all by coining the name SoHo?

In 1962, Chester Rapkin, the New York City Commissioner of Planning and urban planning theorist, published a report titled "The South Houston Industrial Area" (also known as the "Rapkin Study"). His 2001 obituary credits him with coming up with the name SoHo.  But I think a few other people have also been credited with the coinage

The area that is now SoHo was also once known as the Valley, because it is comprised of many low, five-story buildings with areas of tall skyscrapers to the south and north.   It was also known as Hell's Hundred Acres, a name given to the neighborhood by the fire department after several huge warehouse fires.  The Landmarks Preservation Commission called it the SoHo-Cast Iron Historic District when it designated the area an official historic district in 1973.  SoHo in New York is distinguished from Soho, the area in London, by the capital letter "H," indicating that it is a contraction of the words "South" and "Houston."

SoHo used to refer to "the other side of the tracks," where poor artists lurked in the shadows in fear of being evicted, where people from uptown went "slumming."  But now the name SoHo is used as an adjective to describe an aesthetic or a lifestyle that is glamorous and hip with a dash of bohemia mixed in, as in SoHo-style loft or SoHo chic.  The name SoHo has gone from describing an industrial wasteland  to the stomping grounds of the rich and fabulous.

That which we call SoHo is thus a reminder of where we came from as well as, for better or worse, a reminder of just how far we've come.