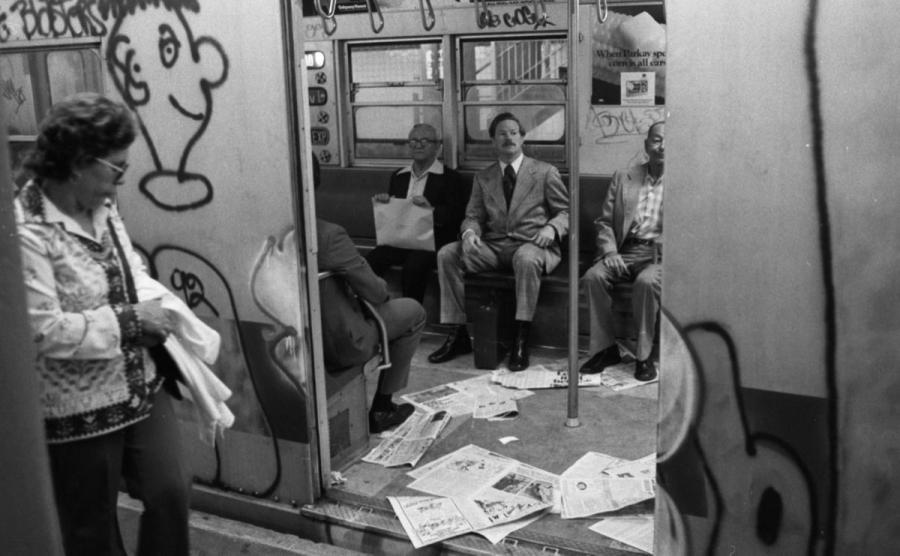 What a year it's been for The SoHo Memory Project! We’ve made so much progress toward preserving and sharing the history of SoHo during this first few months of programming. There has been a recent groundswell in interest in SoHo history, and I so appreciate everyone’s enthusiasm to come together to celebrate our neighborhood’s rich history. I will do my usual annual “recap and look forward” post next month, but wanted to first share my more general ideas about where we stand as a community today.

It seems to me that SoHo, and perhaps New York City in general, is at a tipping point. I have had the same discussion with a number of people lately about how our city is at a critical juncture. On the one had, there seems to be a lot of looking back, especially at the 1970s, going on (see Edmund White's NYT piece "Why Can’t We Stop Talking About New York in the Late 1970s?"). A nostalgia for a time that was, yes, dirty, dangerous, and dire, but also full of potential. Our fair city was on the brink of bankruptcy and was on the verge of complete chaos (remember the blackout of ’77?), but it was also a time pre-AIDS, pre-Bloomberg, pre-Superstore, pre-internet, when hardship bred true creativity and passion. A circumstance so bleak could have led to a contagion of apathy, but the opposite happened in SoHo, innovation, stemming from a place of pure hope, flourished.

What a stark contrast between that SoHo and the SoHo (and New York) of the present. If the 70s was a time when the world was ready to leave us all to crash and burn, this present decade has thus far been a time when developers and foreign interests have made New York soar and shine. It seems that investors cannot throw enough cash at us and just when you think development has reached its peak, yet another high rise or mega store peeks up over the skyline. A far cry from the days of “Ford to City: Drop Dead”. Here in SoHo, we have soaring real estate prices, a continued influx of luxury brands opening flagship stores, and large retail chains in search of ever-larger spaces to set up shop. The sparkle, or perhaps some would say glare, of these establishments have made all but invisible the other SoHo, the SoHo that emerged back when all was darkness and doom (see my post Is there art in SoHo?).

So what next? We are at a (critical!) juncture in SoHo, where our neighborhood has all but lost its creative soul while it has gained oodles of commercial vitality. How does SoHo celebrate what remains of its past while bolstering the new? How does it remain relevant and not become too vanilla, just one of many successful American commercial hubs?

The brands that inhabit the ground-floor commercial spaces on our main thoroughfares and side streets are brands that can be found in many commercial districts in many American cities. This is what people refer to as the "mallification" (or mollification?) of SoHo. In addition, many in the media claim that only a negligible number of artists remain in SoHo. I beg to differ. It is certainly true that SoHo is way past its heyday as an artists community, but the arts still thrive in SoHo, albeit quietly.

Installation view of "Matt Mullican: A Drawing Translates the Way of Thinking" at The Drawing Center, New York, 2009

Most visitors have no idea that non-commercial arts venues, gems such as the Drawing Center and The Dia Art Foundation, are where they've always been since they were founded in 1970s. They have been obscured by the overwhelming presence of your Tiffany and Co.’s and Uniqlos. Yet it is the existence of these institutions, this rich history of creative foment and inspiration, is what makes SoHo different from your average shopping mall, not to mention what made these retailers want to set up show here in the first place.

In addition, SoHo's cast iron facades, thankfully preserved and protected, are a reminder of a history that stretches back way past the days of illegal living for the sake of one’s art to an era of thriving industry. They point to a rich, layered past that sets this this neighborhood apart from Chicago’s Magnificent Mile or Rodeo Drive in Beverly Hills (and our own Madison Avenue), and it would be beneficial to our current commercial tenants to embrace this history, if only to boost their own image and desirability.

Because lets face it, SoHo is a “shopping mall” and there’s no going back or halting its progress. It is what it is, good or bad, but that does not mean that moving forward we cannot find a way to integrate the old with the new to give visitors a fuller experience of our neighborhood. This means, then, that we must work with big retail, not against it. Some may find this a sacrilege, but I say it’s just plain practical. Don’t get me wrong--- I am most grateful for organizations such as the SoHo Alliance, The Greenwich Village Society for Historic Preservation, and #SaveNYC. I wholeheartedly support them to continue their important and necessary work. I see The SoHo Memory Project, however, inhabiting its own, separate space in the preservation vs. development debate, a neutral zone where neighbors can work together toward celebrating their neighborhood—the old, the new, and the yet to come.

One of my main goals moving forward into 2016 and beyond will be to think about how The SoHo Memory Project can create mutually beneficial programming that will bring past and present together to create a future for SoHo that will leverage what makes SoHo unique to benefit all members of our community. To do this, we must devise strategies that leverage the power of our successful commercial district to serve our community's arts culture while driving a broader agenda for change, growth and transformation in a way that also builds character and quality of place. In other words, we need to find ways for art and commerce to work together to create win-win situations where the missions of all involved are fulfilled.

I admit that this is no easy task, but one worth tackling, as this agenda reaches beyond the professional for me. I am raising my daughter here in SoHo. She is a third generation SoHo kid. I want her to know where she came from and where her mother and grandmother came from. I also want her to be proud of where she is 25 years in the future. SoHo’s history as a neighborhood is integral to the larger history of New York City, not to mention art, fashion, architecture, and food, yet most people who visit SoHo have no idea how we got from there to here. It is my hope that, if we preserve SoHo’s past, present generations will appreciate our neighborhood’s rich history, and this understanding will influence how we all shape its future.