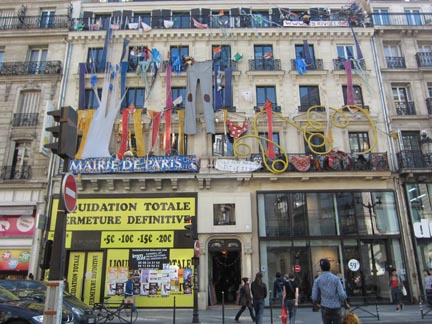 "SoHo" on the Seine

An artist's studio at 59 Rivoli

I recently spent some time in Paris visiting with my French step-daughter, so needless to say, with two kids in tow, I did not have very much time to wander aimlessly through the City of Light.  I wondered, however, if I could find anything related to SoHo about which to write, and I asked several Parisians where I might look.  Someone suggested a cooperative artists' "aftersquat" called 59 Rivoli, so I paid them a visit. Did I find a SoHo memory?  Quite the opposite.  I found the anti-SoHo. Instead of a clandestine cluster of artists working behind closed doors, I found a state-sanctioned and subsidized Bohemia on display.  I could understand, however, why my friend thought it might remind me of the old SoHo.  There was a palpable sense of community, of a group of creative people who all demonstrated a desire to express themselves.  But that was where the similarities ended.

59 Rivoli was founded on, well, the rue de Rivoli, on probably the most commercial and touristy stretch of street in Paris (think the corner of 34th Street and 6th Avenue) in of all places, a former bank building.  The building was illegally taken over by squatters in need of studio space in 1999 after it had stood empty for almost ten years.  Painters and sculptors broke in through the back windows and quietly set up shop, until the building, once owned by Crédit Lyonnais, was purchased by the city, and, as promised by Mayor Bertrand Delanoe, was designated to be used for the arts. According to a New York Times article about 59 Rivoli and other similar artists' squats in Paris:

In 2006, as part of a citywide effort to legitimize popular but technically illegal art venues, the space was bought, closed and renovated by the Paris city hall for 10 million euros (about $12.1 million). It reopened in September 2009, and today serves as studio space for 32 resident artists. All over town, similar spaces are being bought and renovated to comply with safety regulations. After that, a specially tailored agreement designed by the city allows selected squatters to stay in exchange for a minimal rent — as low as 1 euro a day — and the promise of continuous work that the public can access.

The the six-story, mid-19th-century Haussmann era building's facade is decorated with colorful streamers and ribbons.  Passersby cautiously peek in through the open door where they are warmly welcomed by a resident artist on door duty (one of the obligations of being part of the cooperative).  It is open every day except Monday like any other Parisian gallery or museum, and the public is allowed free access to all of the studios.  Anyone can wander in and watch the artists at work as well as view and purchase their pieces. In addition to rows of blank and finished canvases and three dimensional works in various phases of completion, one can see evidence of everyday life lived in these rooms.  Makeshift kitchens with hotpots, hotplates, and hot water heaters are squeezed in alcoves perhaps once used to house filing cabinets or safes.  Paint-covered shoes and overalls are conspicuously draped over rickety chairs creating a tableau of creative activity. And this was what struck me the most as I toured the building.  That the whole scene seemed composed, as if it were a stage set or a still life depicting creativity in a charming though somewhat cliché and heavyhanded way.  As a matter of fact, I was so wound up thinking about the building as a concept that I almost forgot to look at the work being produced.  For me, the work was the whole, and the artists and art were merely elements.  I almost felt as though I were seeing something I was not supposed to see.  It was so unlike in the SoHo of my childhood where artists hid behind blackout curtains in fear of being discovered.  At 59 Rivoli everything was out in the open. Herein lies the fundamental difference between New York and Paris when it comes to being a working artist.  In New York City, in the 1970's and now, the arts have always been undervalued and underfunded by the municipal, state, and federal governments, making them not a right, but spoils of hard-fought wars.  In Paris, it is a given that the state lends its support to the arts, but because artists are subsidized, they must give back by opening themselves up to public scrutiny.  In order to work, the artists at 59 Rivoli and similar venues must play the game by putting on a "play" and they thus become performers, whether or not this is their intent.  It seems inevitable that creating art in a panopticon would influence one's output.  An artist must be on his best behavior because who knows who's watching, who will walk through the door? So to bring this all back to SoHo, there is no doubt that the arts in New York and throughout the US need more funding and support, and if Mayor Delanoe had been mayor of New York, perhaps artists would still be able to afford to live and work SoHo, ...but at what cost?

The facade of 59 Rivoli in Paris

An artist at work in her studio