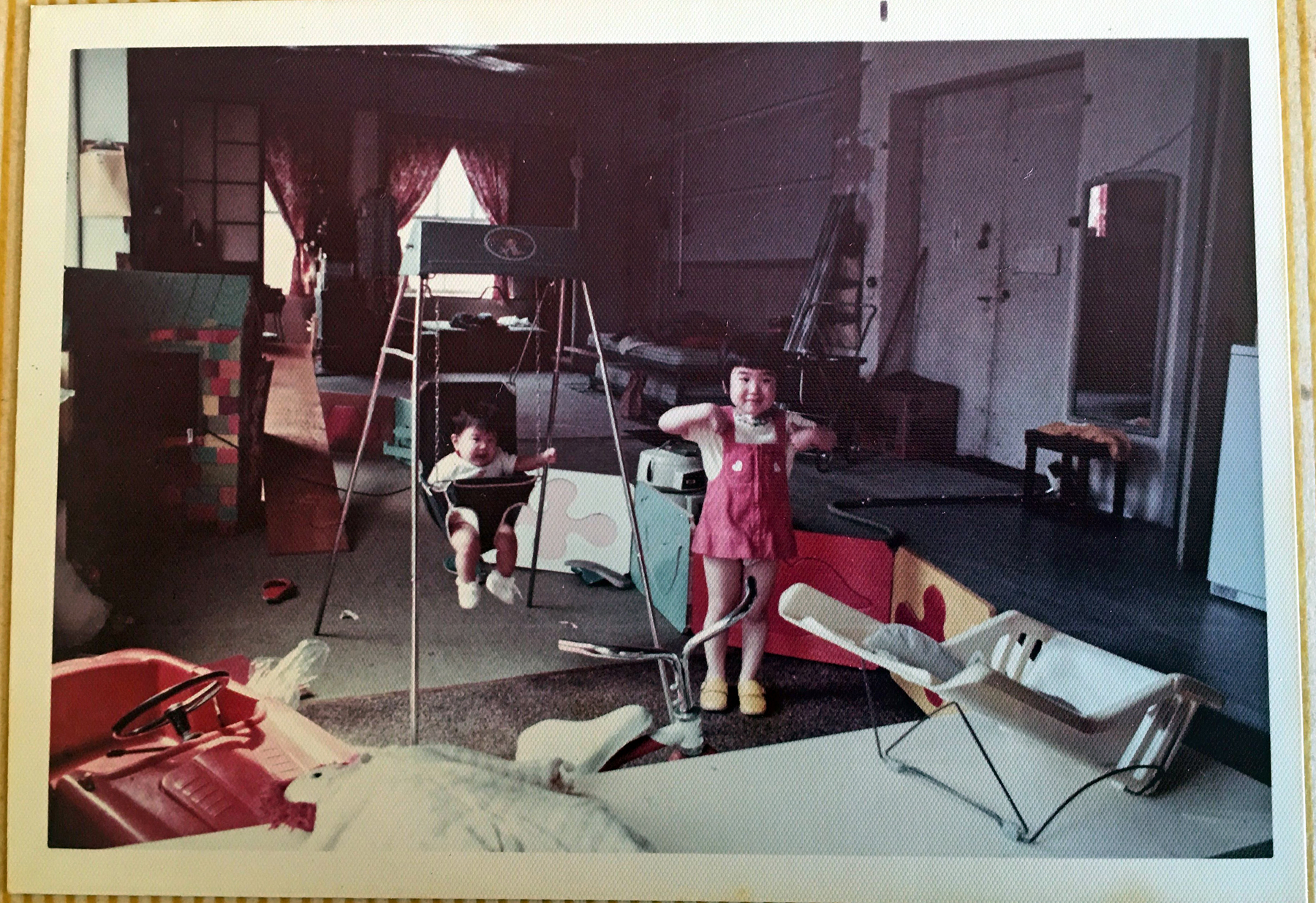 It’s been quite a while since I did a straight-up SoHo memory post. This past year I covered a SoHo artist’s coming of age, SoHo zoning, SoHo in YA literature, and a proposed SoHo museum. So I thought it would be nice to end the year by going back to our roots with a compilation of SoHo memories from readers and from yours truly. In the photo above, my sister and I play in front of the freight elevator in our very messy loft. Read on for my memories of the elevator, along with remembrances of SoHo from friends and family.

Enjoy, and see you in 2020 when we will celebrate 10 years of SoHo Memory Project and a permanent home for our archive at the New-York Historical Society Library!

Yukie on her freight elevator:

When we lived on Crosby Street, we had an elevator operator name Sally (a man), who, as far as my parents could tell, was being given life-time employment from our landlords in Little Italy.  Extrapolate what you wish from that information.  Anyway, Sally had a little room on the first floor under the staircase (what I picture Harry Potter's cupboard under the stairs to look like at the Dursleys) where he had a small space heater and listened to the radio from nine to five and would come to pick us up on the fifth floor if we rang for him.  This was a nice perk I suppose, but after five o'clock, if people wanted to use the elevator, they would have to ring for it and the people who had it on their floor would have to go pick up whoever rang and then be dropped off back on their floor.  It was very a complicated hand-off system and required that you get along well with your neighbors.  If you came home after hours, you would have to walk up the stairs unless you wanted to wake your neighbors up.  And that was no small task—with fourteen-foot ceilings, if you lived on the fifth floor, that was a lot of stairs.  I used to have nightmares about that elevator.  I dreamed that it would descend uncontrollably deeper and deeper under our building and nothing I did could stop it.  I always woke up before it hit bottom.

Gail on cheesecake and the barter system at Fanelli’s:

The RK bakery [on Prince and Wooster] had these huge cheesecakes. I would go to the bar to pick one up. I swear it was bigger than me. We usually got one when some bakery worker was low on cash and needed to pay his bar tab. The same with underwear and pajamas. I was well into my twenties before I bought either at a store. The barter system was alive and well at Fanelli's. Rest in peace Grandpa, Daddy, Uncle George and Uncle Jimmy. Always in my heart.

Jody on the leather shops on Spring Street:

In the late 60’s, when I was in junior high school we used to come from Queens to Spring Street to pick up leather remnants to patch our jeans. These stores on Spring were stacked floor to ceiling w/manufactured piece goods, being sold by the bundle by grumpy old men who somehow seemed older than their shops - shops that looked like they were there forever. In retrospect, to these men we probably represented a foreign-like, young, unfathomable to understand hippy breed.

Fusako on living in a hideout:

We were living illegally in an 1860 loft building on Crosby Street.  Snow would fly into our house through the window frames so we had to cover them with plastic sheets. My daughters got many splinters from the old wood flooring that we finally had to put down carpets.  At first, we had a coal burning stove for heat but eventually replaced it with an electric fan heater. Little by little, we modernized out home, yet we so enjoyed living this unconventional lifestyle.  It was like living in a hideout.  We kept the windows very dirty so no one would know we were living there.  There was no intercom.  When a visitor came, we threw the key out the window in an old sock.  Although we ourselves were newly arrived in New York City, we became known as the veteran old-timers to the even more newly arrived, and our loft became a meeting place for young Japanese expats hungry for home cooking.

I miss walking home at the end of the day and all the treasures on the street - bubble paper, empty cardboard fabric tubes or rolls, pieces of fabric for arts and crafts. Garbage to others but treasure to me. My brother and I would select the best cardboard tubes and have epic sword fighting battles as we meandered down Thompson St., our mom enjoying our interest in free toys.

Sharon on her walkabouts:

I was 18 and new to New York City in 1971, and felt like such an adventuress as I dipped below Houston Street in my constant walkabouts. SoHo offered an alternative universe to not just my suburban hometown, but also the rest of the city. I was a sponge, absorbing the wondrous, lonely strangeness of the terrain, with the feeling that anything could incongruously appear on the streets, the fire escapes, even from the dumpsters that were parked outside the factory buildings. All of my creative senses were activated and rewarded. Consumerism had not yet reared its head to gobble up what was, to me, magical.

Bethsheba on a time capsule of her own:

Andy Warhol was collecting items for his time capsules during this time. I remember my father took a photo of me at our kitchen table with his paintings in the background.  I have no idea if the photo ever made it into one of his famous time capsules boxes.  But I remember how excited my father was when taking the photographs and just being a part of the artistic community that was transforming the dark forgotten spaces that made up SoHo.  I have always loved the time capsule idea and after recently poring over several old boxes of items I re-discovered inadvertently, I realized that I have my own time capsule.  … My time capsule items are parts and pieces of the working artists that we encountered and that made my childhood home such a magical and creative place to live.

Janet on scavenging for fabric scraps:

I miss the emptiness of SoHo—that almost deserted electricity that ran through the streets, unseen yet palpable.  I can sometimes capture the feeling on Wooster, Greene, and Mercer Streets (but only south of Grand and north of Canal Streets).  Those blocks still carry the essence of the SoHo of my youth.

I also miss the industry portion of SoHo.  As I kid, I owned Flip and Fold Fashions, which came with accessories and about five squares of fabric.  At about 6:00pm or so each night, I would comb the blocks (Prince between Mercer and Broadway was always the most abundant) and collect scraps of fabric that were dumped by the factory workers at the end of the workday.  Before long, I had hundreds of pieces for my Flip and Fold Fashions set!