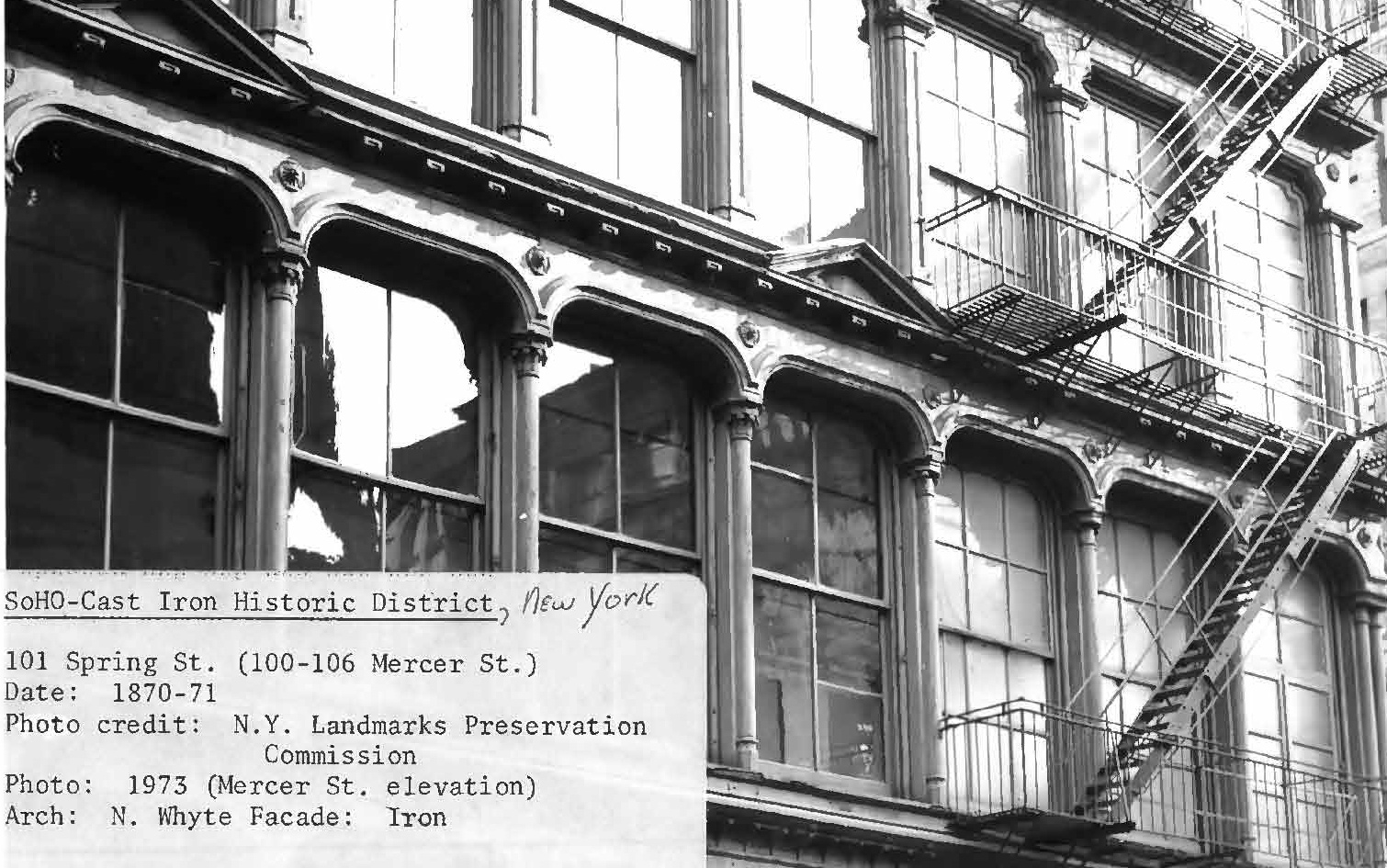 If you walk by the corner of Mercer and Spring Streets these days, you will see a building shrouded in (soon to be removed) scaffolding and netting. 101 Spring Street, the former residence and studio of artist Donald Judd, is currently being restored by The Donald Judd Foundation.  The only single-use cast iron building left in SoHo, it is slated to reopen in 2013 as a "museum" that presents the building as it was when it was new and the interior, including the furnishings and works of art it houses, as it was when Judd lived and worked there.  As William Hamilton writes in his New York Times article about the restoration project, “101 Spring Street will have accomplished a rare feat: a restoration that honors both the building's history and an artist's legacy, from two points in time 100 years apart.”

The Judd Foundation is, in essence, creating the physical embodiment of what The SoHo Memory Project hopes to accomplish through this blog.  The 101 Spring Street museum will be the trace that was left by a bygone group of people in a bygone era, whose ethos will be present in what is preserved there.  As far as I know, it will be the only comprehensive physical proof of how we lived, worked, and played back then, and as such, it will be like an archaeological dig that uncovers a lost civilization.  As Carl Swanson writes in 2009 in Departures:

For the most part, the building will be preserved like a pharaoh’s tomb. Everything will remain untouched, including the fifth-floor bedroom, where Judd slept on a platform bed he designed himself and the entire west wall—some 65 feet—is lined by a colonnade of overlapping squares of fluorescent tubes, buzzing electric red and blue. It’s a work by Dan Flavin dedicated to Judd’s son, profound and perfect—a memory as well as an eternal intention, like the rest of the house.

My only memory of being in the building back then comes mostly from a story my mom told me.  I was at a playdate with Flavin, Donald Judd and Julie Finch’s son, one day.  I drank too much Strawberry Quik (any amount of Strawberry Quik is too much, in my opinion) and proceeded to throw up pink all over the place.  Flavin’s nanny called my mom in a panic and told her to come pick me up immediately, alarmed by the copious quantity of my vomit.  I guess the playdate ended shortly thereafter.  Not the most dignified memory, but perhaps worth recording, merely for its gross-out factor.  Jay at the Mercer Garage told me once that his father, Calman, and his uncle, Morris, used to work in the Judd building back when it was an embroidery shop, before they bought the garage.  The building thus has a rich history that goes way back before Donald Judd purchased it, but the moment in time that the Foundation will preserve will be 1970’s SoHo.

In 1989, Donald Judd wrote an essay entitled “101 Spring Street,” where he recalls his vision for the building when he moved in:

I thought the building should be repaired and basically not changed. It is a 19th century building. It was pretty certain that each floor had been open, since there were no signs of original walls, which determined that each floor should have one purpose: sleeping, eating, working. The given circumstances were very simple: the floors must be open; the right angle of windows on each floor must not be interrupted; and any changes must be compatible. My requirements were that the building be useful for living and working and more importantly, more definitely, be a space in which to install work of mine and of others. …

I look forward to visiting the building when it reopens next year.  I wonder how it will feel to physically enter a memory, my own merged with that of the larger community.  And it will be fascinating to see how Judd’s vision, carried forward by the foundation that bears his name, will be preserved.