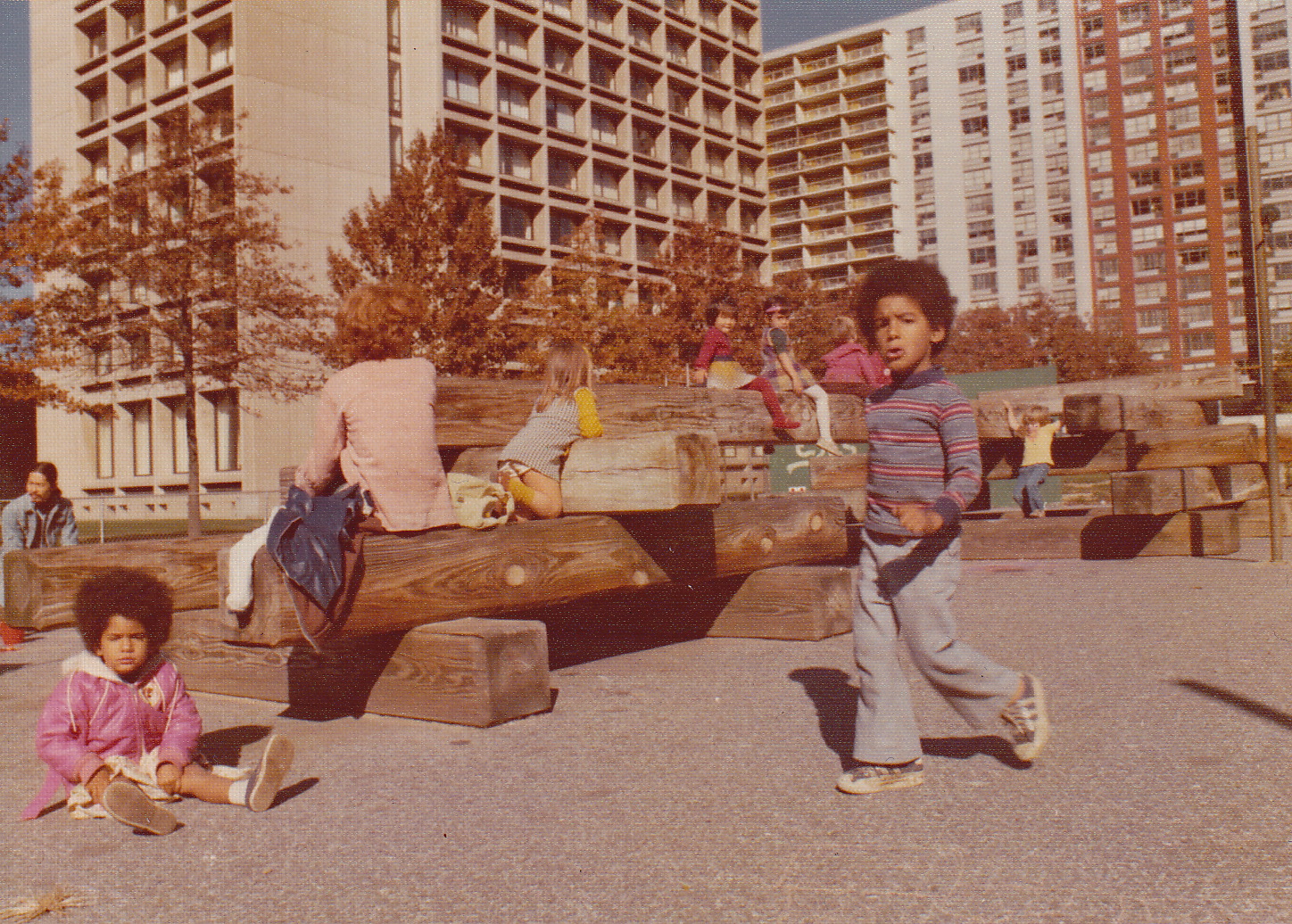 Before downtown playgrounds became overcrowded, superstar architect-designed, paparazzi magnets, we had the NYU playground (I don't know if it had an official name). It was located on the plot of land where the NYU Coles Sports and Recreation Center now sits, just east of the Silver Towers. There was a dirt baseball field, (supposedly) a basketball court that I do not remember, and a large paved area with a slide, jungle gym, maybe a few other climbing apparatuses, and a huge wooden structure made of enormous pieces of semi-rotten wood that smelled funny when it rained and gave you splinters every time you touched it.  Later, a dog run was added on the southeast end of the lot, and a good one-third to half of it toward the Bleecker Street side was a softball field overgrown with weeds.

The playground was so vast that children could basically play off on their own unnoticed for quite a while.  I remember once hanging upside down from a bar and then falling straight down on the top of my head (see my sister standing on said bar in the photo below).  I lay on the ground, dazed and confused, for what seemed to be quite a while, and when no one came over to see how I was, I eventually just got up and staggered back to my friends.  My mother told me that before the dog run was put in, she used to bring children from the SoHo Playgroup to the patch of dirt on the corner of Mercer and Houston to dig for worms.  During the summer we would all cool off under the sprinkler, which was basically just a shower head coming out of the fence.  There were no trees in the park, so summers were brutal, but who cares when you're five years old!

In the late-70's, NYU announced plans to build a sports complex on the playground site, causing an uproar in the community.  Sean from the SoHo Alliance posted a comment a few days back about the issues surrounding the building of the Jerome S. Coles Sports and Recreation Center, which opened in 1981:

As part of the deal to build Coles (NYU needed special zoning permits), NYU promised the community use of a playground on top of Coles (as well as use of the gym itself).  NYU built the playground on the roof, and you can see the equipment on the Houston Street side, but provided no stairs to enable the public to access it, except by entering Coles – which is generally off-limits to the public. Catch-22 anyone?  NYU also had built a smaller sandlot playground inside the I.M. Pei towers, at Greene and Houston. It was primarily for use by its tenants in the towers, but NYU closed it about ten years ago.. . .Finally, although NYU promised adults in the community use of Coles, admission hours are so restricted as to be useless as a regular gym, being accessible only a few hours on the weekend.

But after all was said and done, The Coles Center was built, we lost our playground, and NYU never followed through on their promises. Nowadays, due to the astronomical rise in the number of children being raised in SoHo, our area playgrounds are often overcrowded.  They are also safer—my daughter will not be falling on her head unnoticed or getting any splinters!  And my family is lucky enough to have a community key to the gated NYU Key Park in Washington Square Village, for exclusive use of NYU and a limited number of community (non-NYU) families.  I must admit that I feel entitled to the key, as a small compensation for NYU's unfulfilled past promises.  The Key Park is a wonderland of colorful chutes and ladders, swings, a sandbox, and oodles of toys. Yet I still miss the Wild West ruggedness of the old playground, splinters, weeds, worms, and all.