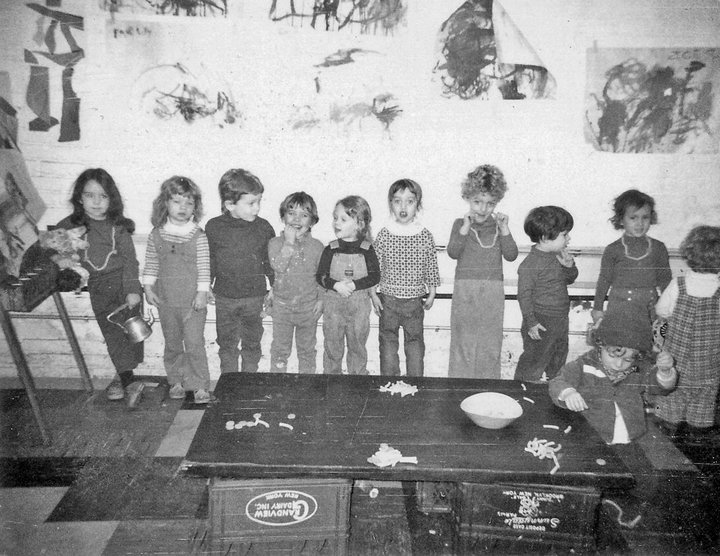 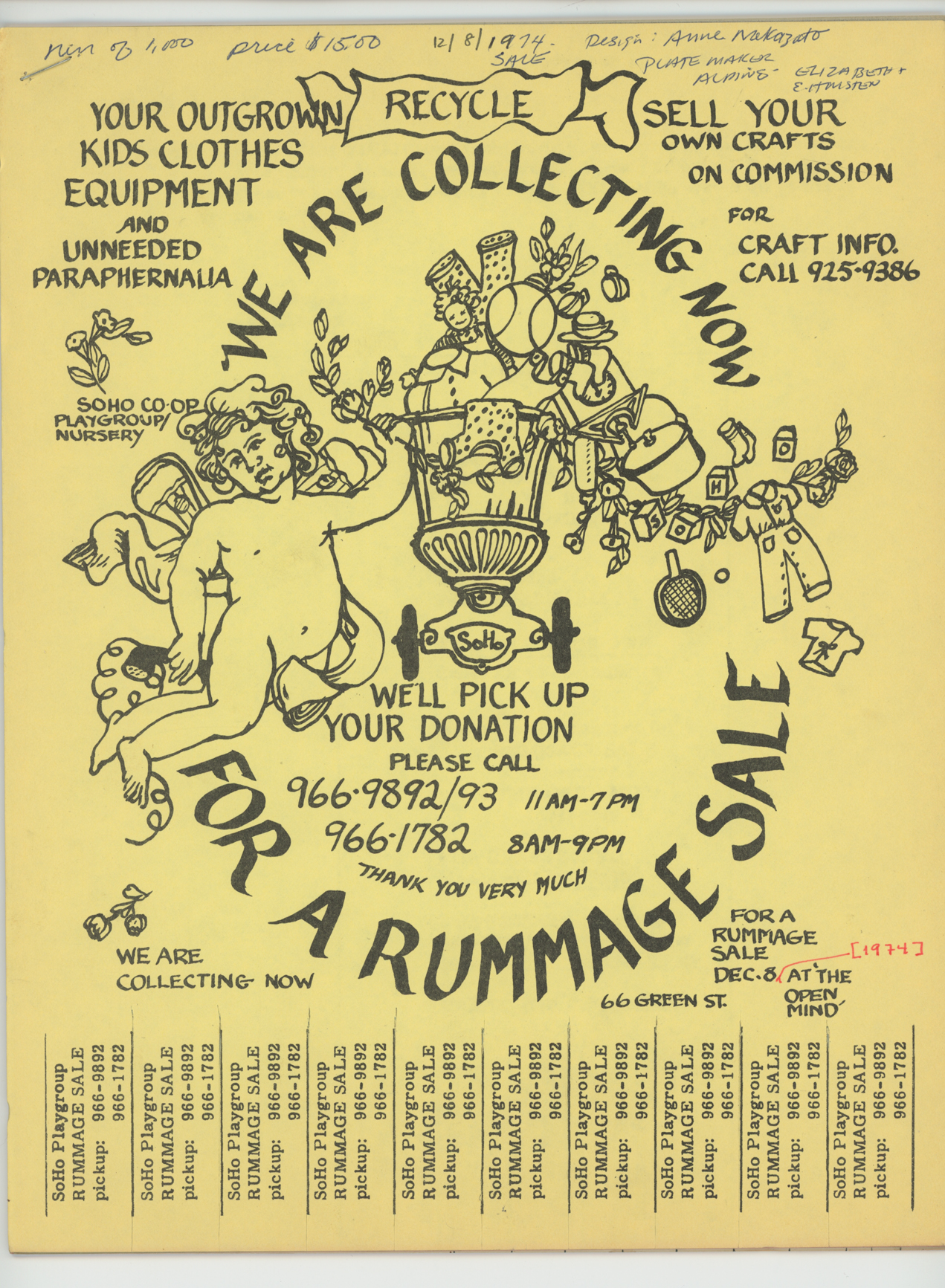 In honor of the SoHo Playgroup Reunion taking place this month, I am posting about SoHo's unique preschool. Our second such reunion, the "kids," now around 50 years old, and their parents, most of whom are into their 70's, will be getting together to have a potluck lunch full of reminiscing and catching up. Can you believe it? These are folks that I went to preschool with 45 years ago!

The SoHo Playgroup gang in the playground on Houston Street (photo: Mimi Smith)

I met most of my old-time SoHo friends at the SoHo Playgroup, which was started by neighborhood mothers as a series of playdates in various homes and at Thompson Street Playground (now called Vesuvio Playground) around 1970.  After that, for a time they met at the Children’s Aid Society until two local building owners, Charles and Fritz, donated a basement space on the corner of Prince and Wooster (under the restaurant FOOD, now the site of LuluLemon Men).  The Playgroup parents cleaned out the basement, put down tiles, and painted the walls. Once the Playgroup moved into its own space, it became a bit more structured and organized.  Cynthia, a teacher, was hired for $50 cash per week and the parents paid $20 per child per week and were required to “work” one day per week.  The Playgroup operated weekday mornings, and each morning a group of three parents would help Cynthia look after the fifteen children, thus giving the children a fun place to play and socialize while the other parents had some free time.  An “after-school” program was also set up where groups of five children each would visit a rotating list of lofts to play during the afternoon hours.

I attended the SoHo Playgroup from 1972, around when it opened in the Prince Street space, until I was old enough to enter kindergarten at P.S.3 in 1974 (no such thing as pre-K back then!).  My sister also attended, from around 1974-1977.  Cynthia was the teacher there the entire time we attended.  I was pretty young, so I don’t have that many distinct memories of the Playgroup.  I do remember Cynthia as a wonderful, compassionate teacher and friend. I also remember that, since we were in the basement, we would have floods every once in a while.  The children would all have to stand up against the wall while the parents tried to clean away the water and dry out our “rugs.”  The playgroup space had moving blankets on the floor, and for the longest time, whenever I saw anyone moving, I always wondered why they covered all their furniture with rugs.

I also remember Havarti cheese.  The parents of the day would be responsible for bringing in the snack of the day, and often it was purchased at THE CHEESE STORE, Giorgio DeLuca’s cheese shop at 120 Prince Street (now the site of Olive’s).  Giorgio DeLuca, along with two partners, went on to open Dean and DeLuca, the gourmet food store, across the street (now the site of Club Monaco).  My mother, who was pretty new to New York and the U.S., didn’t know what to buy, and one day she saw that another mom had brought in Havarti cheese, so she bought that too from then on.  I ate A LOT of Havarti cheese back in those days. SoHo Playgroup was such as wonderful and special place to come into the world.  Mostly, but not all, children of artists, we were encouraged to discover and explore our inherent creativity.  Thank you, SoHo moms, for creating such as nurturing environment for us to grow up in! If you attended SoHo Playgroup and wish to attend the reunion, please email me offline at yukie@sohomemory.org.