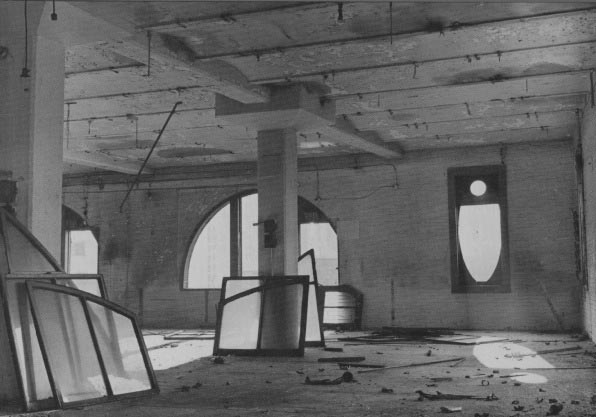 Patience and Fortitude (and Resilience and Attitude)

I was looking through old issues of The SoHo Weekly News recently and came across a column by Jim Stratton that I thought beautifully summed up what it took to be a loft owner in SoHo in 1975.

Right now it is covered with packing cases or sewing machines or rag bales, but it has real potential. You think the floors are good—at least if you scratch through the century of grunge you find a layer of what appears to be wood underneath. And the enthusiastic person with the list particulars says it will all be easy. Sign here, and leave your cash with the lawyer.

Learning the difference between real potential and realty reality is a long, slow process.  Renovating a squat warehouse into a liveable cooperative is a grand adventure which can be every bit as exciting as Mission Impossible…if you are ready for it.  Being ready means that the adventurer must be prepared to watch all those dreams self-destruct at any moment, and be set to resurrect them again from the ashes.

Nearly every cooperative of my acquaintance has had some gantlet to run on its way to stability.  In one, a fire (uninsured) destroyed the plumbing before anyone got to flush.  In another, a recalcitrant and not too-cooperative cooperator keeps taking the builder to court.  A third felt the wrath of a former tenant in the building and faced legions of inspectors…building, plumbing, electrical, elevator, fire, even the Board of Health sent their finest.  There is no way to gauge in advance the nature of the calamity that will befall, but setting your mind to expect it and meet it is an unadvertised but necessary part of your commitment if you get into a co-op.

Different buildings have met different challenges according to their own strategies.  Six years ago, my own homestead was rankled by a difficult situation: the rag merchants who had sold us the building refused to move out.  A codicil on our purchase contract generously gave them “reasonable” time to evacuate their bales, but because they were teetering on the brink of bankruptcy they couldn’t find space anywhere that suited their pocketbooks.  So they stayed on…and on…and on.

Rolling 500-pound ragbales around soon became tedious.  Erecting walls between the bundles quickly paled as an art form.  Something had to be done.

What was done was sandblasting.  We hired a crew and they started on the top floor.  As the fallout began sifting through ancient floorboards into the folds of the rags, those bales magically found new places to go.  Fifth floor, fourth floor, and right out the door ahead of a jet stream, of sand.

The remedy suited the problem and it worked.  If it had not, I have no doubt that I would still be climbing over a batch of orlon to make coffee.

Nearly all cooperative disasters can be reduced to one absolute.  Money.  Replacing a plumbing stack takes money, going to court takes money, meeting sometimes-obsolete city requirements takes money.  My own corollary to Parkinson’s Law is the cost of renovation expands to spend all money available, whether it is earmarked for renovation or not.

This appears to be true whatever the level of the original bank account.  In one co-op where the owners bought their floors for $3,000 apiece and no one in the building had much more than the down payment, work is progressing in spite of poverty.  The co-opers are all just barely scraping by.  In another, where raw space was $25,000 and the purchasers thought they were easily able to afford it, one add-on cost after another sapped their individual bank balances to a uniform cipher.  They too are just scraping by…though admittedly in fancier style.

Adversity, like it or not, is usually a part of the cooperative adventure.  It can be expected, welcomed and even relished if you set your mind to it.  Setbacks are frequent and pain is a certainty.  Auden might have been renovating a loft when he wrote:

They will come all right, don’t worry; probably in a form That we do not expect, and certainly with a force More dreadful than we can imagine.  In the meantime There are bills to be paid, machines to keep in repair, Irregular verbs to learn, the Time Being to redeem From insignificance.

There can be beauty in a leaky roof and a bruised thumb, but unless it is in the eye of the beholder, the beholder shouldn’t renovate a loft.

This column appeared Thursday, January 9, 1975, in The SoHo Weekly News.  Click on image to enlarge:

An on-camera news reporter (United Press Newsfilm, UPITN) for a dozen years, spent two Army years in New Orleans where he joined in opening the still-wonderful Maple Leaf bar while writing, in New York City, the column “Keeping Aloft” in the now-iconic SoHo Weekly News. Former co-owner of Puffy’s Tavern and continuing co-owner and General Manager of Grassroots Tavern, he also writes a column, “The City Charrette,” for the Tribeca Trib. A founder of the Downtown Independent Democrats, Lower Manhattan’s political reform club,  he was for 18 years a Democratic District Leader and member of the Democratic New York County Executive Committee. A former chair of Community Board #1 in Lower Manhattan and past president of the SoHo Alliance and P.S. 234 Parents Association. Author of the 1977 book “Pioneering in the Urban Wilderness,” a historical, personal, and informational tour de force on the artist-loft movement of which he was a part.

And he did all this without much intending to.