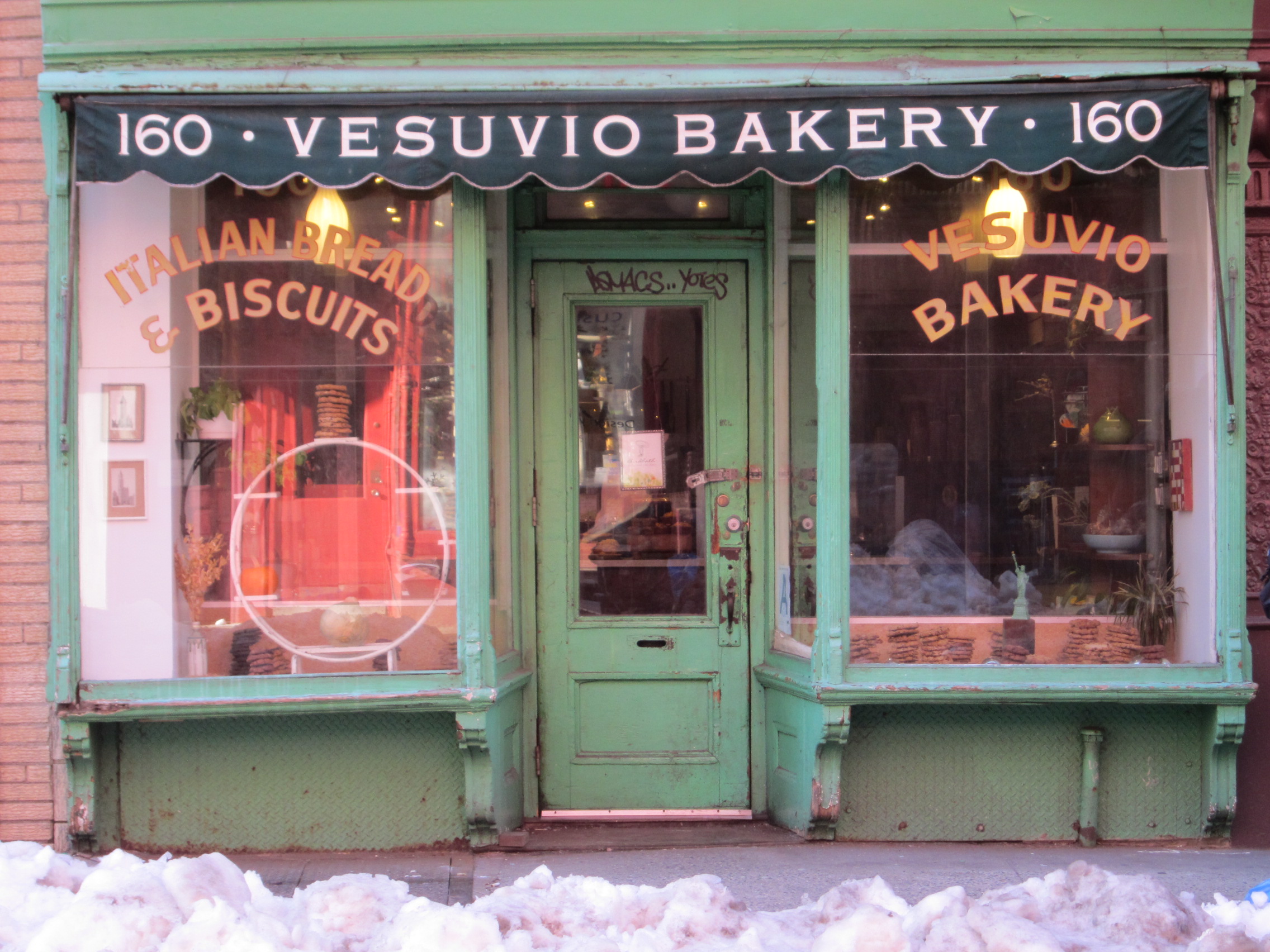 The Birdbath Cafe looks an awful lot like the Vesuvio Bakery

I'm not sure how I feel about people (or companies) usurping collective memory for their own purposes, for either monetary profit or as cultural capital.

Some examples of this would be Birdbath using the famous, much photographed facade of Vesuvio Bakery, unaltered, as the facade for their new (ish) cafe.  Or, and this one's a bit more obscure, the new clothing and shoe store at 72 Greene Street naming itself "The King of Greene Street," a reference to the fact that architectural historians consider this building's facade to be the finest example of  French Renaissance and Second Empire style in SoHo.  Or the glaringly obvious example, Daniel Boulud naming his new "downscale" restaurant on the Bowery DBGB (Daniel Boulud Good Burger) after CBGB, the music club that used to be down the street.  Or for that matter, John Varvatos taking over the old CBGB space and preserving a wall of flyers as part of his store's decor.

Is this nostalgia?  Homage?  Cashing in on history and memory?

In the case of Birdbath, opened by Maury Rubin of City Bakery in late-2009, the old Vesuvio facade was really not altered at all.  There's a little sign in a picture frame hanging in the door that says "Birdbath," but otherwise, one would think that the store's name is "Vesuvio Bakery," which is written on the awning and across the plate-glass window.  Opened in 1920, Vesuvio's storefront has long been a landmark in SoHo.  They had medi-okay bread at good prices and Anthony Dapolito, the last owner of the bakery, was a very nice man who once commented to me as I was buying bread to bring to school that I must be very smart because I went to Stuyvesant (if he only knew...).  I only have fond memories of the old Vesuvio and am ambivalent about the fact that it is no longer what it was but looks exactly the same.  Am I apt to go in there merely due to my nostalgia?  I guess I'm just relieved that they didn't replace it with the generic facade of a chain store.

As for The King of Greene Street, I think that reference is so recherché that it's kind of interesting.  They couldn't have named it that to sell more dresses.  I don't think most purchasers of said dresses would care if the actual king of Greene Street were a building or a person or a bed and I dare say that most of them do not know.

In the interest of full disclosure, I have eaten burgers at DBGB and think they are quite good (though I still think the burgers at Fanelli's are better).  But the name DBGB makes me laugh.  The idea that there could be any connection whatsoever between brunch at Chef Boulud's restaurant and the hardcore matinees of my youth is just comical.  DB flatters himself if he thinks he has even a soupcon of the downscale-ness that CB's had (remember those bathrooms???).  All I can say is DISCONNECT!, but perhaps it works as a marketing tool to woo those whose nostalgia for CBGB is informed not by actual memory but  by John Varvatos and his shrine to scruffy musicians of years past (who could not afford to buy shoelaces, much less shoes) in his flagship store.

But now I'm sounding bitter.  I'm not, really.  I'm actually flattered on behalf of places past that others that came later want to pay tribute to them.  I like the idea of bringing a part of the past into the present.  It reflects the course of healthy evolution.  It's just that when the memories evoked are so precious yet fleeting, I begin to feel protective of them. All nostalgia is bittersweet, or, as Lou Reed once said, "I don't like nostalgia, unless it's mine."