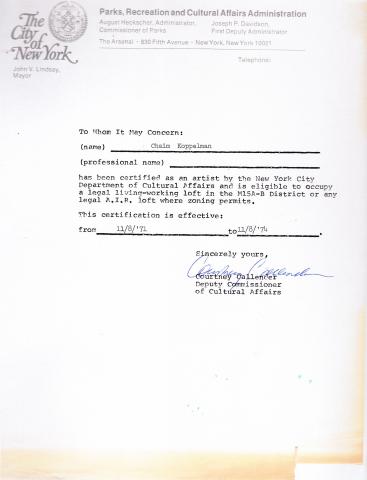 On January 20, 1971, the City Planning Commission voted 4 to 0 to recommend to the Board of Estimate that artists be permitted to reside in the manufacturing buildings of SoHo.  On January 28, the Board of Estimate made that recommendation law.  This law was ultimately passed due to the SoHo Artists’ Association’s two-year battle with the city for the legalization of loft living in SoHo and set a precedent for how other neighborhoods and cities would approach adaptive reuse of non-residential urban areas.  Then, on January 29, the question on everyone’s mind was, what is an artist?  What are the criteria to qualify as an artist?  Who will decide who is an artist and who is not?  Parameters had to be drawn around an amorphous, murky area that defied confinement.

Because the law was meant to keep fine artists in affordable spaces in SoHo and to keep others, including commercial artists who could afford market rents, out, the definition of an artist had to take this into account.  First of all, unlike in the art world in general, artist certification in SoHo was not based on the quality of work, but on commitment to work, on the seriousness and duration of one’s involvement, no matter what medium.  Certification was also determined by a need for space.