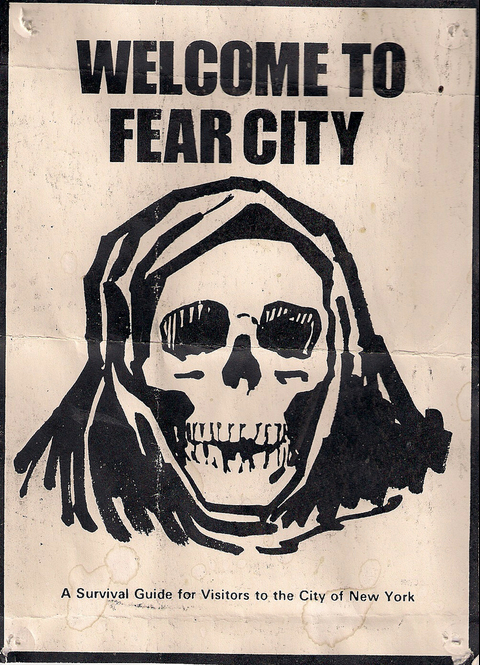 Over the past several years, I have learned much about the history of SoHo writing this blog. I am, however, just beginning to understand the complex historical context in which our neighborhood developed. It did not, after all, appear in a vacuum.

Just this week, I began reading Fear City: New York’s Fiscal Crisis and the Rise of Austerity Politics, an excellent new book by Kim Phillips-Fein, historian and friend of SMP. The book takes an in-depth look at New York in the mid-1970’s, when it was on the brink of bankruptcy, as well as the aftermath of the austerity plan that would eventually bring our fair city back to life. Kevin Baker of The Guardian says of the time:

New York’s fiscal crisis of the mid-1970s is surely one of the weirdest moments in the history of the city – indeed, of the United States. It was a time when the wholesale disintegration of the largest city in the most powerful nation on earth seemed entirely possible. A time when the American president, Gerald Ford – egged on by his young chief of staff, one Donald Rumsfeld – sought not to succour New York but to deliberately shame and humble it, and perhaps even replace it as the world’s leading financial centre.

This moment provides an important context for what was unfolding in SoHo at the time. It was, I think, the decline of fiscal-crisis New York and the very real possibility of “wholesale disintegration,” a we-have-nothing-to-lose attitude, that allowed creative centers such as SoHo to flourish unchecked. Phillips-Fein elaborates on this idea in her book:

Even the stirrings of creativity and resilience [in New York City], … were very closely linked to---indeed, were made possible by---the poverty of the city. The artists and musicians who clustered in the cheap apartments of Alphabet City and the Lower East Side mocked the commercialization of art, adopting an aesthetic that flaunted the absence of money. “No Wave” art, music, and film were defined by their low production budgets; they relied on urban disinvestment, sustained by the low rents of lofts, warehouses, apartments that no one else wanted. In downtown lofts that had once housed small manufacturers artists decorated makeshift theaters with old furniture, abandoned commercial signs, tossed-out tinsel, crutches, and children’s toys to perform works that were half confession, half provocation. (p. 54)

The title of the book, Phillips-Fein explains, alludes to the pamphlet “Welcome to Fear City” (see below for pamphlet):

The book was named for the Committee on Public Safety pamphlet, which itself seems to be an ironic twist on Lindsay's "Fun City" - although I meant to suggest that "fear" in the city has to do with many more political issues (ie, it's not just fear of crime and violence) and that that fear, among elite groups, winds up making possible many changes that would have been almost unimaginable otherwise.

The pamphlet, whose subtitle is “A Survival Guide for Visitors to the City of New York,” sports a creepy drawing of a hooded scull on its cover. It was produced and distributed by the Council for Public Safety, a group of uniformed service unions that included the police offices, fire fighters, and corrections officers. Although circulation of the pamphlet was halted soon after it began, the tourists who did receive a copy as they entered New York through JFK must have been tempted to immediately return from whence they came.

The pamphlet offers nine tips to visitors, including gems such as:

The  pamphlet's introduction wishes visitors “good luck,” and also provides some insight into the who and why of the pamphlet, though neither are ever plainly stated:

The incidence of crime and violence in New York City is shockingly high, and is getting worse every day. … Now, to “solve” his budget problems, Mayor Beame is going to discharge substantial numbers of firefighters and law enforcement officers of all kinds. By the time you read this, the number of public safety personnel available to protect residents and visitors may already have been further reduced. Under those circumstances, the best advice we can give you is this: Until things change, stay away from New York City if you possibly can.

In order to bring New York City back from a fiscal point of no return, Mayor Beame instituted severe austerity measures that affected all city departments, including those related to public safety, after President Ford famously refused to bail the city out. The Council for Public Safety disagreed with these measures and put out the brochure to highlight their consequences.

It was widely assumed at the time that the only way to save the city was to radically cut spending and encourage development in the private sector through tax breaks and other incentives (though Phillips-Fein might say otherwise). The "timely" arrival of these incentives, which coincided with the moment when loft living was no longer considered something akin to squatting and became chic instead, may have contributed to the already-brewing perfect storm that led to the rise of loft living in New York.

I asked Philips-Fein about SoHo during the fiscal crisis years, and she said that she “was struck by the extent to which the neighborhood was already viewed in terms of gentrification--the kind of conflict over the city's future that I argue was being fought out through the fiscal crisis more generally,” and then refers to a 1974 SoHo Weekly News article that argues to the effect that SoHo had turned from “an insular pocket of crudely fixed and mostly illegal lofts” into “a booming mecca for realty entrepreneurs.”

From what I can gather, it was, ironically, the artists themselves that inadvertently put this shift in motion, propelled by the force of circumstance. Around 1970, when SoHo artists reluctantly came out of their “insular pocket” to organize and advocate for the legalization of the live-work lofts to avoid eviction, they started the legalized adaptive reuse ball rolling. Aaron Shkuda argues in his 2016 book The Lofts of SoHo: Gentrification, Art, and Industry in New York, 1950-1980:

... artist groups in SoHo achieved goals that were both modest and significant. Their advocacy led to changes in two regulations that allowed only a limited number of artists to live legally in a loft. Yet these laws were the first to make it legal for anyone to live in such a structure and the first to give government sanction to anyone, artist or otherwise, to live in any former industrial space.

Perhaps one of the reasons SoHo began gentrifying so early is that, once SoHo artists opened the door to city-sanctioned loft living, unlike other areas in New York City, SoHo underwent a metamorphosis through adaptive reuse and not the through the usual channel of displacement of lower income residents with a wealthier group. SoHo never reached a critical mass of resident artists before its demographic began to shift, and those who were there were mostly poor artists who had no power (ie. capital) to fend off realty entrepreneurs.

This is really just a theory. The story or New York’s fall and rise and that of SoHo’s rise and fall (or rise and further rise, depending on who you ask) is obviously much more complicated than I’ve outlined here. I am only beginning to understand the contexts in which New York developed over the past 40+ years, thanks to books such as Phillips-Fein’s Fear City (and Shkuda’s The Lofts of SoHo), a must-read for anyone wishing to delve deeper into what makes our fair city tick.